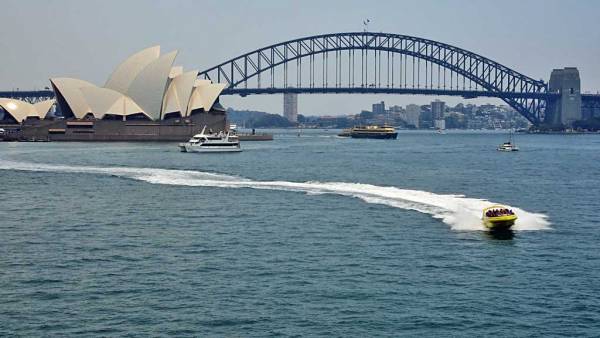 Our Sydney Visit began with an 8 hour flight from Hong Kong. Hong Kong time was 8 hours different from the west coast of the US, but we gave back 3 hours of this in Sydney. Sydney is surprisingly that much farther east of Hong Kong. The flight went over the Philippines, Indonesia and Darwin, Australia.

As we approached Sydney, the smoke started to build from the Australia Wild Fires. Large wild fires were visible below us through the smoke. At the airport, the smell of smoke was strong in the air. Taxis were on strike when we arrived. Strangers approached us offering rides in their cars for $85 Australian dollars. The train at $34 AUD for two people was a much better alternative. The train took us directly to Circular Quay. From there it was a short uphill walk to our hotel at Rendezvous the Rocks. 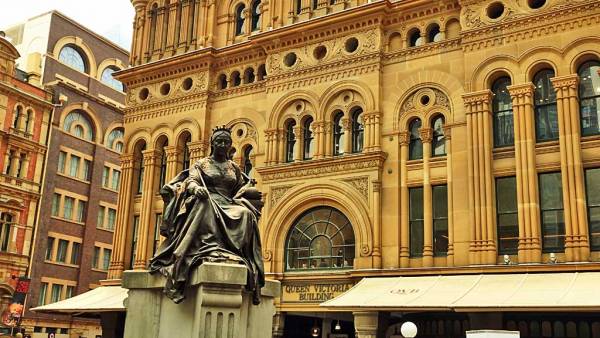 Rendezvous the Rocks didn’t live up to expectation, although we met several guests who swear by it. Rooms were dated. Couches and carpets were worn. The view of the Harbour Bridge and the Opera House were lovely, but every morning a large cruise ship docked, which blocked the view until sunset. Still the hotel has a super location, just a couple blocks from Circular Quay, the ferry docks and the train station. Everything is within easy walking distance. 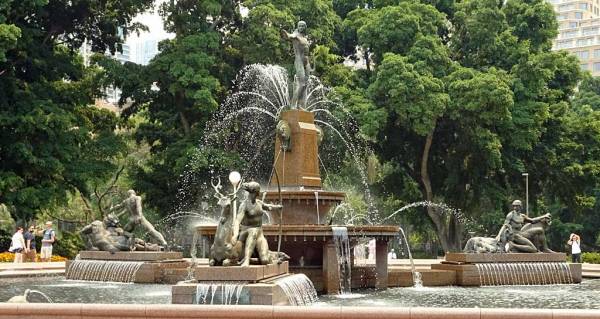 Our first day in Sydney, we were up early. The 333 bus took us from Circular Quay all the way to Bondi Beach. The bus accepts chip credit cards or Opal cards, but not cash. We chose to tap on and off with credit card, which is slightly more expensive that an Opal Card. The downside of the Opal Card is you can’t get a refund for any balance remaining when you leave town. 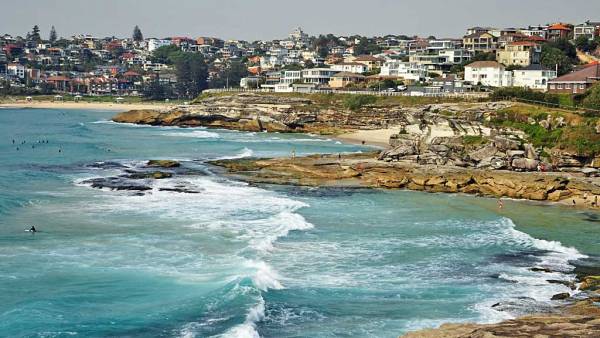 At Bondi Beach, the strolled the waterfront pathway to Bronte Beach. The views of the beach, the rocks, wild birds and surfers were great. Then we turned around and took the same path back to Bondi Beach. The bus stops both ways at the beginning of this trail, so we tapped back on the 333 bus and returned to Circular Quay. 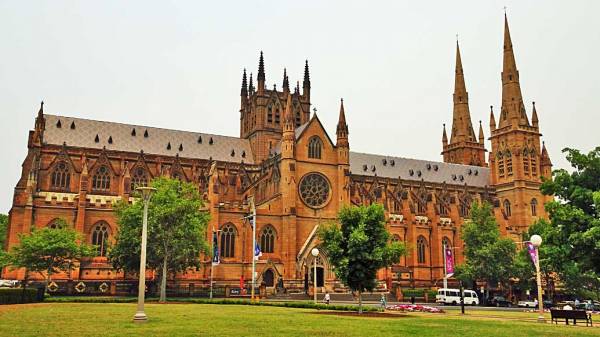 In the afternoon, the trees in the Royal Botanic Gardens provided relief from the 30C heat. After visiting McQuarries Chair and admiring views of Sydney Harbour, we walked south to the Domain. The Domain is another large public park area adjoining the Botanical Gardens. Next we walked to Hyde Park, which includes St Mary’s Cathedral, the Archibald Fountain and the Anzac Memorial. 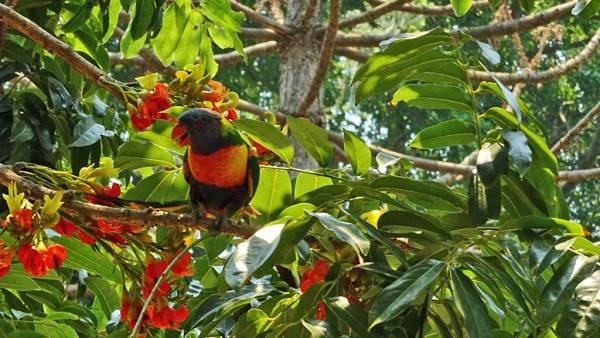 At Circular Quay we discovered the many restaurants inside the Gateway. The pulled chicken bowl at Oporto was a big hit, which led to a repeat visits throughout our stay. That evening we walked out to the Opera House. The Opera House is very busy in the evening with its own pub and restaurants. The views back to the Harbour Bridge and the city are magnificent.

On our second morning we took the short walk to the harbor to catch the Manly Fast Ferry. The Manly Fast Ferry was jammed with people commuting to downtown, but the ferry was basically empty for those of us heading to Manly instead. In Manly we walked the few blocks of the main strip from the harbor to Manly Beach on the opposite side of the island. Then we took the short stroll to Shelly Beach. The atmosphere was laid back compared to the hustle and bustle of Sydney.

Manly was a special spot for us to visit, because our daughter had worked there while traveling Australia years earlier. We took pictures of the ice cream shop where she spent the hot summer days serving ice cream and fighting off marauding sea gulls. Strange to think a place so far away from home had a history for our family. 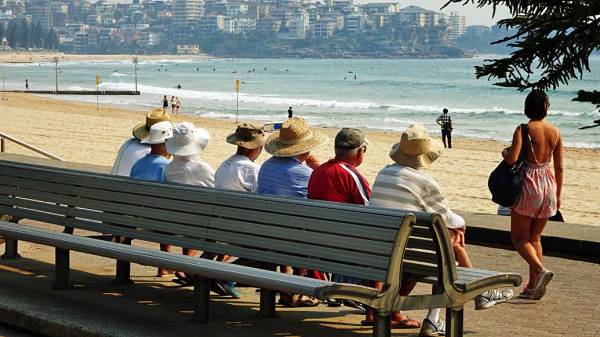 On our last morning in Sydney Visit we walked up hill from our hotel in the Rocks to the Observatory. The walk climbs almost to the height of the cars crossing the Harbour Bridge, but ducks underneath instead. From there we walked down to Darling Harbour. The Darling Harbour area was very busy with people arriving to work. One of the coffee shops in a covered square had more than 30 people lined up to buy coffee before work. Along the waterfront promenade we were suddenly almost all alone.

The Darling Harbour waterfront is home to evening restaurants, the Sydney Aquarium and the Maritime Museum. Originally we planned to take the ferry from Bangaroo back to Circular Quay, but we just missed it by a few minutes. So we ended up walking all the way to Dawes Point and back to Circular Quay along the waterfront. Construction in Darling Harbour will soon be completed to make the walk a completely waterfront stroll. 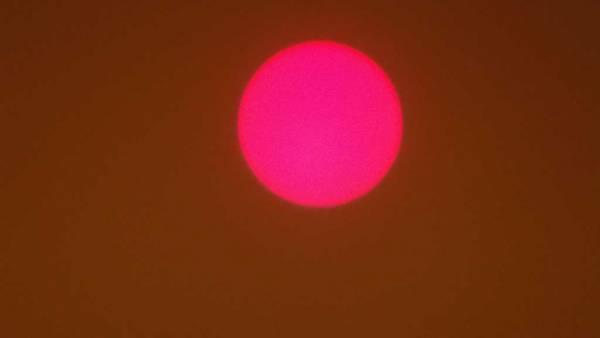 After our Darling Harbour walk, it was time to catch our cruise on the Oceania Regatta. Unfortunately the Regatta is a small ship, so it docks at White Bay Cruise Terminal instead of Circular Quay. The White Bay Cruise Terminal isn’t easily accessible by ferry, bus or rail. Redy2Go saved the day with their online shuttle booking. The Redy2Go van picked us up at our hotel. After a couple stops along the way, we boarded the Oceania Regatta for our cruise. First stop – Brisbane. 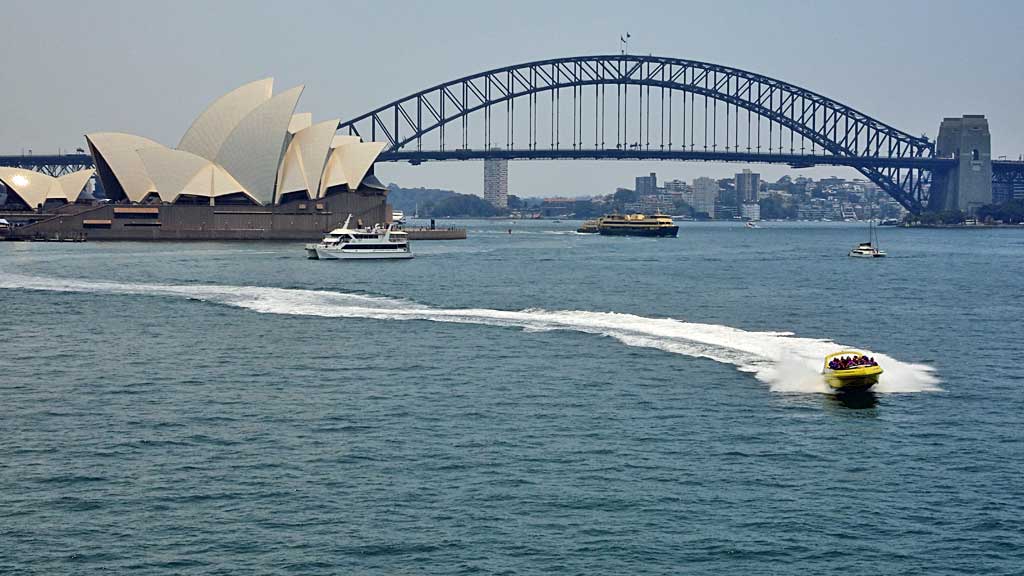 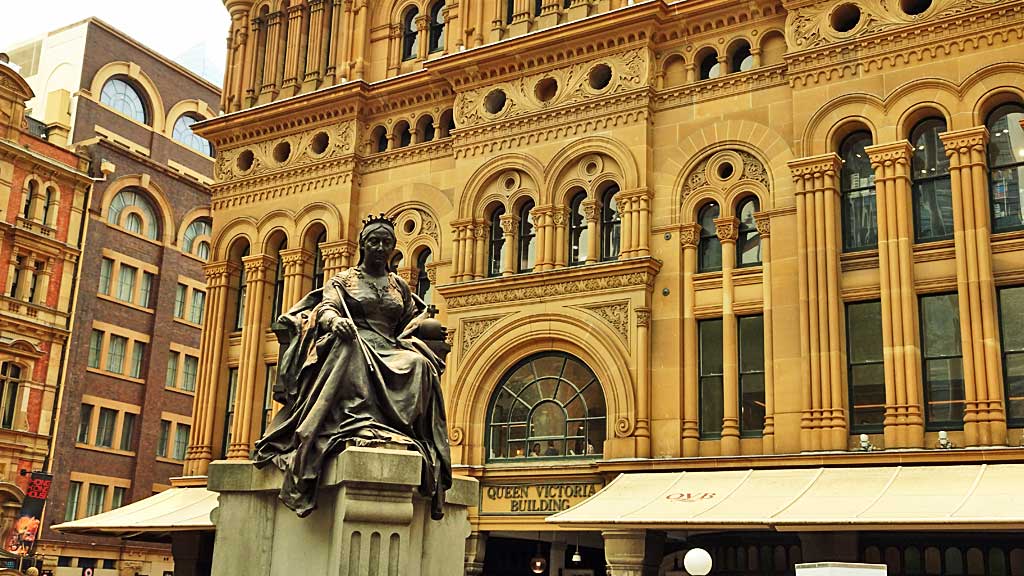 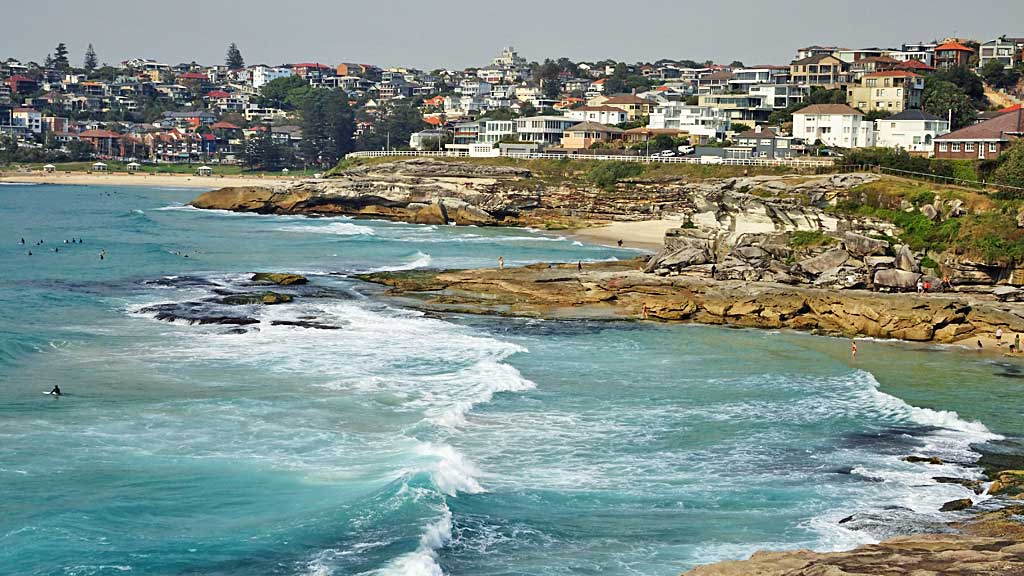 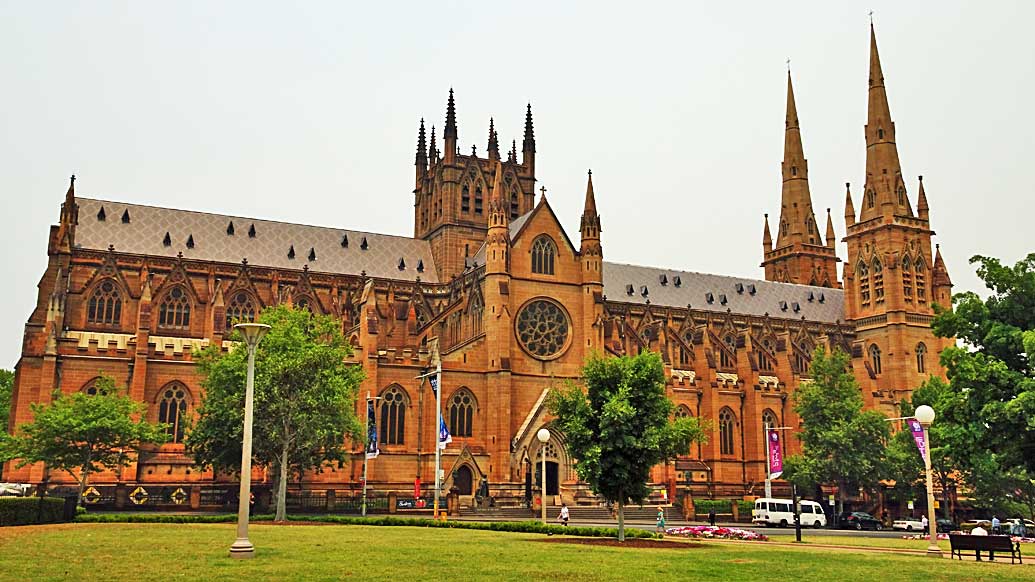 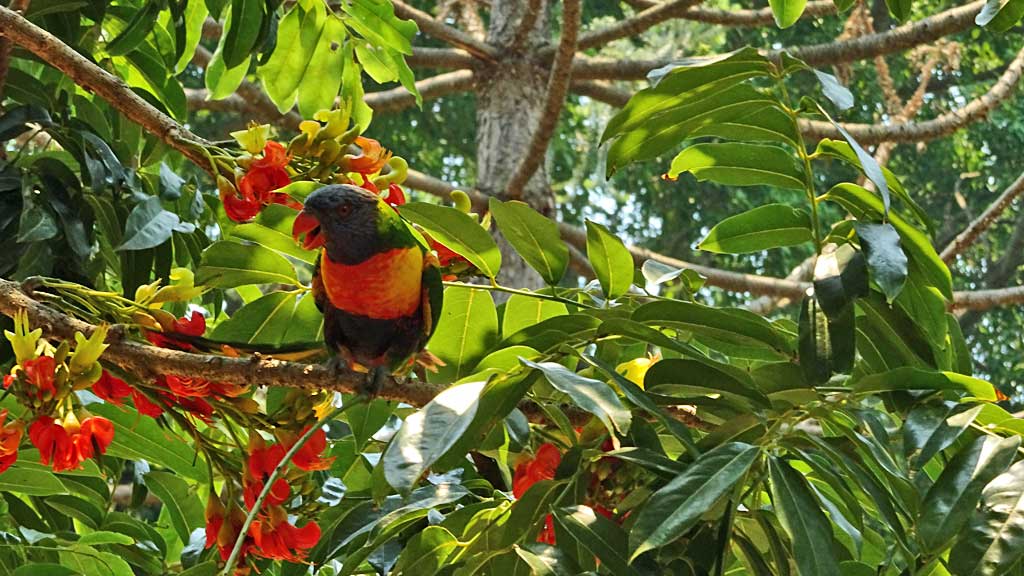 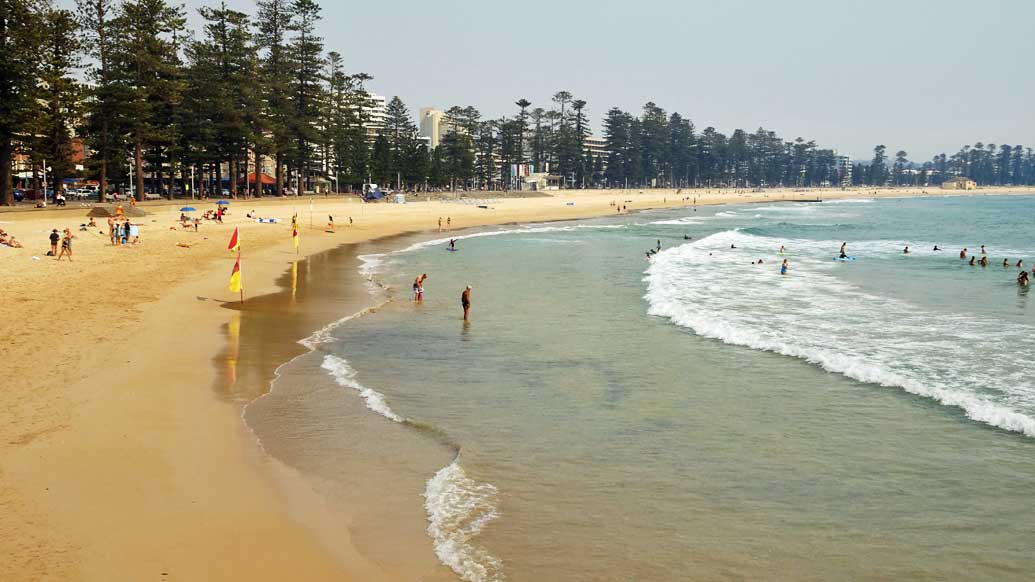 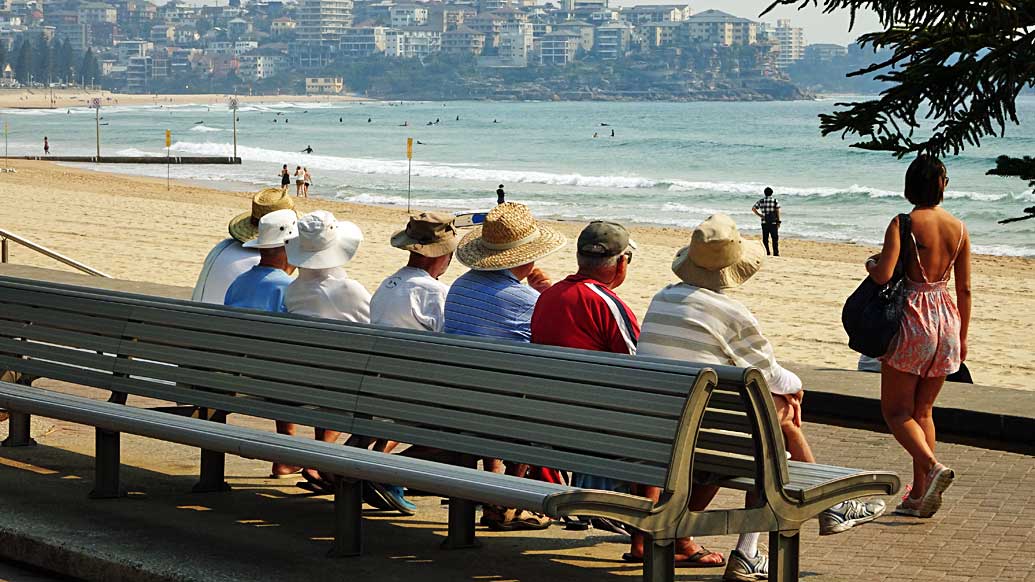 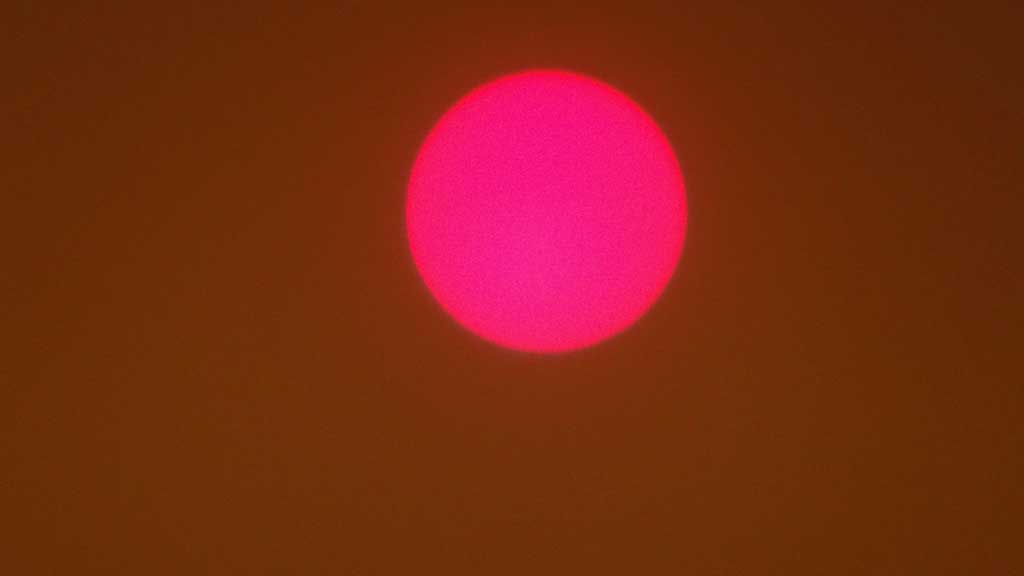