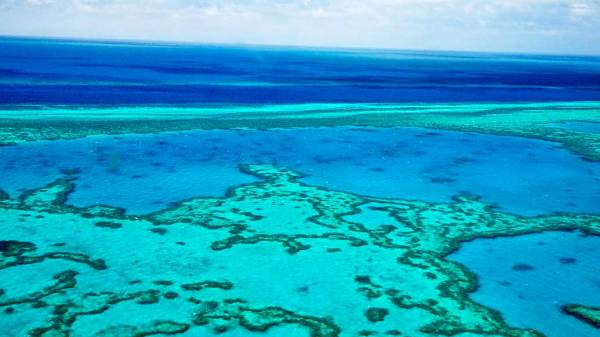 Air Whitsunday picked us up at the cruise terminal at Airlie Beach after we tendered ashore. All 5 people on the flight were Oceania Regatta passengers. The drive to the inland airfield took just over half an hour. A classic De Havilland Beaver aircraft was waiting for us. The De Havilland Beaver is famous for its popularity with Canadian Bush Pilots. Harrison Ford is also known for flying one.

This De Havilland Beaver had wheels under the pontoons so that it could touch down on land or on water. Our pilot Simon’s missing teeth didn’t instill much confidence at first. We soon learned that was a competent pilot and the perfect host. 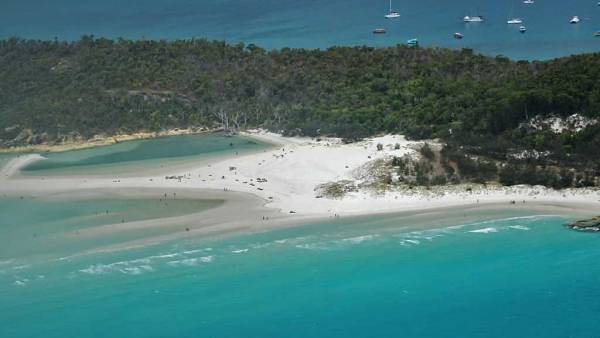 From the airport we flew over Airlie Beach. The waters around the town were beautiful blues. Then we crossed over Hook Island under a thick cloud layer.  After that we continued on to Hardy Reef on our Great Barrier Reef Shore Excursion. Just as we reached Hardy Reef, the sun came out. The plane dropped down to 300 feet as we passed over Hook Island and the famous tiny Heart Island. My wife spotted a manatee as we flew. 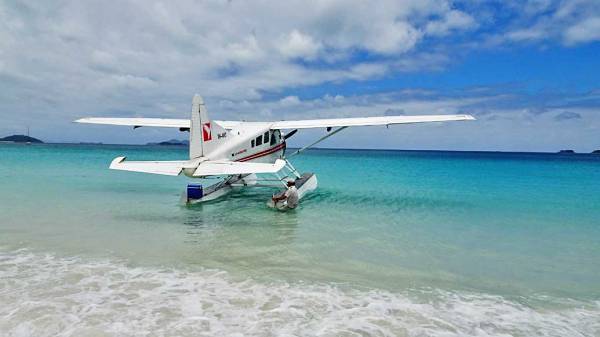 After visiting the Great Barrier Reef, we continued our Great Barrier Reef Shore Excursions by flying to Whitsunday Island. The pilot previously warned us the winds that day might prevent a sea landing at Whitehaven Beach, but we had the pleasure of an easy descent. Prior to landing, the de Havilland Beaver circled around Whitehaven Beach, so we got great views. We landed well down Whitehaven Beach at a great distance from the hordes of visitors who arrived on two hour one way cruises. 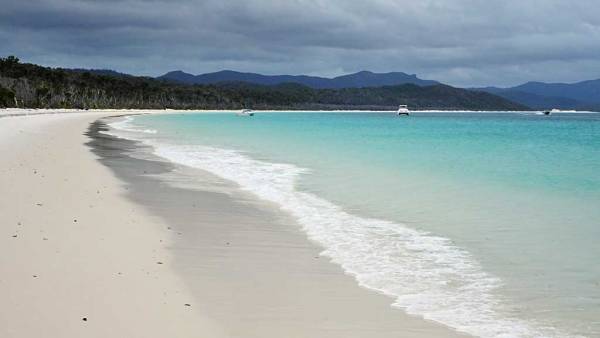 The weather was cloudy during our one hour stay on Whitehaven Beach, but that made the visit pleasant. The wine, crackers and cheese provided by our Air Whitsunday pilot Simon also added a nice touch. The white sand at the beach is silica based, so it never gets hot. The water was comfortable and refreshing. No stingers were present in the water, but Air Whitsunday provided stinger suits if you wanted to wear them for a swim. 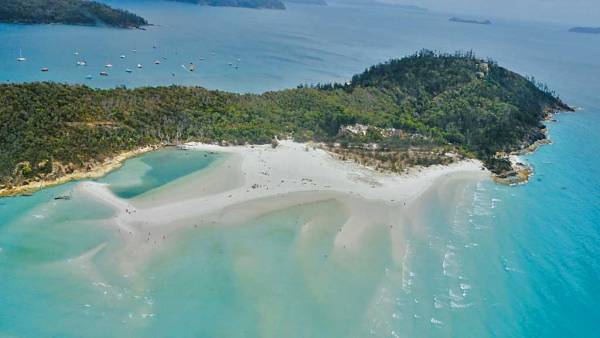 After an hour at the beach, we waded back on to the pontoons of our plane. From there we flew over Hamilton Island and back to the airport. Our Air Whitsunday flight to Whitehaven Beach and the Great Barrier Reef was a complete pleasure. 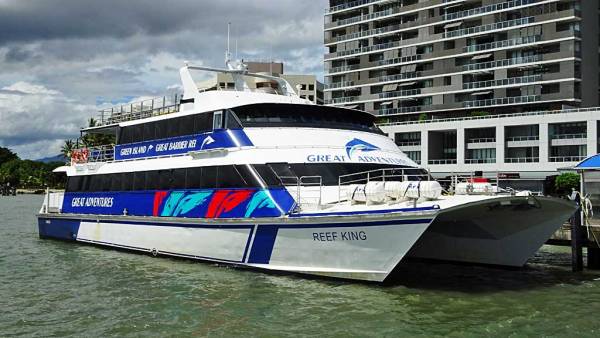 Our second Great Barrier Reef Shore Excursions experience started about 5 minutes from where the Oceania Regatta docked in Cairns. We boarded a Great Adventures catamaran. The catamaran started out in a rain storm and rough seas. Some people got very sea sick. After an hour, we reached Green Island, which was in full sunshine. We dropped some passengers at Green Island and added some new ones. Then we cruised another hour to the Great Adventures pontoon at Norman Reef. The catamaran tied on to the reef and the rain started again. 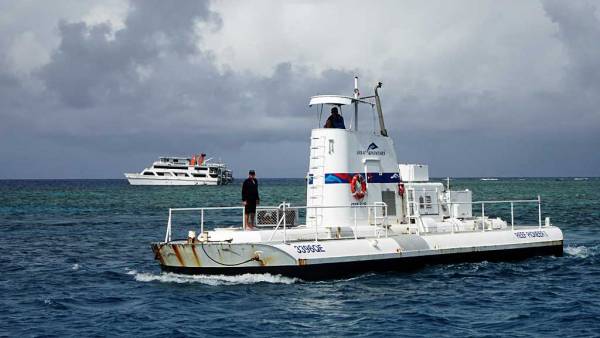 The semi submersible was our first choice for an activity because of the rain. The semi submersible bobbed around for more than half an hour along the reef. The reef contained many large super large hard corals and some colorful soft corals. Lots of tropical fish we feeding and skirting around through the coral. Another person kept exclaiming that this was so much better than her experience the day before. She also said it was so much calmer today, which was kind of hard to believe. 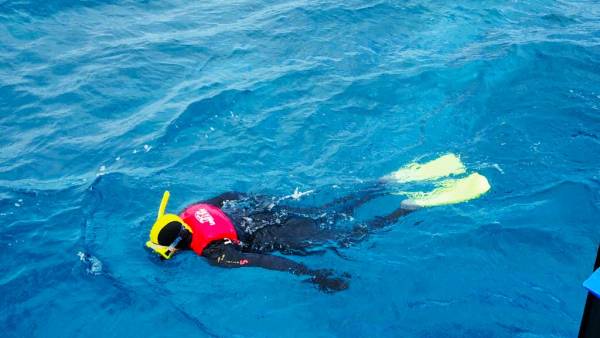 After the semi submersible, we chose to have the buffet lunch and watch the rain come down. We took our buffet lunch back on board the catamaran, which was out of the wind and rain. When lunch was done, you could see that one more rain storm was coming before the sun could break through again. I decided to go Norman Reef snorkeling just at the end of the rain storm. With more than a hundred people on the excursion, only 3 people were snorkeling at that point.

The Great Adventures equipment was impressive for Norman Reef Snorkeling on our Great Barrier Reef Shore Excursions. Great Adventures included stinger suits, quality masks, an excellent mask defogger and nice fins. Staff were extremely helpful and kind in assisting everyone. Although you didn’t need a stinger suit, I chose to wear one. Also with the deep, choppy water and no partner, I chose to wear a life jacket. 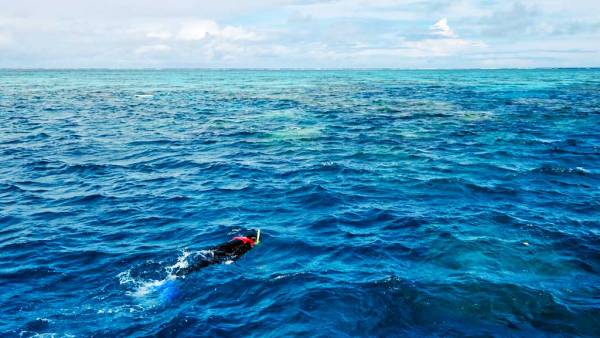 The ocean water was a perfect temperature for snorkeling. It was more than 30 feet deep at the pontoon. Large fish and small silver sides stayed under the pontoon and around its edges. A short swim led to large mounds of coral with tropical fish skirting about the top area. Parrotfish, butterflyfish and angels were busy darting about and snacking on coral. Beautiful blue soft coral were spreading out on some surfaces. I swam along a wall of coral and hovered over some of the mounds, enjoying the experience.

Near the pontoon you could snorkel over top of the divers below. You could also snorkel very close to the snuba divers and watch the tropical fish dart around their helmets. Although there were several divers and snubas, I only saw one other snorkeler. 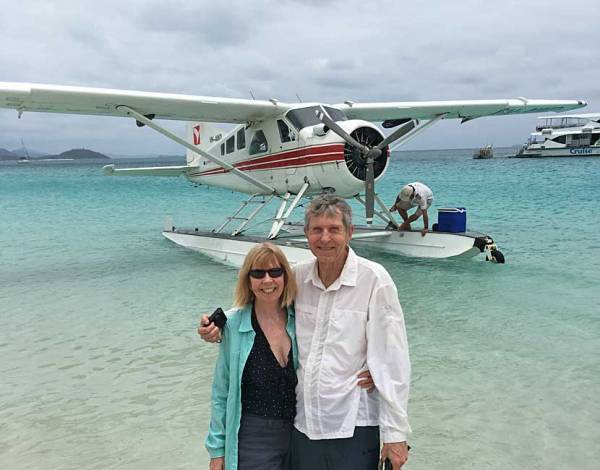 After returning to the snorkel deck on the pontoon for a short rest, I decided to take one more trip out. Someone else was raving about the skinny little fish close by. Snorkeling along the deck a large school of tiny, slender, blue minnows soon appeared. These tropical fish reminded me of silver sides that I’d seen in the Caribbean, but these glowed blue at certain angles.

When the sun came out, I enjoyed watching inexperienced Asian tourists trying to snorkel. Despite instructions in their native language, many tried the breaststroke or a dog paddle. So, lots of people could not advancing in the breeze. Some only managed to get a few feet from the pontoon after a valiant effort.

My excursion to the Great Barrier Reef with Great Adventures was a worthwhile experience which I’m glad I did. However, a friend and I both commented that we enjoyed French Polynesia more. We also enjoyed snorkeling at Pink Beach at Komodo Island a lot more too, which we visited later on during our Oceania Regatta cruise. 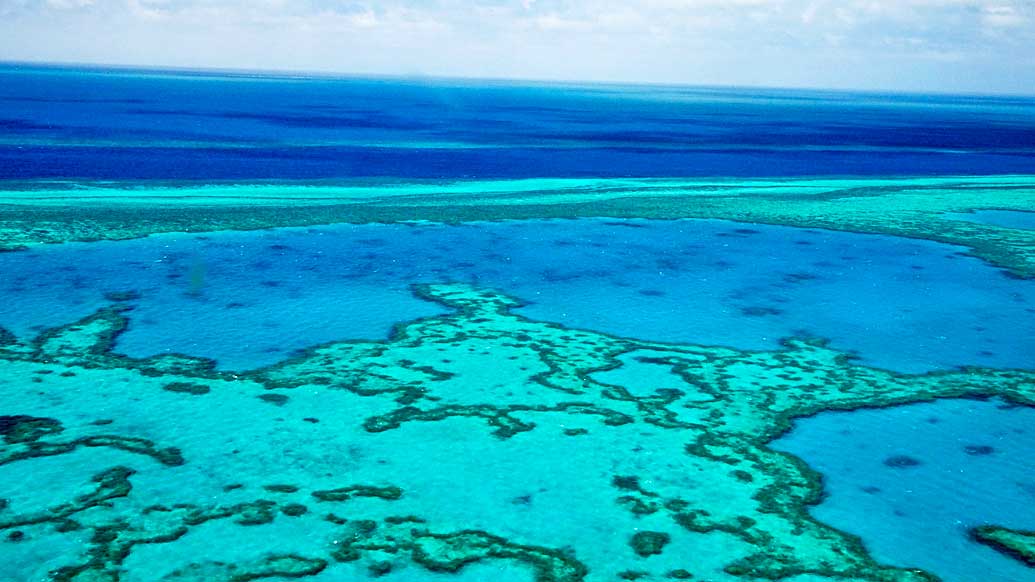 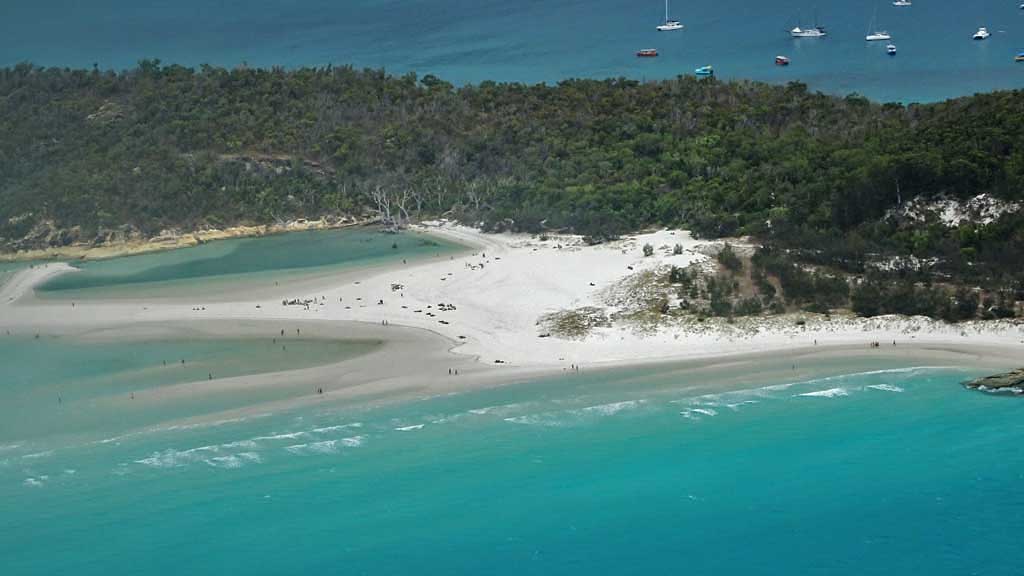 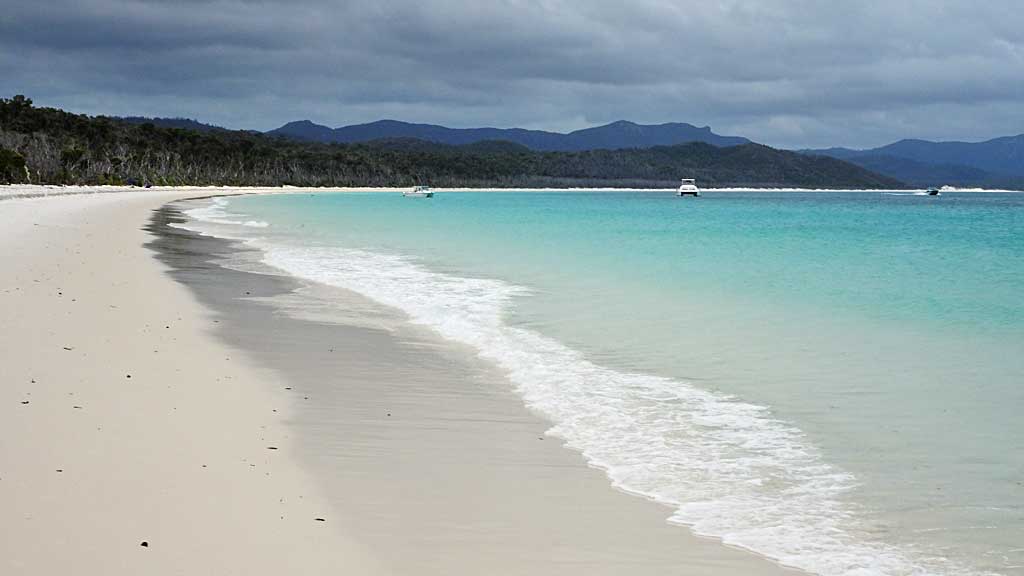 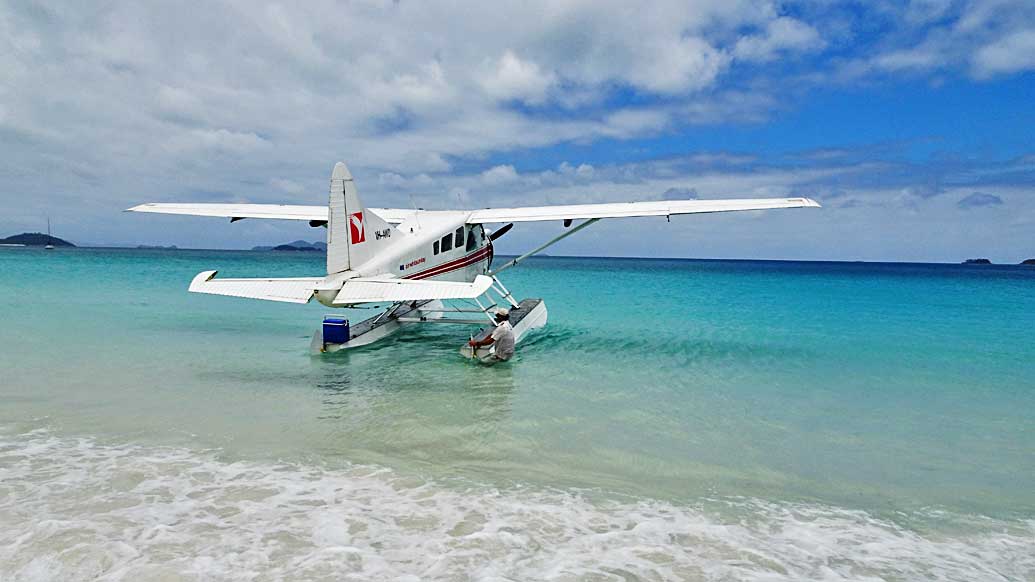 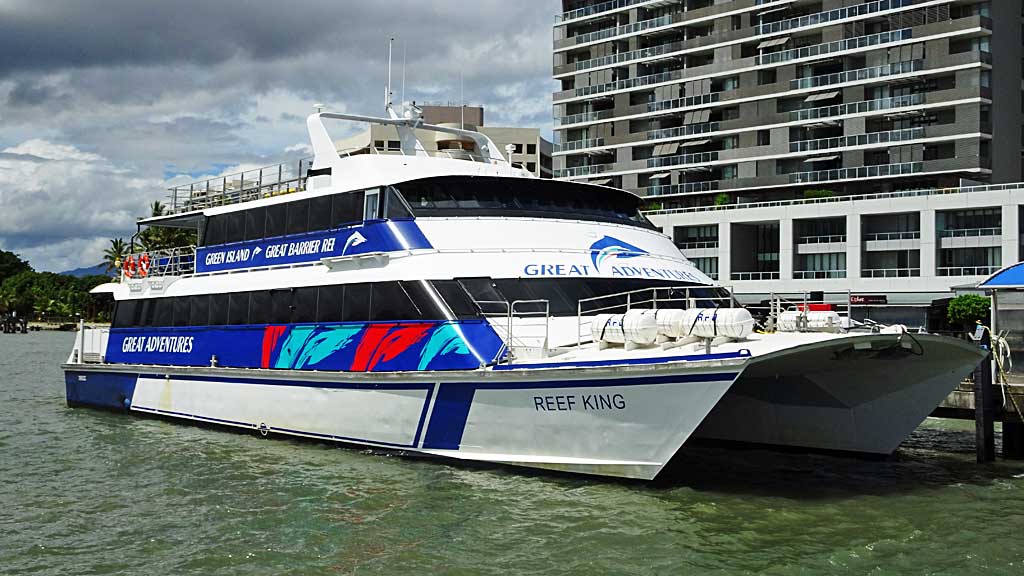 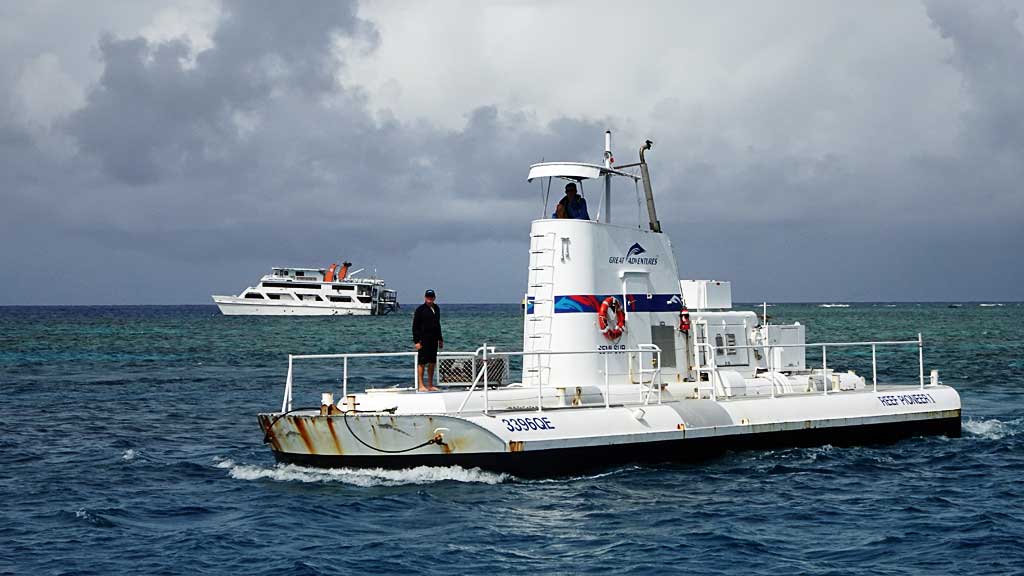 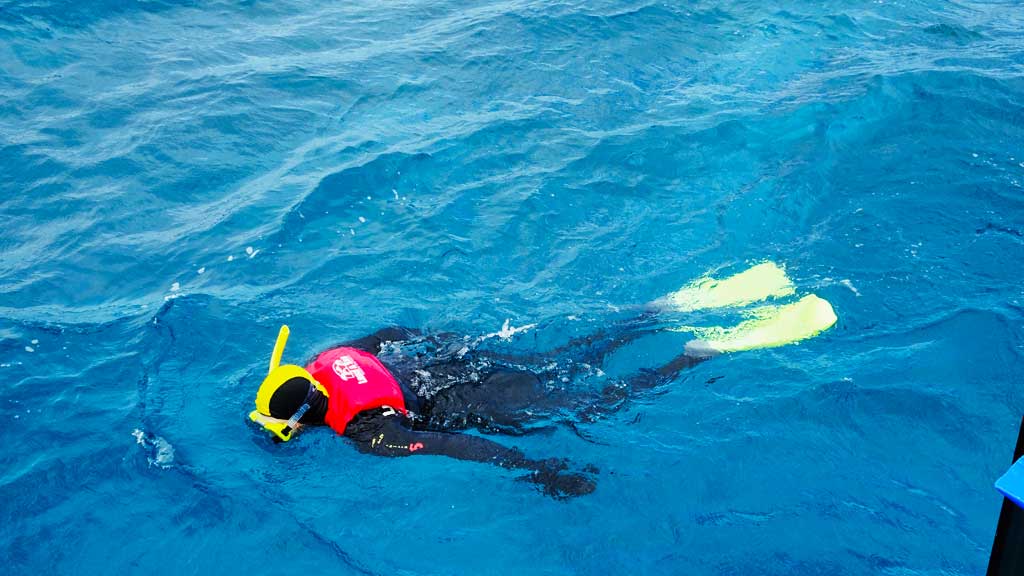 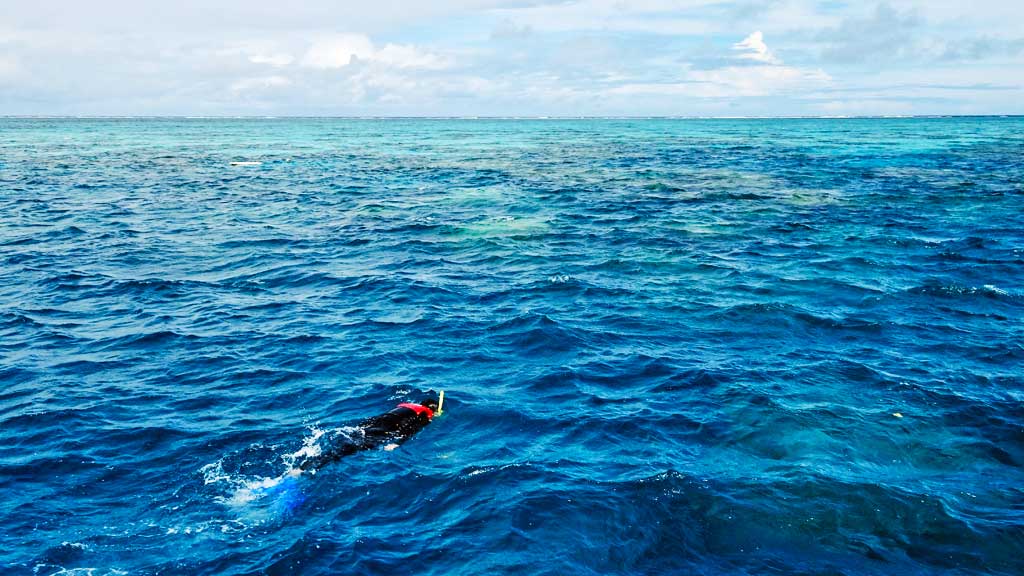