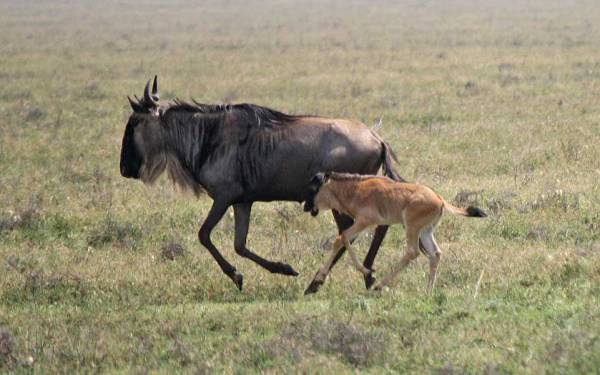 Background for a Serengeti Safari

The Serengeti Safari is a premier wildlife destination. The park is gigantic. It covers nearly 6,000 square miles (15,000 sq km).  Over a million wildebeest live within the park boundaries. They follow an annual migration route clockwise through the park based on rainfall patterns.  Zebras travel with them and intermingle. Both species calve their young starting in February in the southeastern section of the park.

Lions, leopards and cheetahs do not follow the migration, but depend on it for their survival.  Gazelles are common in the park and use vegetation for their source of water, so they travel widely without concern for the season.  Elephants and hippos are less common and are concentrated in areas where reliable water sources are available.  Rhinos in the park are nearly extinct. They are protected and their location is not disclosed for public visits.

The park prohibits the Maasai from living within its boundaries.  The Maasai were forced to move out when the park was formally established in 1951.  They now live in the Ngorongoro Conservation Area, bordering the Serengeti. Wildlife lodges in the Serengeti are controlled by the park system. 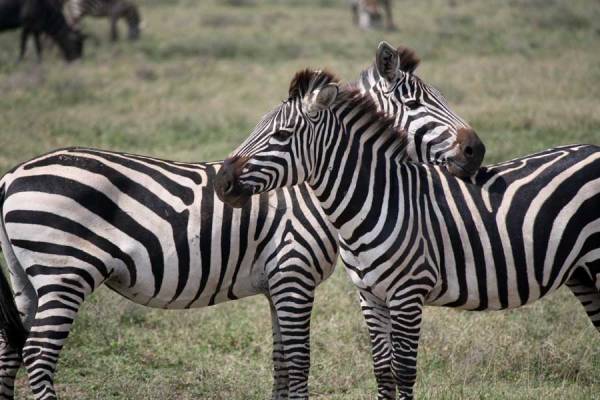 With an elevation of around 5,500 feet (1,700 m), the climate on the Serengeti plain is temperate.  There is little change in temperature throughout the year.  Expect average highs in the 80s F (27 C) and average lows in the 50s and 60s F (13 C).  Humidity is very low.  The best description of the weather is pleasant.

The wildebeest and zebras migrate through the park following the rainfall pattern, so safaris need to follow the rain too for better wildlife sightings.  February is a great time to enter the southeastern portion of the park, because of all the newborn wildebeest and zebras.  Rainfall in March and April destroys the gravel roads and puts an end to many safaris.

Serengeti Safari – Get There

The Serengeti is reached on the Tanzanian side by descending the slopes of Ngorogoro Crater on to the high plain.  Nabi Gate marks the controlled entry point to the Serengeti National Park.  After that, travelers are dependent on their safari lodge or the supplies in their 4×4.  Nabi Gate also marks the transition point where vehicles must drive on the park’s gravel roads.  In the adjoining Ngorongoro Consveration Area, vehicles are allowed to drive anywhere. 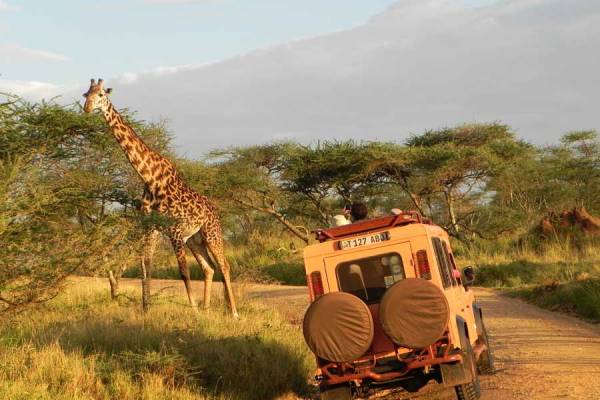 The Nabi Gate park entrance is located at a large treed rock rock hill with excellent views over the plains.  A herd of elephants was busy destroying trees by eating them.  Two elephants were about 15 feet away from the Nabi Gate parking lot when we stopped.  We climbed the hill for a view.  The elephants below were forcing all traffic to stop, while they crossed the gravel road.  Next, we gazed out on the plain and could see a long line of zebra and wildebeest extending as far as the eye could see.  They were all heading the same direction. 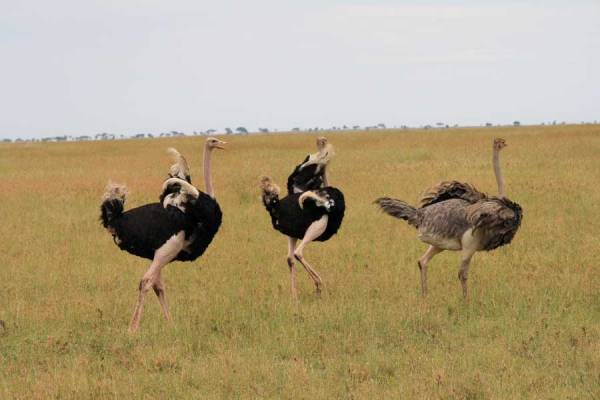 There were three game drives from the Seronera Wildlife Lodge on our first full day.  The early morning game drive left at 6:30 and the sun came up during the drive.  It was cloudy and quite cool in the open topped Land Rover. We saw lots of hippos scurrying on land near their pools. Hippos graze during the night and return to their pools during the heat of the day. I was surprised at how quickly the hippos could move on land.  Our guide then noticed a dead impala hanging from a tree.  It took some good binoculars to make out the leopard in the tree beside its prey.

The mid day drive was not only cool, but we also had light rain at times. A long sleeved shirt and a rain jacket were not enough to prevent a chill and I caught a cold that lasted several days.  The one interesting sighting we had was two male and four female ostriches involved in mating rituals.  They fluffed their feathers and circled in erratic patterns that were very entertaining. 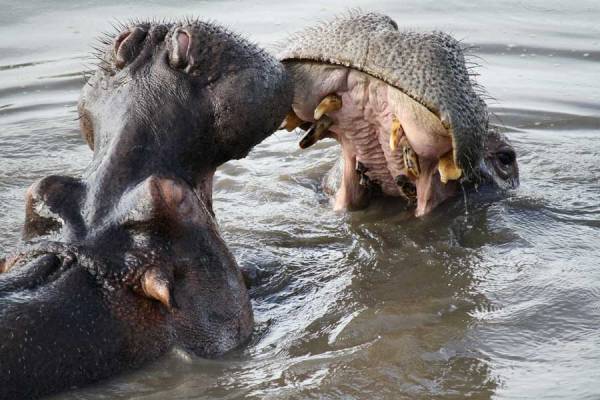 In the evening, we then took a long ride to a well known hippo pool.  It was quite amazing to be at close range on an embankment and see 30 – 40 hippos, plus a couple of crocodiles at close range.  Hippos can share the same space as crocs, but they must be careful to ensure the crocs don’t munch on their youngsters. Lots of unfriendly jostling and snorting made for a chaotic scene. A couple of them were involved in play fight that gave us clear views into their gigantic mouths.

The thing you can’t capture on film is the horrible stench of a dense population of hippos.  They are wallowing in a mixture of water and their own excrement.  At one point a hippo used it’s tail to mark it’s territory by spreading poop just like a fertilizer spreader. 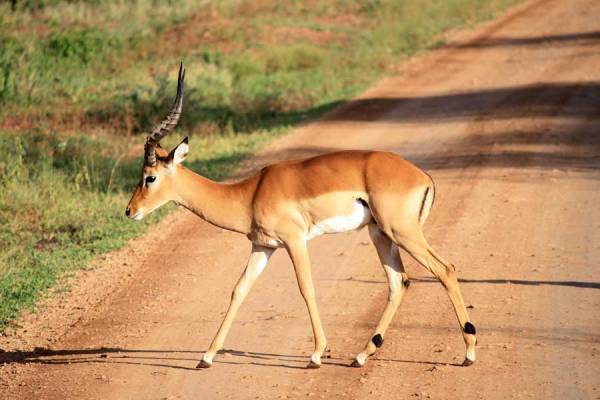 On the way back the setting sun made for great lighting and we saw a breeding herd of impala. It consisted of one male, numerous females and their off spring. There were about 50 animals in the herd. The dominant male spent his time directing and harassing the females.

That night we woke screaming, screeching sounds. Later we were told that a lion or leopard had probably captured a baboon. 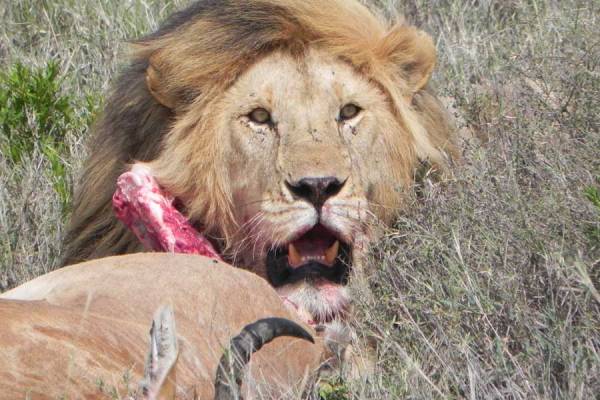 Our last full day on the Serengeti was amazing and all I could have hoped for in a safari.  The cold, rainy weather was gone. We headed out on a long sunny drive to the kopjes (rock outcroppings) via Nabi Gate.  We hadn’t travelled far before we came across several female lions and their kill near the road side.  One female was eating while the others lounged nearby.  A group of hyenas waited anxiously in a circle and a jackal snuck close for a peak at the potential leftovers. An amazing start to the day. 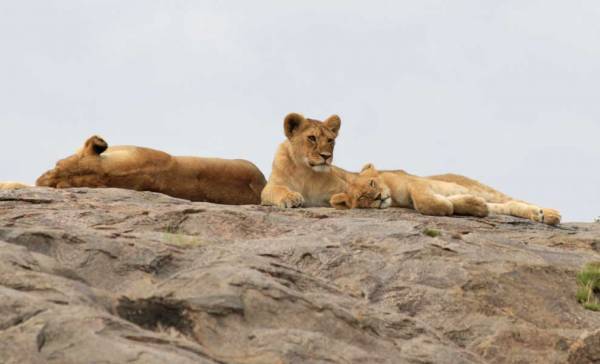 Then we headed out to any area of kopjes, which refers to rock outcroppings.  These tend to be resting spots for lions and cheetahs.  Our driver and guide, Thomas, soon spotted a male lion dragging a hartebeest across the plains.  As we approached, the male lion laid down and started eating. We were able to get uncomfortably close. When you can see a wild lion focusing his eyes on you about 25 feet away and your Land Rover has an open top, it can be a little unnerving.  He only glanced a moment and went back to his meal. 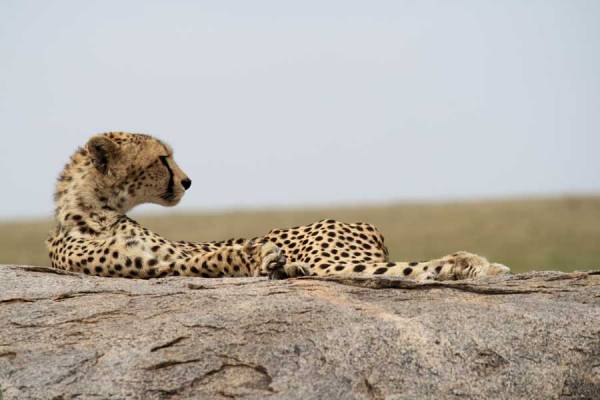 As we wandered past more kopjes, we came across a pride of lions resting on the rock tops.  A few more kopjes later we found a cheetah occupying the top of a rock.  She paid no attention to us as we got within about 25 feet.  Next we found a kopje with two cheetahs resting in it – again at close range. For lunch we stopped under a shady tree at a kopje with a view of the wildebeest migration. 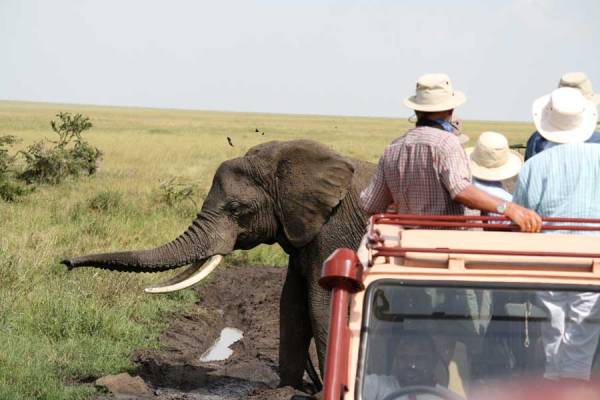 On the way back, near the Wildlife Lodge, we came across a herd of elephants.  When we reached a distance of about 15 feet away, a couple of them lifted their trunks to smell us.  As we passed the group, a male elephant blocked our route.  The elephant actually shook his head to indicate “no” to us. The issue was settled.  We backed up and waited until the elephant left the road.

A few minutes after the elephants, our Serengeti Safari came across a mini migration right beside us. A long line of more than a 100 zebras and wildebeest were moving almost single file across the plains. We were right at the head of the procession.  The two lead zebras paused at the sight of the nearby elephants, causing the line behind to start compressing.  Then they moved forward in a neatly packed line.  It was an amazing sight. 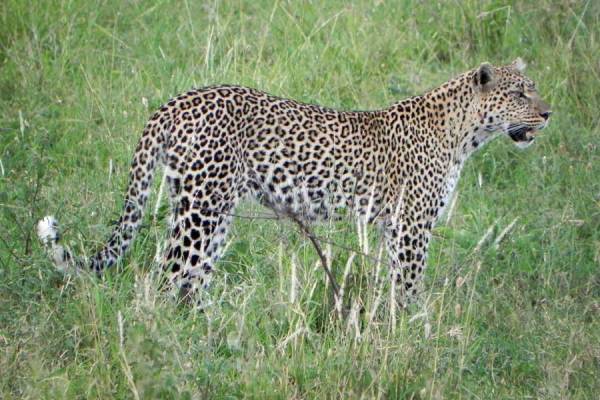 As if that wasn’t enough, Thomas talked to other guides and found out a leopard was nearby. He quickly drove to the location, which already had a lot of spectators. Thomas didn’t waste time and barged into the middle of the vehicles watching a leopard lying under a nearby tree. His timing was perfect, as the leopard then stood up and I got a great photo as it walked away.

I can’t begin to explain how overwhelming this day was. We were at extremely close range with lion prides, cheetahs, leopards, elephants, zebras and the wildebeest migration all in one day.  The Serengeti Safari exceeded my expectations as Tanzania’s premier wildlife destination. 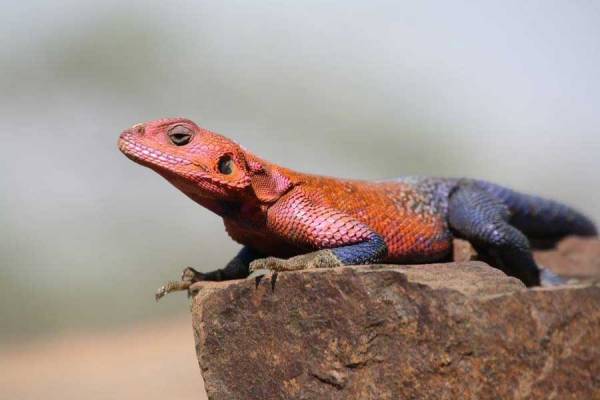 Our Serengeti safari had a large number of bird watchers, which surprised me.  The birdwatchers in our safari were not disappointed.  At Lake Manyara, hornbills occupied the high tree branches.  On the Serengeti plain hornbills seemed to have evolved into species that didn’t require tree.  Meanwhile in the light brush and sparse trees of the Serengeti, colorful small birds were very common.  The velvet breasted roller was my favorite.  Back at the Seronera Wildlife Lodge, an added bonus was the opportunity to see interesting small creatures.  The “spiderman” agama lizard sported brilliant reds and blues.  The hyrax loved to rest on the rocks and sometimes scurried through the lobby of the lodge.