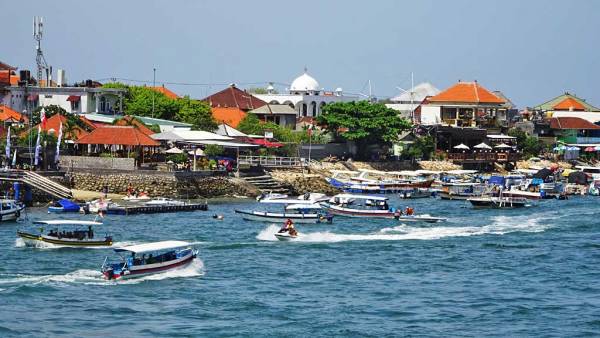 Bali is for Beach Party Tourists

As the Oceania Regatta cruised in to Benoa Harbor, it quickly became apparent a Bali Shore Excursion was going to be completely different than any other port on our cruise. Our captain repeatedly blared the ship’s horn to warn parasails, jet skis, party boats, ferries and towed inflatables that were crossing our path. My main takeaways from Bali are that Balis is for beach party tourists and that the traffic is horrendous no matter where you go. Plan to average less than 20 miles per hour by car no matter what places you plan to visit. 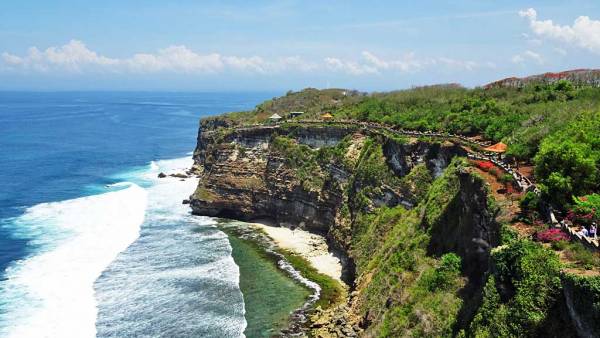 The Oceania Regatta docked at noon. Bali Safest Driver was supposed to pick us up for our Bali Shore Excursion, but our driver was nowhere in sight. My SIM card wouldn’t work on the Indonesian network, so a volunteer at the port used their cellphone to call for us. After two calls and an hour in time, our driver arrived. Even though it was a painful delay, it was better than choosing among the horde of others at the port who were eager and aggressive in trying to gain our business instead.

Our driver turned out to be the nicest person, so we were very pleased that we waited. He told us our route to Taman Ayun, Ulun Danu Beratan Temple and Jatiluwih Rice Terraces was normally at full day tour starting at 8am, despite what they told us during booking. We move quickly through attractions though, so we said let’s just see how far we get. 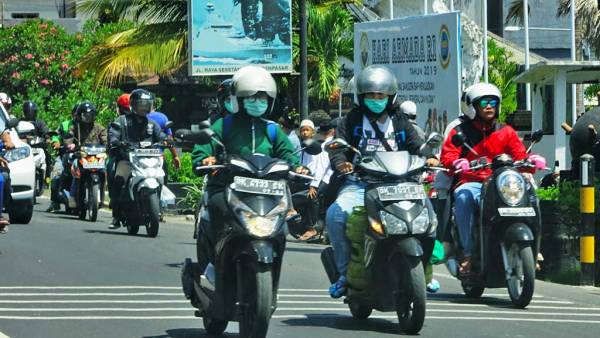 As we left the port, we quickly became immersed in the non stop, bumper to bumper traffic that persists everywhere in Bali. Motor bikes are the only way to avoid the traffic jams, so the streets were full of scooters. The rule for scooters is to drive anywhere your bike will fit. Traffic lights are rare in Bali, so motor bikes and cars press their way through intersections and traffic circles on a first come first served basis. Sometimes a person with a red flag would stop traffic, so that vehicles could back out into the street and join in the circus of traffic. 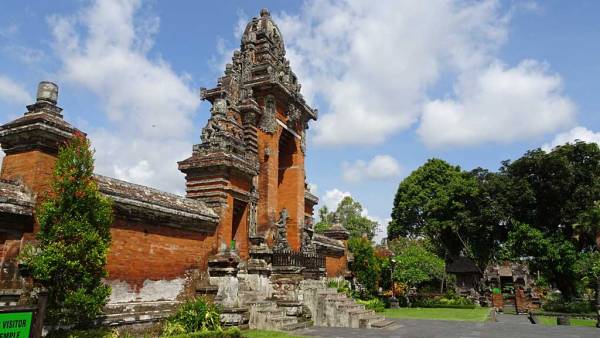 The traffic chaos was entertaining as first. The short distance trip to Taman Ayun took an hour, which means we averaged about 16 miles per hour. By the time we reached Taman Ayun, the novelty of Bali traffic chaos had worn off. The weather was extremely hot and humid in Bali. The winter rains should have started in October, but still hadn’t arrived by late December. A visit of 30 minutes at Taman Ayun left us drenched in sweat. The site was pretty. Hardly anyone else was at this temple site, which made for a pleasant reprieve from the traffic chaos. 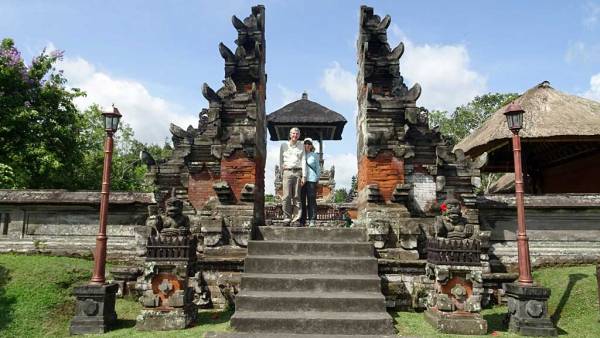 Next we took another ride of more than an hour through slow moving traffic to reach Ulun Danu Beratan Temple on the second stop of our Bali Shore Excursion Day 1. The traffic seldom reached more than 18 miles an hour (30 km). Traffic often stopped completely even though there were no traffic lights. So, we again averaged less than 20 miles per hour on this section of our Bali Shore Excursion too. 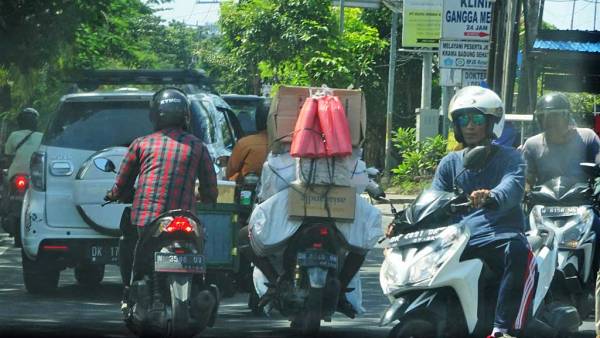 The Ulun Danu Beratan Temple at Lake Beratan is famous as a trademark picture for Bali. Tourists were there in force. The crowds took so many pictures and selfies that it was difficult to enjoy the site. Three Oceania Regatta cruise tours arrived while we were at Ulun Danu Beratan Temple. Our taxi driver indicated the lake often fogs over in the afternoon. Luckily we got brief sunshine on the temples against the backdrop of impending rain. Lack of rainfall had reduced the water level to the point that the temples were no longer islands. Many people crossed the exposed lake bed to get their picture taken right on the edge of the main Ulun Danu Beratan Temple. 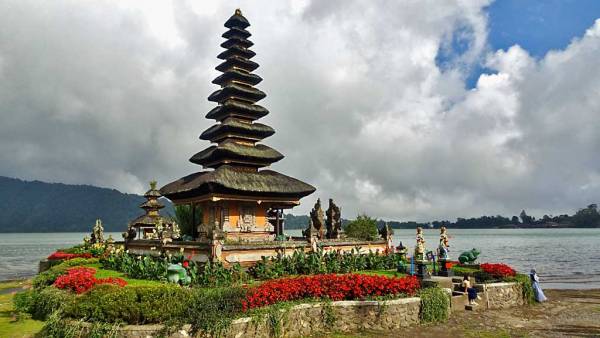 Since we had been so efficient, our driver indicated that we would also have time to visit the Jatiluwih Rice Terraces on Day 1 of our Bali Shore Excursion. The options at Jatiluwih Rice Terraces were to pay a fee to walk through the terraces or to stop at a coffee specialty restaurant with a view over the terraces. The restaurant with a view sounded perfect. Immediately after leaving Lake Beratan, our experience in Bali changed for the better. The road to Jatiharum Luwak Coffee plantation became almost single wide. Buses couldn’t fit on this road. Few cars and motor bikes were interested in using it. The escape from all the traffic and tourists was soothing. 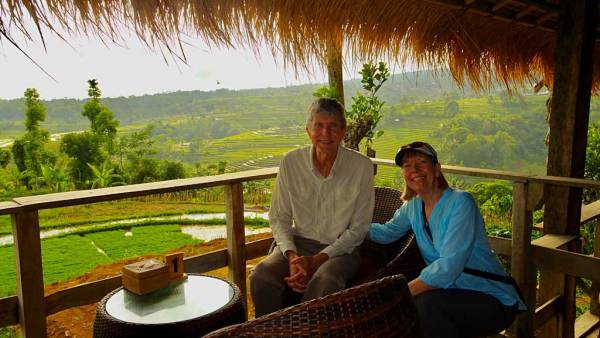 When we arrived at Jatiharum Luwak Coffee an atmosphere of calm set in. The covered patio overlooked an expanse of green terraces as the sun set. Swallows swooped across the fields. Staff wanted us to learn about the history of coffee making and taste samples, but we asked to have their best cup of coffee delivered to a table on the patio instead. The work day was ending, so we were the only customers on the patio.

The moment at Jatiluwih Rice Terraces was mesmerizing – one of those brief moments of ecstasy that makes life worth living. If we hadn’t waited an hour for this particular taxi driver to pick us up, we would never have had this special moment at Jatiharum Luwak Coffee Plantation. I tipped the driver so much that day that I thought he might fall over when he bowed in gratitude. 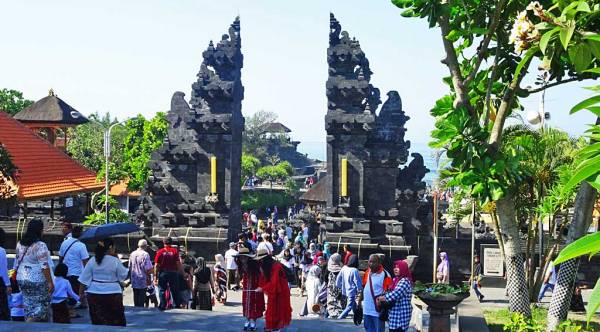 Our second day in Bali only allowed time to visit a couple locations before our afternoon flight to Hong Kong. So, we chose to visit two temples on the oceanfront – Tanah Lot and Uluwatu. These two locations were closer than those of the previous day, but that didn’t make the traffic congestion any more bearable. On this second day of our Bali Shore Excursion we had a new driver who was less skilled and harder to understand. 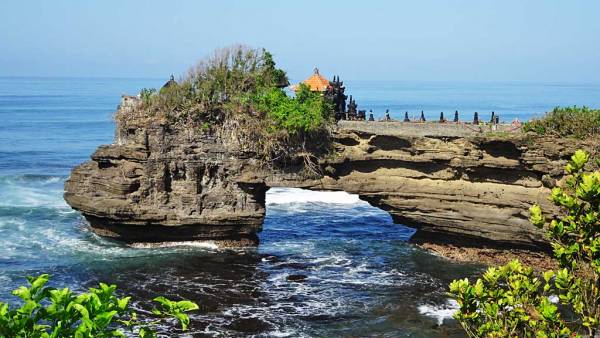 We reached Tanah Lot after about an hour of difficult traffic. A large number of visitors were arriving at the same time. Our driver took us to an entrance that avoided most of the tourists entering the park. This day the weather was extremely hot and humid again. The joy of escaping all the traffic on arrival at the site quickly turned to a desire to return to the air conditioned car. The Batu Bolong Temple at Tanah Lot was picturesque with its approach over a hole right through the cliff side. You weren’t allowed inside the temple. From the Batu Bolong Temple viewpoint, we took the short cliff side walk to Tanah Lot Temple. 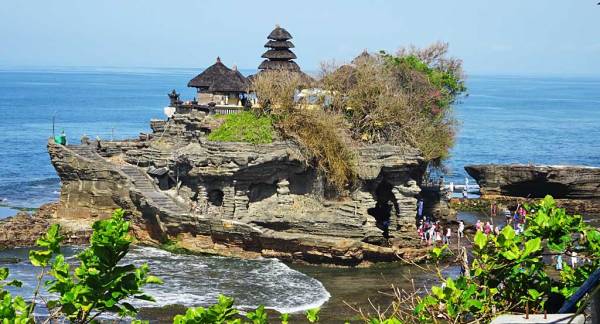 The Tanah Lot Temple left us wondering why this site is so incredibly popular. Hordes of tourist walked out on the rock surface beach front at the temple. The Tanah Lot Temple was fairly difficult to see and not open to the public. So, most people concentrated on getting close to the waters edge. It seemed like the completion of a pilgrimage to the sea for those who had never seen the ocean before. Obviously I’m in the minority in thinking this site was strange.

Next we travelled more than an hour in extreme traffic to reach the temple at Uluwatu. The weather had taken its toll on us and our driver started struggling to stay awake. We implored him to take a break and thankfully he conceded. Not all that surprisingly, taking a break in Bali means stopping with part of the vehicle still on the busy road. Our driver opened the trunk, took out some cold water, splashed his face and announced himself rejuvenated. Turns out he spoke the truth. 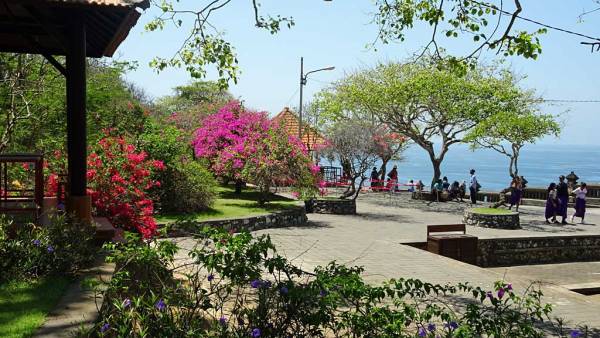 The heat was just as unbearable at Uluwatu, but this site was prettier than Tanah Lot. Red and purple flowering trees adorned the grounds and the hillside. Macaque monkeys rested in the shade. These monkeys had no energy to steal hats and glasses. The heat was too much for them too.

The Uluwatu cliff edge descends perfectly straight down for more than a hundred feet over the sea, which creates an impressive scene. The small temple at Uluwatu isn’t open to the public. An small amphitheater hugs the cliff edge. Nightly sunset performances in the amphitheater are very popular with tourists.

After Uluwatu, we turned down a visit to Jimbaran Beach and headed straight to the airport. We’d had enough of beach party tourists and horrendous traffic. A few hours latter we were in one of my favorite cities in the world again – Hong Kong. 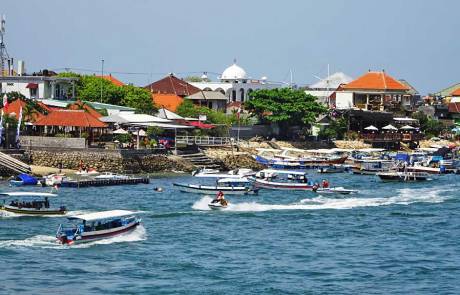 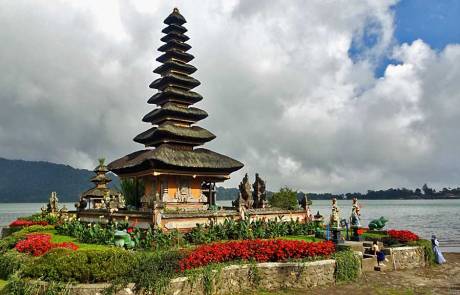 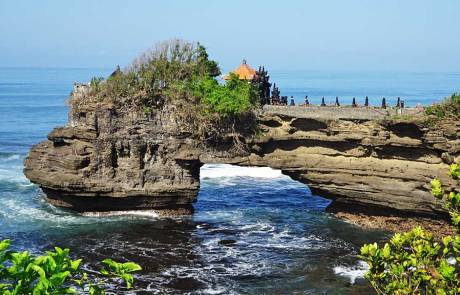 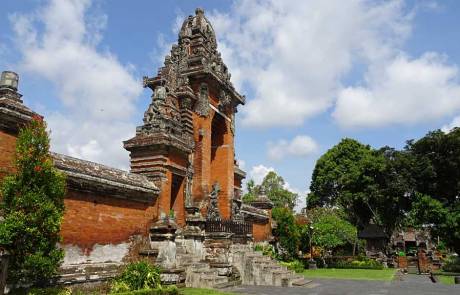 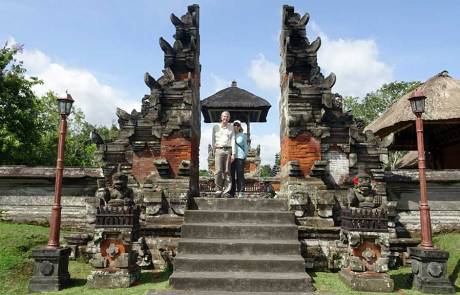 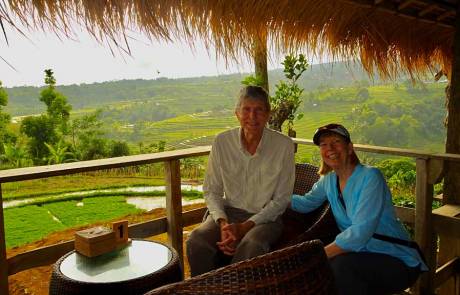 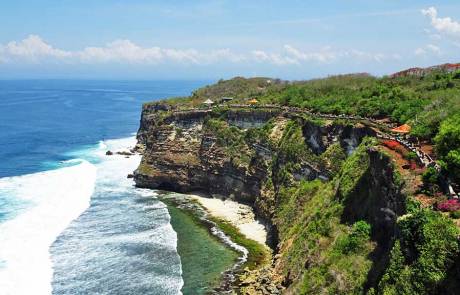 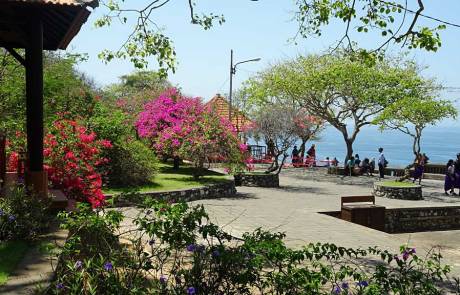 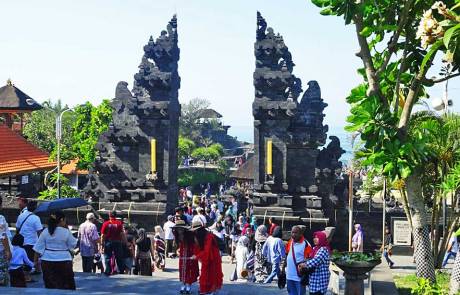 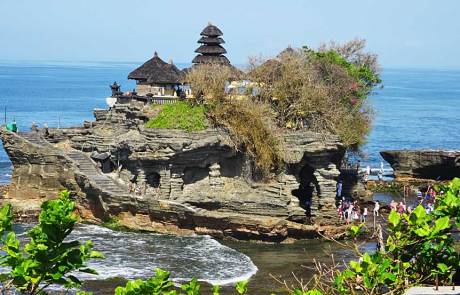 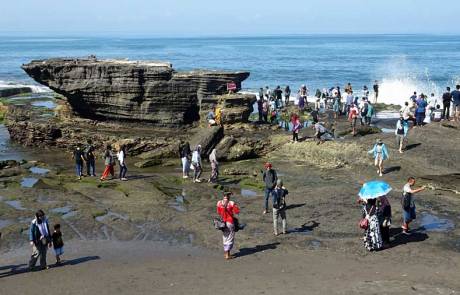 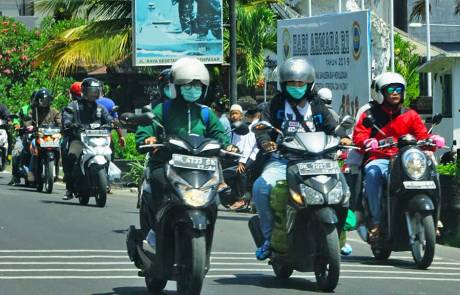 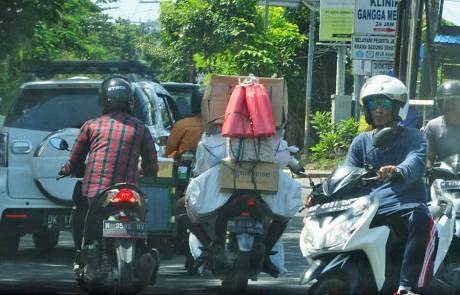 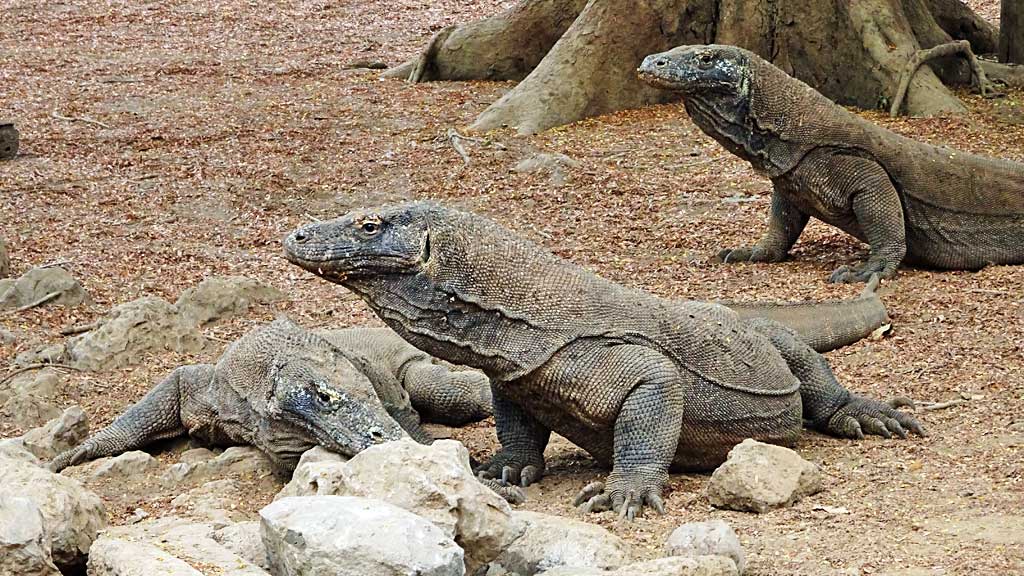