Repositioning to our Zanzibar Tour 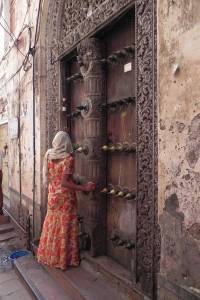 The respositioning from our Tarangire Safari to our Zanzibar Tour was uneventful.  We drove through Arusha, where the International Criminal Court for Rwanda is based.  The court is still holding trials for the 1994 genocides in Rwanda.  Sirens indicated vehicles rushing prisoners to jail after their trials. The flight from Kilimanjaro International Airport to Stone Town was smooth.  The weather was unbearably hot and humid in Stone Town, when we checked in to the Dhow Palace Hotel.

In the morning, we started our walking tour of Stone Town.  The streets are too narrow for cars, which makes them shaded, breezy and busy.  Older buildings have three types of doors.  The Arabs built the earliest doors, which were large enough to let elephants in.  The second door type added large spikes to prevent elephants from knocking down the doors.  The last type included an arch above the entrance, which was due to an Indian influence. 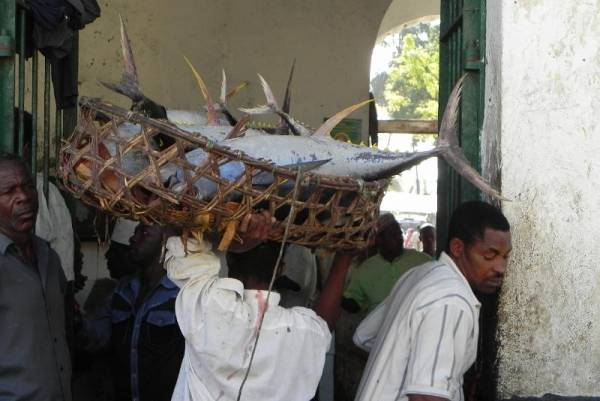 Next we visited the Stone Town Darajani Bazaar markets, which were quite an experience.  The markets are located next to the Former Slave Market Site and the Anglican Church.  There were separate areas for spices, meat and fish. We bought inexpensive spices and watched the early morning fish catch being unloaded.  A large group was participating in an auction for fish.  I walked through the meat market. Unrefrigerated meat is sold after public butchering. 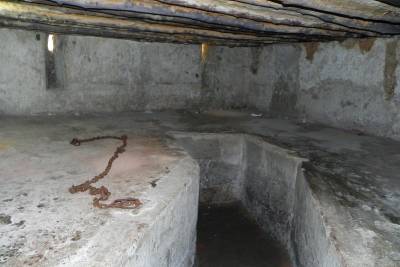 The last part of the tour was a visit to the former slave market site, which was sobering.  Slaves in the 1800s were jammed shoulder to shoulder in underground cells holding 40 to 50.  The bodies of those who couldn’t survive three days were discarded into the sea.  Then slaves were brought to the weeping tree, where they were whipped.  Those who didn’t weep brought a higher price.

Slavery was band in 1873 and the Anglican Cathedral Church of Christ was built on the site.  Ebony from the tree at the site has been fashioned into a cross to commemorate Dr. Livinstone.  The Sultan of Oman continued an underground slave trade until 1907, which marks the end of the slave trade.  Although Zanzibar is predominantly Muslim, Arabs are unpopular because of their association with the slave trade. 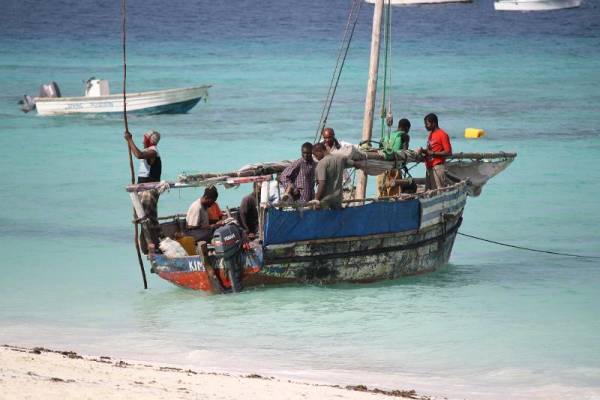 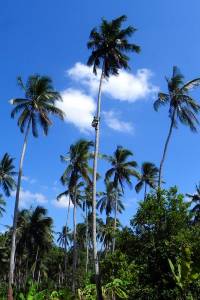 Our next Zanzibar Tour that day was to a spice farm, which was fairly interesting.  Your sense of smell can identify differences between cinnamon leaves, cinnamon bark and cinnamon roots.  Spice farms grow cloves, mangroves, nutmeg, henna and lipstick plants.  The most entertaining part of the visit was when a young man climbed a tall coconut tree.  He chanted on the way up and cut down several coconuts with a machete. On the way down, he sang the immensely popular Jambo Bwana song.

In the second phase of our Zanzibar Tour, we headed to the beachfront resorts of Nungwi.  We checked into the Smiles Beach Hotel. In the morning we walked along the beach, bought some shells, walked to the grocery store and spent some time at a local internet site.

In the late afternoon our Zanzibar Tour took a sunset cruise on a dhow, which was a great experience.  The mast of a dhow is heavy and short, so the craft is very stable. A long thin cross pole hoists the sail up the mast. When the dhow tacks, the sail moves around the front of the mast.  This prevents the sail from knocking people overboard.  Dhows cruise boats are wooden.  Even the rudder is wood.  The sunset was glorious – a thoroughly pleasant experience.

At 7 am one morning, we walked down the beach to the Nungwi fish auction.  I was very discreet with my picture taking, so that I didn’t offend anyone.  I took photos and videos from my waist, while making eye contact with the auctioneer.  The dhows were arriving in a steady flow with their catch from a night of fishing.  When they anchored near shore, fishermen immediately dragged the catch of sailfin, swordfish and tuna to the auction site. 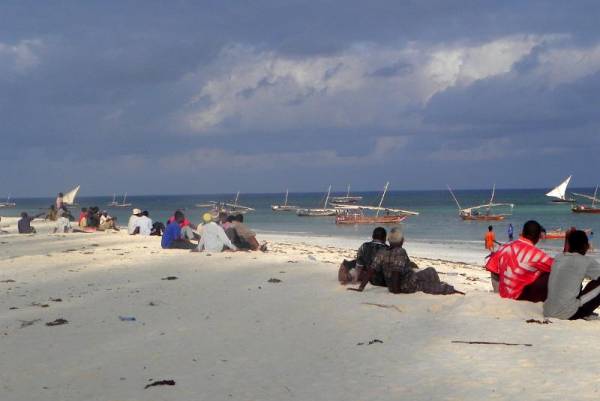 The auction began as soon as each fish arrived.  The atmosphere was mildly frantic, though we had heard that major arguments can break out. Fishermen done selling their catch sat on the crest of the beach sand, watching fellow fishermen arrive as the sun rose. 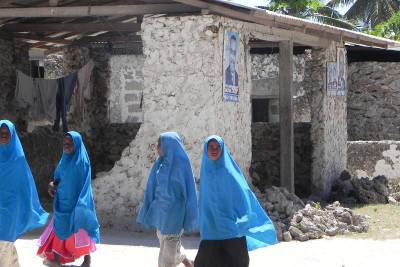 During the afternoon we walked inland from the beach front resorts into a totally different world.  The stone and brick buildings didn’t have doors or windows.  Some used wood, tin, thatch or screens to fill the openings. Inside darkness prevailed, as there was no electricity. People greeted us with “jambo”, but we were the only Caucasians around.  Drying smelt spread on the ground made a strong, unpleasant smell.  We became uneasy as we penetrated deeper and deeper into a maze of buildings that never changed.

After quite a while we made a turn back toward the beach and came out near the Double Tree Hilton.  Cold drinks in the breezy shade overlooking the sea were very refreshing.  The contrast between the hotel and the inland poverty stroll was humbling.

The Double Tree Hilton buffet dinner that evening was the best meal of our Tanzanian tour. Spices made each selection delicious. We had seafood soup, saffron rice, cilantro chicken, cured beef and vegetarian lasagna.  The desserts were great too. An enjoyable end to our time in Zanzibar.  For more about Zanzibar, check out our See Zanzibar page.

The next morning we had a long ride to the airport for our flight to Dar es Salaam.  Dar was an extremely clean city with vendors selling everything imaginable to vehicles stopped at traffic lights.  Vendors were even selling shoes to passing motorists.  After dinner in Dar we were off to the airport and a pleasant overnight KLM flight to Amsterdam.  Our African adventure was complete. 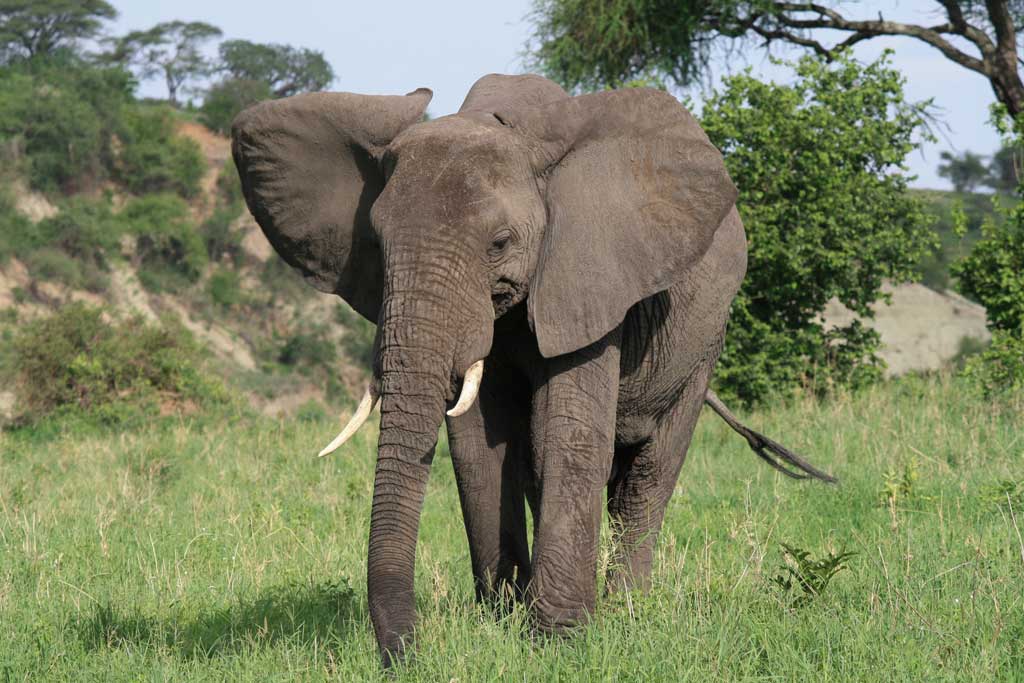 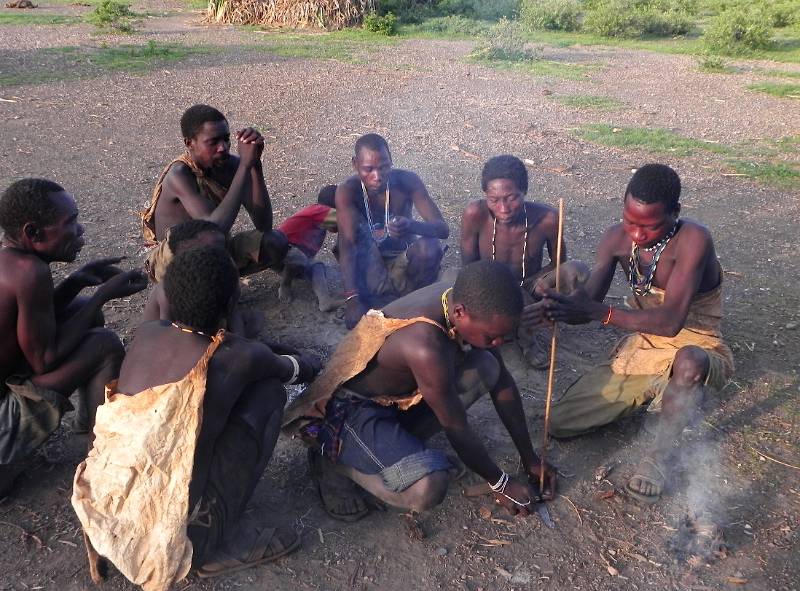 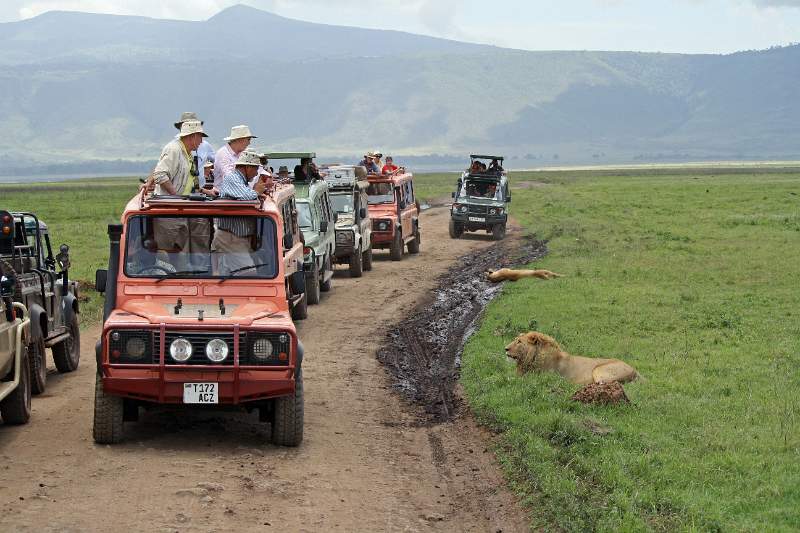