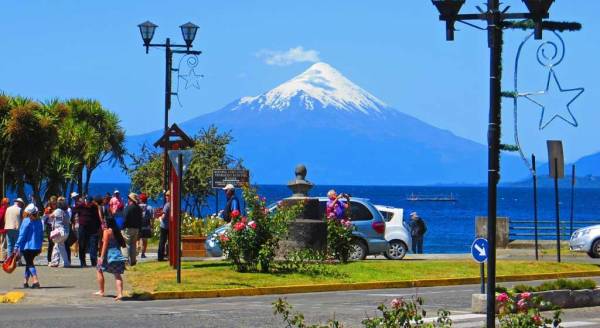 Finally a perfect weather day on our Oceania Marina Cruise.  Clouds along the coastline quickly burned off and revealed Osorno Volocano in all its grandeur against a cloudless blue sky.  Chabuco volcano and Tronador volcano we also clearly visible too. GV Tours (Gail and Vicki) operated our Puerto Montt Shore Excursion.  They ran a top notch service.  Our van was waiting outside the pier entrance, where we met our driver Carlos and our guide Camila.  Camila was an under graduate medical student who spoke perfect English.  She answered every question posed to her with excitement in her voice.

While we waited for the other two passengers to arrive we toured Angelmo port side market.  I bought a hand made wooden matte tea cup and metal sipping straw.  The owners were an elderly couple.  It was their first day in business and I was their first sale, so they were very excited. 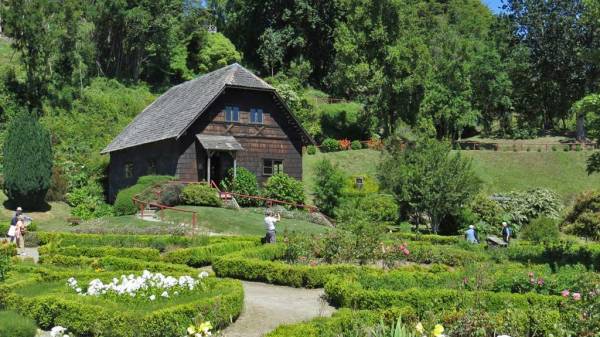 The tour started with a trip to the German village of Frutillar.  We stopped at the waterfront of Lake Llanquihue and strolled around the waterfront concert hall.  Then we drove past the gardens of the German museum.  Churches built from wood are common in the town.  Most of the churches in the area are Lutheran.

Next we drove to Ensenada where we stopped for the included lunch consisting of salad, potatoes, veggies and salmon.  A pisco sour and soft drinks were also provided.  The dessert was kuchen.  The restaurant had a lovely view of Osorno Volcano. 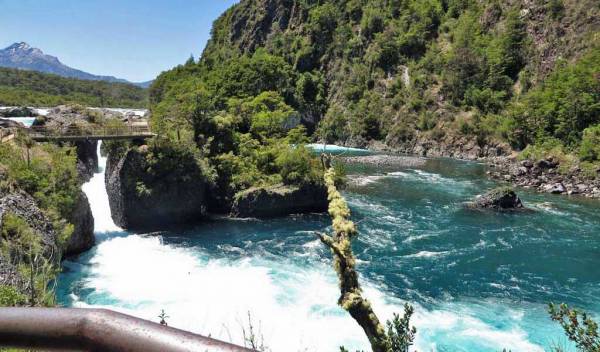 After lunch we drove to Petrohue Falls.  The falls are named after the Petro bugs.  They come out for about a month each year and they were out in force this day.  The Petros are about the size of a bumble bee.  The swarmed aggressively around heads and arms.  The Petros didn’t bite anyone, but our guide said the bite can be quite painful.

The walkways were under construction, so you couldn’t get to the best viewpoint where the volcano provides a backdrop to the falls.  After the falls, we stopped at the green lake, which was a non event except for the impressive swarm of Petros. 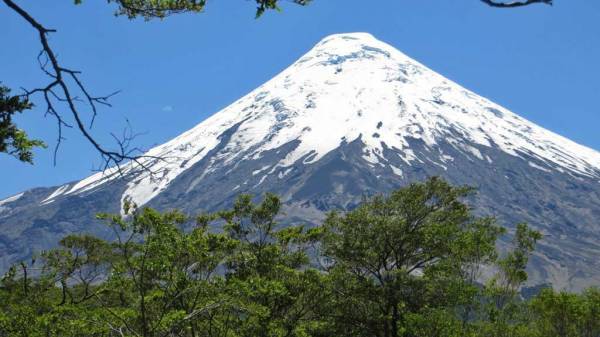 The last stop on the tour was Puerto Varas, which is also located on Lake Llanquihue.  Puerto Varas is known as the city of roses.  We strolled the waterfront with views of the volcanoes and admired the roses lining the streets and squares.  A light breeze and clear skies made for a perfect setting that signaled the end of our previously chilly Patagonian adventure.  The guide said we were very lucky with the beautiful weather, becaise Puerto Montt is famous for its heavy rainfall.

Next stop on the Oceania Marina itinerary, Valparaiso, Chile.