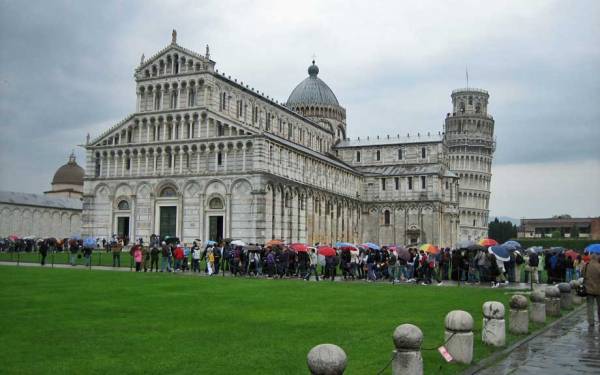 Our trip to Italy started with a flight in to Pisa, which was a great location to start from. Our experience in Pisa was wonderful, but our initial experience of finding our B&B was stressful.  After purchasing our inexpensive ticket for the 5 minute train ride from the airport to Pisa Centrale, we walked to our B&B, Gli Arlecchini.  My GPS couldn’t find B&B Gli Arlecchini and locals didn’t recognize the destination or street.  Finally we looked across the street and saw a number 14 with very small print underneath.  When I got a couple feet away you could read the name Gli Arlecchini.  The door was solid with no other advertising. 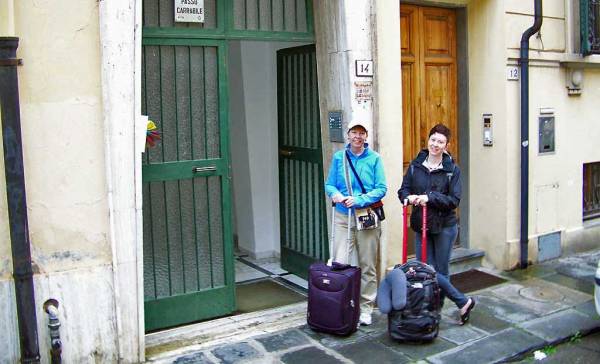 Pisa had a great thunderstorm in the night from about 4am to 6am including pouring rain.  In the morning this B&B provided a myriad of food and beverage choice.  This was reasonably priced accommodation for the more daring traveller, since the rooms had shared bathrooms and kitchens.  None of the other guests spoke English. 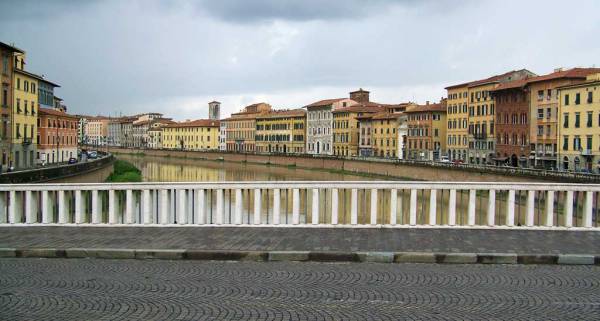 Pisa Self Guided Tour – Walk to the Campo dei Miracoli

Our host gave us directions for our walk to the Campo dei Miracoli, which is the piazza grounds containing the church and Leaning Tower. We went along the Corso Italia. The route was an extremely pleasant stroll along a pedestrian only avenue that also crossed the River Arno.  We felt like locals as we all ambled with purpose to our various destinations.  About half way along the 15 minute walk the rain started.  Although we got wet, this meant that the crowds at the Tower were non-existent.  Check out my Pisa self guided tour map from the train station to the Leaning Tower. 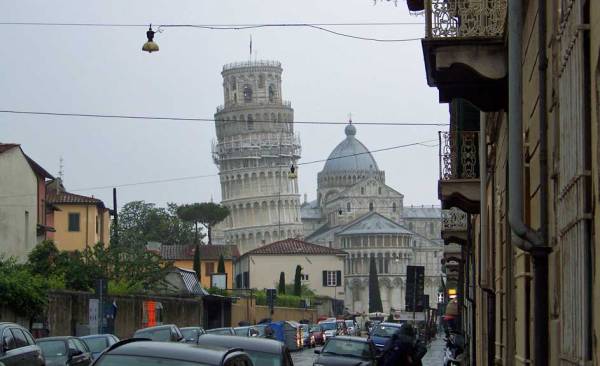 Pisa Self Guided Tour – the Baptistery

Our fist stop on our Pisa self guided tour was the San Giovanni Baptistry.  The baptistery is an amazing experience.  No one else, except an attendant, was in the baptistery when we arrived.  There was no admission.  The attendant came by and sang a complete harmonic echo song into the dome for us.  Very special.  I’m still blown away by it.

Next on our Pisa self guided tour, we visited the sculptures and crypts of the cemetery in the Campo Santo, which is a walled cemetery on the piazza grounds. This too was amazing, not only for the intricate carvings, but because again we were the only ones there. 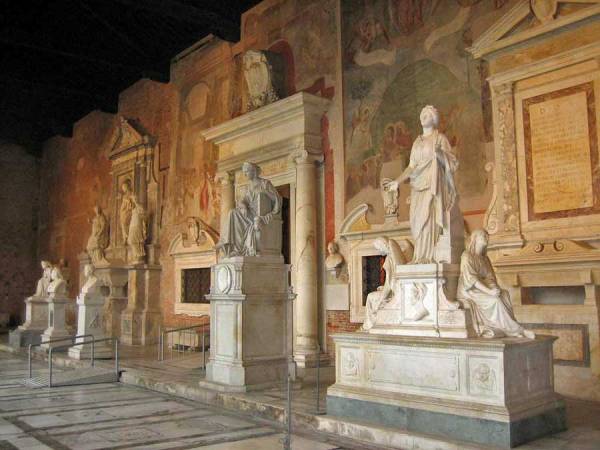 Next we went to our appointed 9am tour of the Leaning Tower.  There were only 8 of us who showed up in the rainy weather. The ascent is by a stairway within the exterior wall, so no problem for those with a fear of heights.  The continuously winding narrow stairway up was very disorienting.  When you walk on the side that leans out the most, you shift your feet toward the outside and your head leans toward the center of the tower. You feel like you are going to slide out through the narrow slits in the wall.  The marble steps are worn and dug out from all the pilgrims who have made the climb through the ages.  The walls are worn smooth by the hands that have reached out to maintain balance. 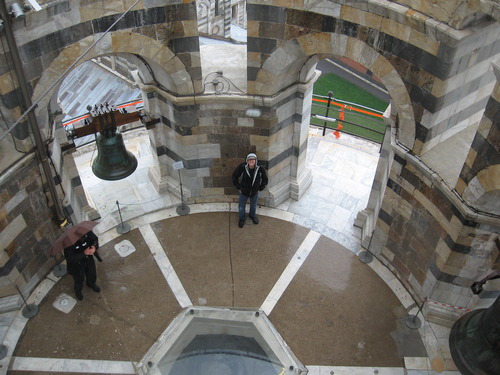 At the top, there is an open area of bells and then one final small ascent to the very top, which was too much for my vertigo.  The views extend over the Campo dei Miraoli piazza, the church, the baptistery, the town of Pisa and the country side. 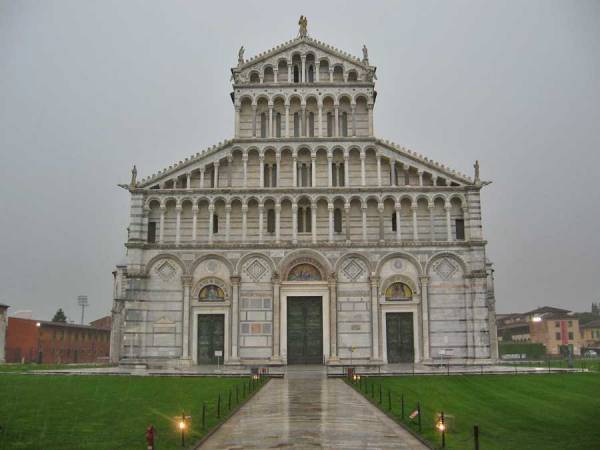 Pisa Self Guided Tour – the Cathedral

Our last visit on our self guided tour was to the Cathedral Santa Maria Assunta.  By the time the church opened, the rain let up and the tour buses had arrived.  The cathedral was full of large groups being led by different tour guides in a variety of languages.  The art on the walls is gigantic, but has a very dark wall paper appearance.  The structure and alcoves are gigantic and impressive.  I couldn’t help thinking how lucky we were up until then to have had the place to ourselves.

Our Pisa self guided tour was fantastic.  If you want to avoid the crowds at Pisa, get there well before 9am or try the late afternoon when the tour buses have departed back to their hotels. 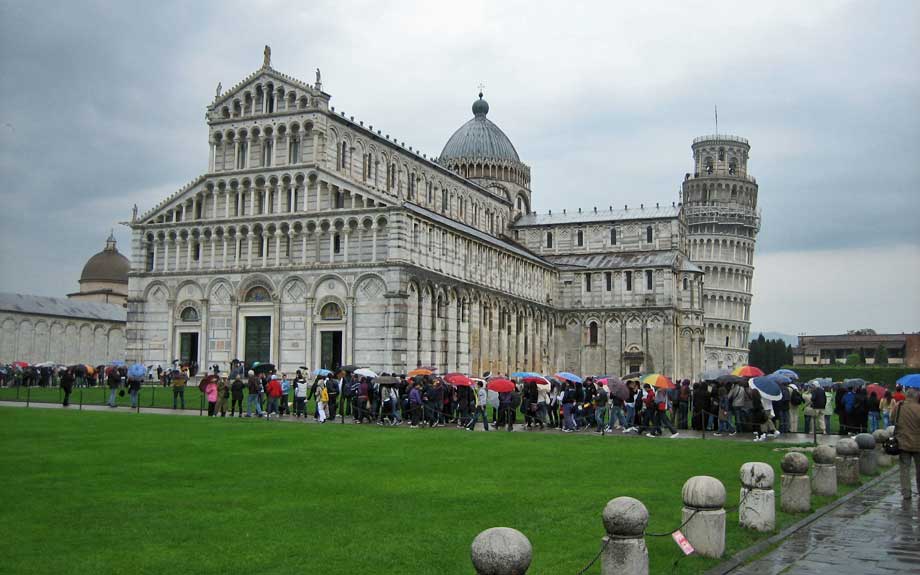 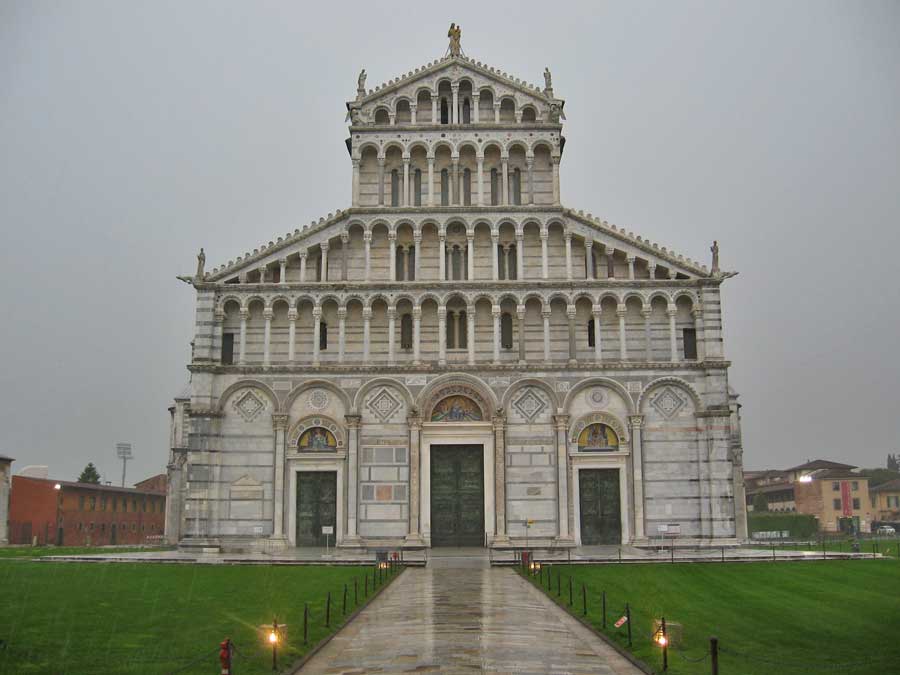 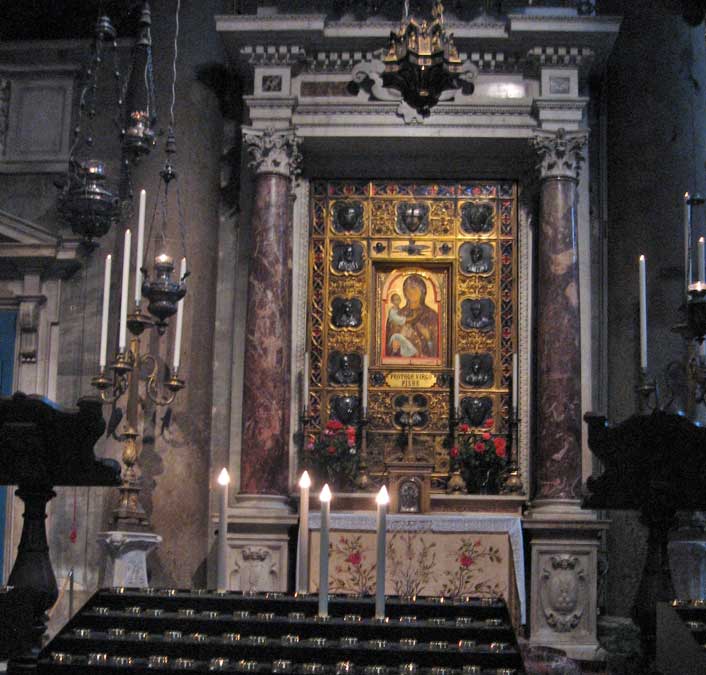 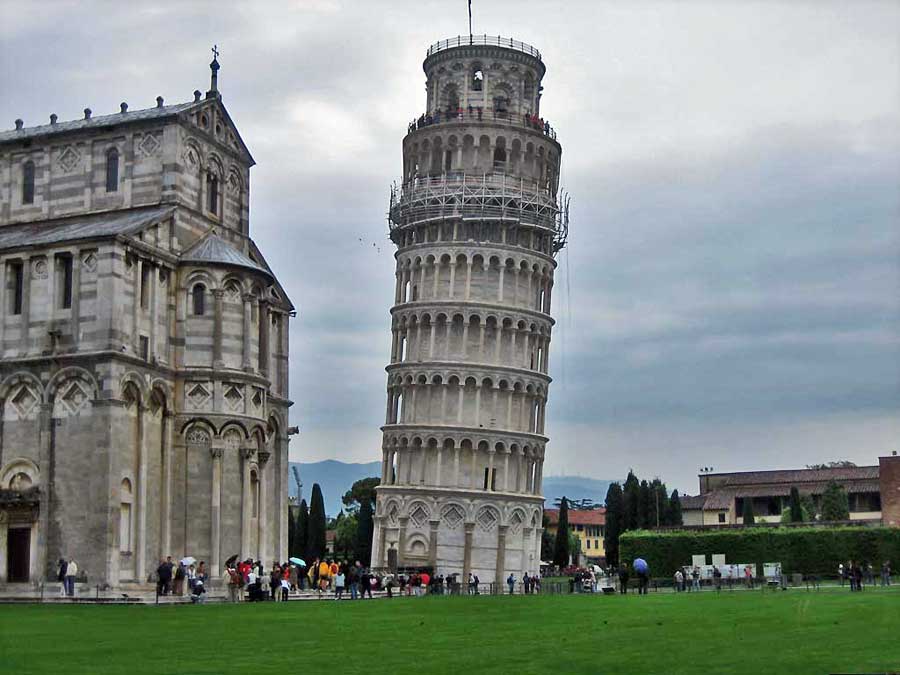 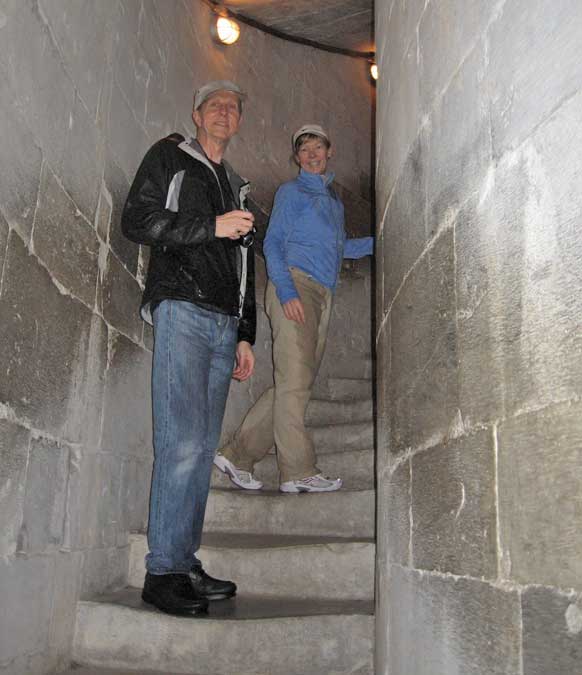 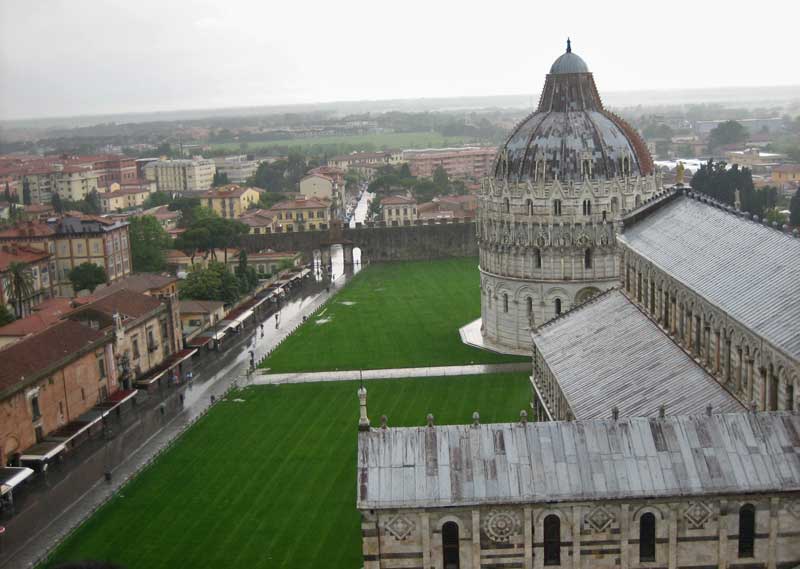 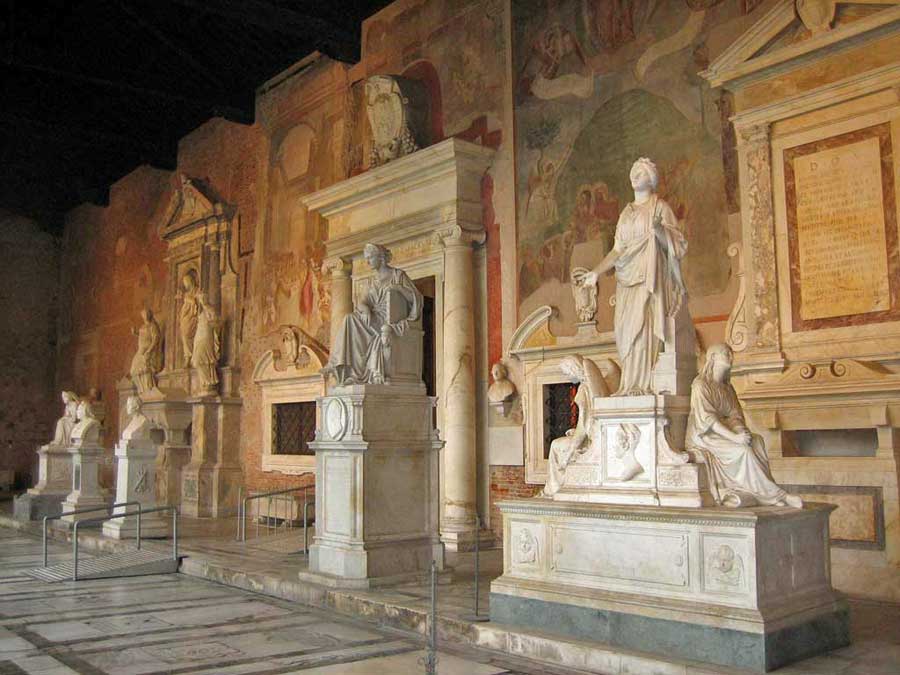 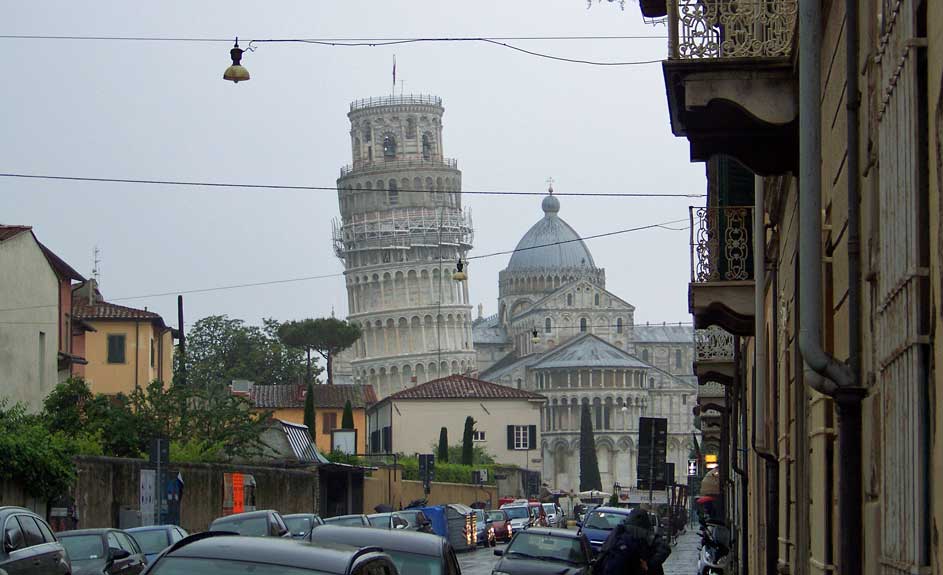 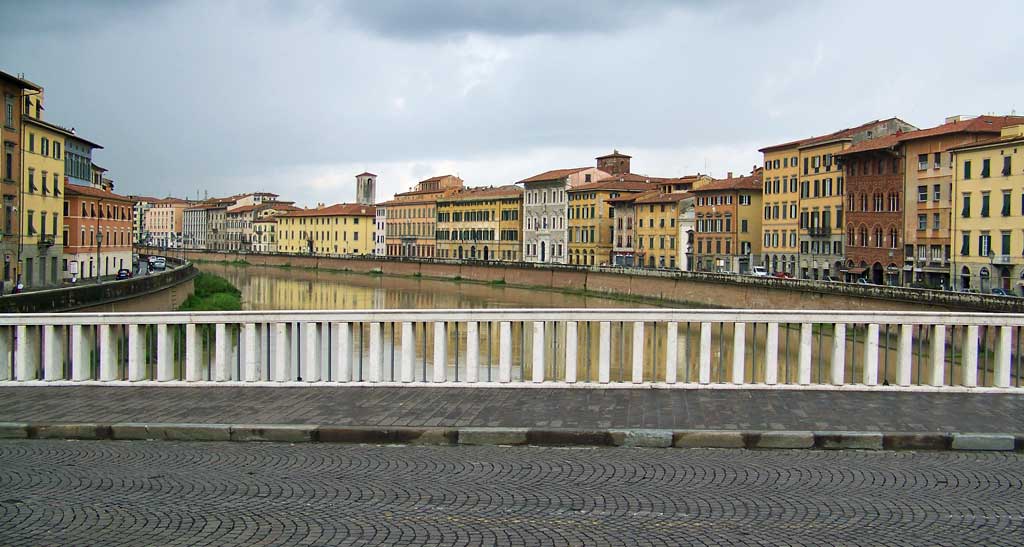 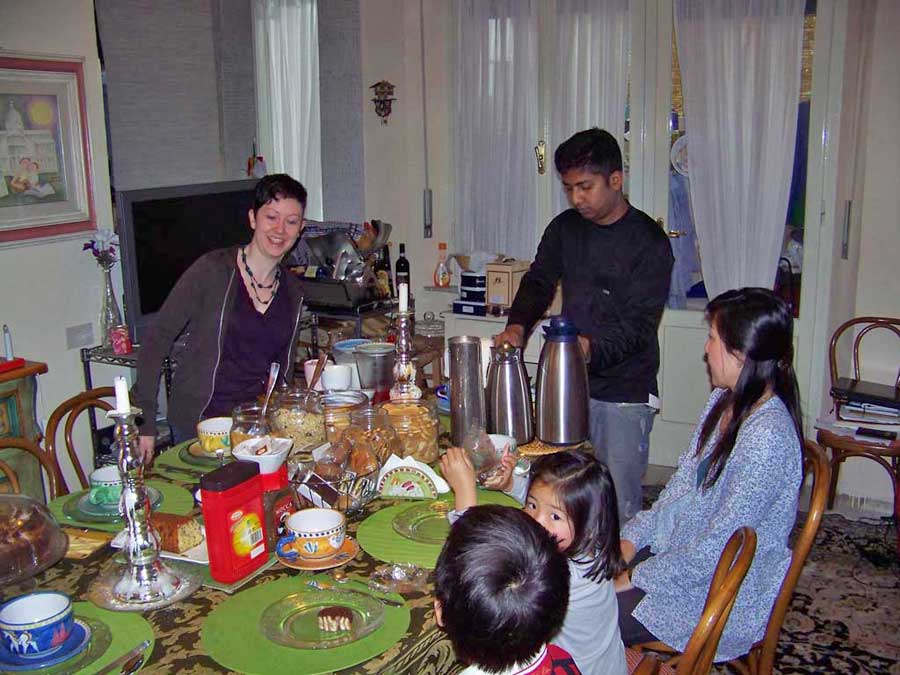 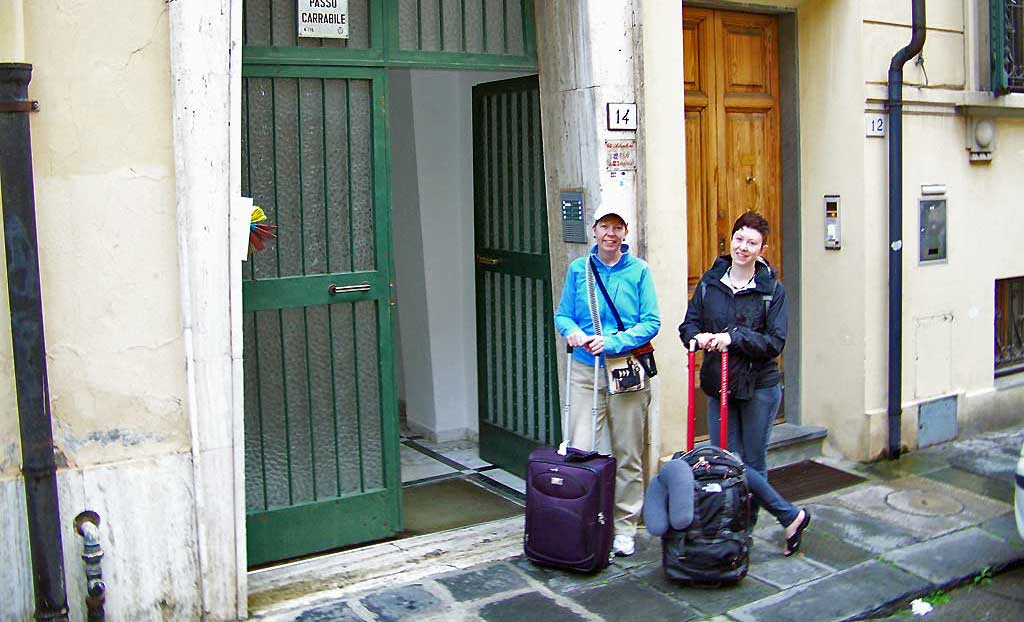