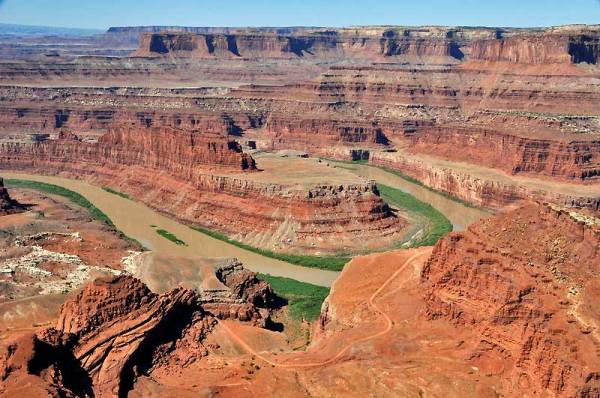 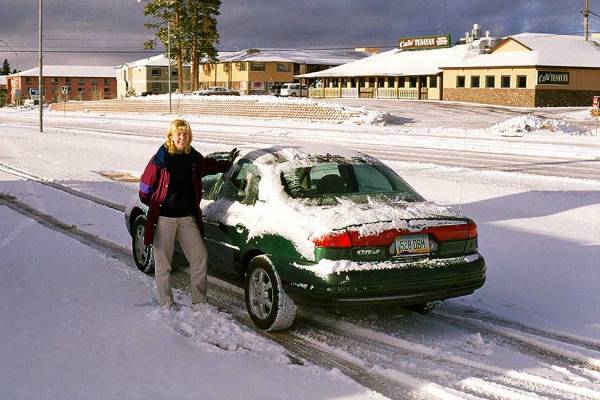 We reached the South Rim of Grand Canyon National Park in the late evening of our first day.  The South Rim weather was extremely cold.  We dashed from the car to the edge of each viewpoint on the South Rim.  Then we scurried quickly back to the warmth of the car.  In winter you can drive the full length of the paved areas along the canyon, while in summer much of the South Rim is restricted to park shuttle buses.  That night we stayed at the Holiday Inn Express in Tusayan, but Bright Angel Lodge in Grand Canyon Village would have been a better choice.

The next morning we were surprised by 2 inches of snow on the ground.  This made for some excellent pictures, so we revisited all the view points that morning.  Desert View Drive reminded me of the prairies, because of the drifting snow.  The car made deep ruts through the fresh snow pack.  I thoroughly enjoyed reliving the winter driving conditions of my youth, but I never expected this to happen in Arizona. 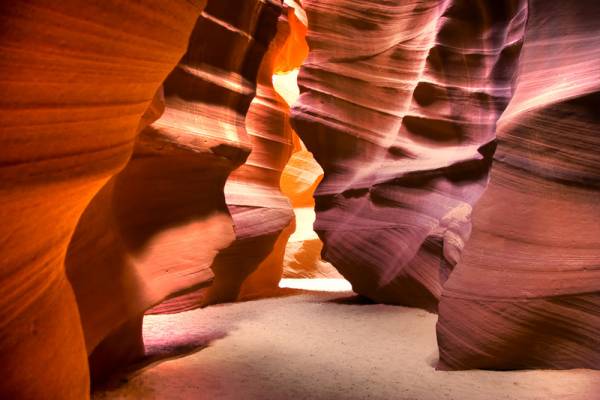 Navajo Nation Parks & Recreation controls the access to Antelope Canyon near Page, Arizona.  The Upper Canyon is called the Crack or in Navajo “the place where water runs through rocks”.  It has 120 foot walls and is a flat narrow walk.  The Lower Canyon is called the Corkscrew or in Navajo “the spiral rock arches”.  Lower Antelope Canyon has uneven terrain, so stairs and ladders are used.  Both have the same intricate patterns of sandstone.  Sunlight enters Antelope Canyon for brief periods during the day, which creates magnificent photos.

A guide is required to visit Antelope Canyon, which has an added benefit of helping to ensure safety from flash flooding.  There is a two hour time limit in each canyon.  Antelope Canyon is 3.5 hours from Grand Canyon Village and 2 hours from Monument Valley.  While in the area, consider visiting the Glen Canyon Da, which creates Lake Powell.  It’s about a 20 minute drive from Antelope Canyon.  From Lake Powell, take a 2 hour boat ride and then hike a one mile to see Rainbow Bridge National Monument. 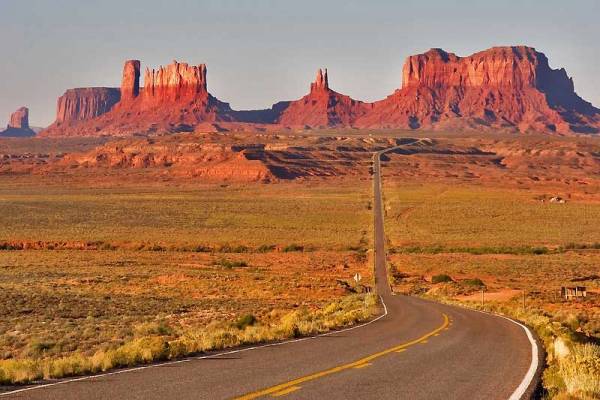 After leaving Grand Canyon South Rim, the road goes quite quickly down to lower elevations.  The fresh snow we had in Tusayan soon disappeared.  By the time we reached Monument Valley, the view and the weather were both great.  Monument Valley is a famous area location for a number movies, particularly westerns.  Navajo Nation Parks and Recreation controls access to Monument Valley.  After you can pay the entrance fee, you drive on dirt roads among the “monuments”.  These are large sections of stone that have not eroded with the surrounding plateau.  From Monument Valley our Grand Canyon Area Tour headed north to Arches National Park in Utah.  Along the way we ran through a couple localized snow storms. 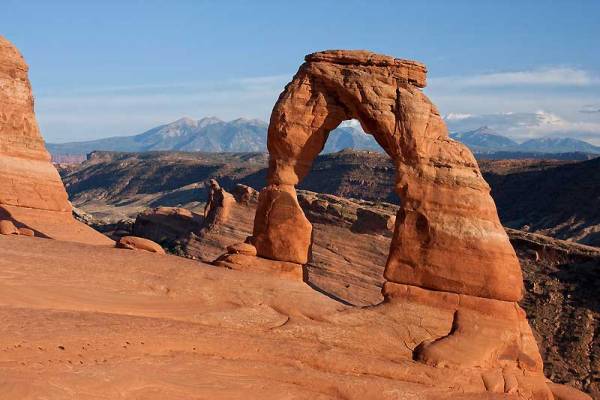 We stayed in Moab for the Arches National Park visit on our Grand Canyon Area Tour.  We were up at dawn to begin our tour of Arches.  The weather was very cold, but the rock formations were intriguing.  Arches National Park has all kinds of strange hoodoos and erosion patterns that create numerous arches.  The best known features are the Delicate Arch and the Balanced Rock.  The park was fabulous, but I’d prefer to have visited when the temperature was more bearable.  While you are there, travel another half hour one-way to visit Dead Horse Point State Park, where the Colorado River does a spectacular tight 180 degree horseshoe shaped reversal in direction. 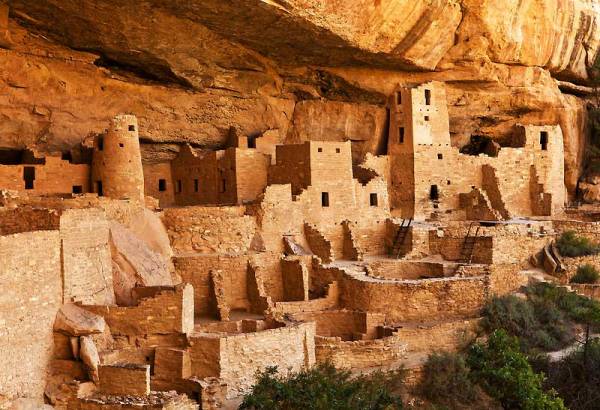 From Arches National Park, our Grand Canyon Area Tour next visited Mesa Verde National Park nearby in Colorado.  Mesa Verde sits on a plateau from 6,000 to 8,500 feet, so we were in for more freezing cold February weather.  The road side had piles of snow.  The road to Mesa Verde is quite steep with some great views of the valley below.  Mesa Verde is an archaeological Pueblo cliff dwelling site that was occupied about a thousand years ago.  Thousands of tourists can visit Mesa Verde each day, but in the snowy weather there were only a handful of visitors.

The major cliff dwelling ruin is a short walk from the center, but it’s not the only ruin in Mesa Verde National Park.  As you drive around the park you can catch glimpses of numerous other cliff dwellings carved into steep cliff edges.  The dwelling locations seem totally inaccessible.  Apparently the early Pueblo cliff dwellers climbed up the cliffs to grow crops.  That night we stayed in Gallup, New Mexico. 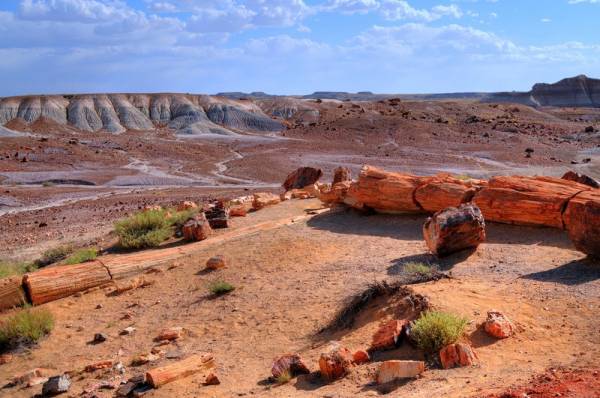 The last stop on our Grand Canyon Area Tour was the  Petrified Forest National Park, which is easy to get to from Interstate 40.  The weather in this area was balmy compared to the snowy adventures farther north.  The calm weather made this visit extremely pleasant.  Petrified Forest National Park has an immense number of trees that were petrified 225 million years ago.  The trees became petrified in swamp land.  Then soil covered the petrified trees and now erosion is exposing the petrified stone tree trunks.  The colors in the stone and the number of petrified forest tree trunks were amazing.  The park service controls access into and out of the Petrified Forest in the hopes of reducing the number of petrified stone souvenirs that tourists try to sneak out of the park. 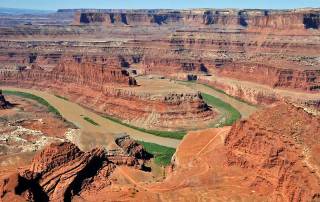 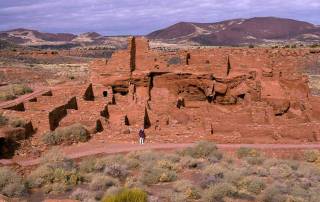 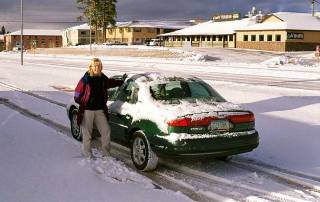 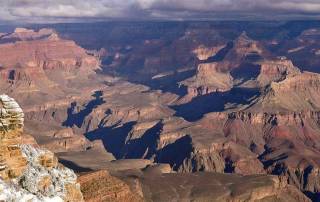 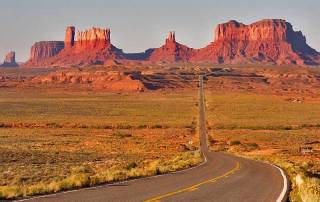 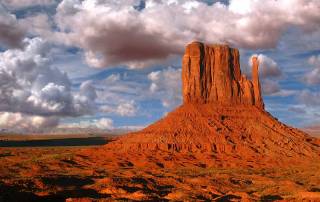 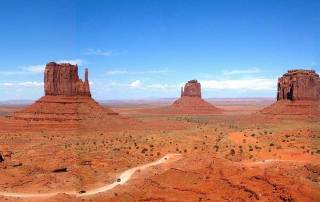 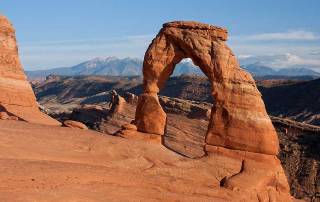 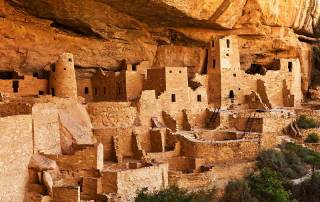 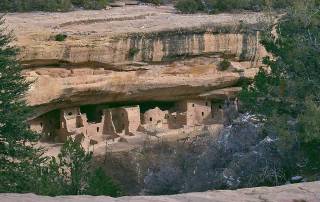 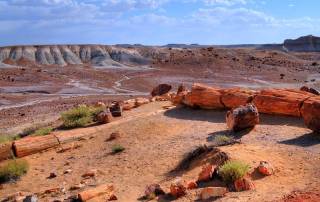 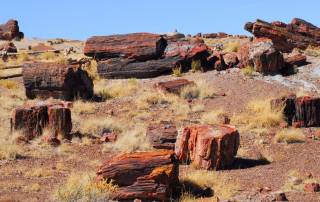