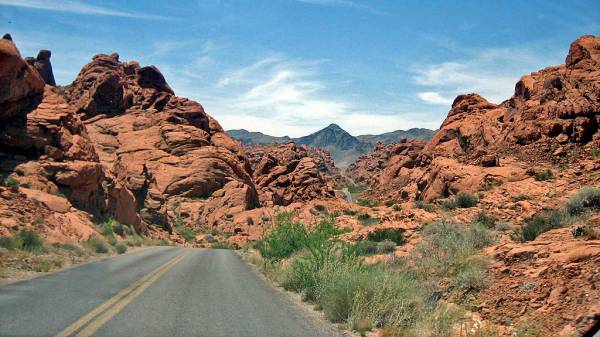 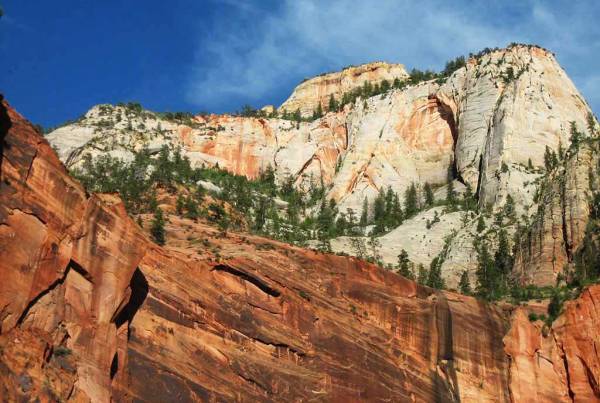 At Zion National Park,  we spent the night in a cabin in the park.  This was a great because it placed us in the center of the park.  Past the lodge only park trams can be used.  You must leave your vehicle behind.  I had been to Zion 35 years earlier and it seemed much the same – people talking quietly under the shady trees in the valley surrounded by steep cliffs.  We hiked across the river and up onto the cliff side.  The trail led under a waterfall and through a tight narrow 90 degree turn on the pathway.  We also hiked up the Virgin River until the trail ran out in the river water.  As long as there isn’t a flash flood risk, you can hike up the river when the level is low. 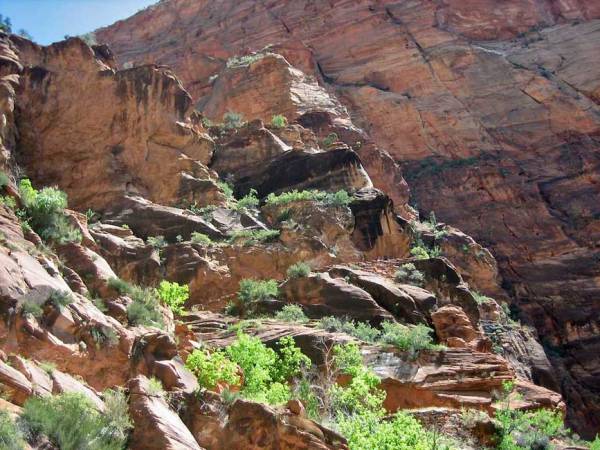 On the second day we hiked up to about the same spot on Walter’s Wiggles where my family turned back when I was a child.  This time my fear of heights prevented me from going any further too.  I recalled that the switchbacks were dust trails when I was a kid, but now they are paved.  I also remember how scared I was that my sister might fall off the path.  When my mother decided we should turn back, I was relieved.  Hiking all the way up to the top of one of the mountains at Zion would be amazing, but the height is just too much for me.  Plus there are lots of places to hike in Zion National Park without scaring yourself. 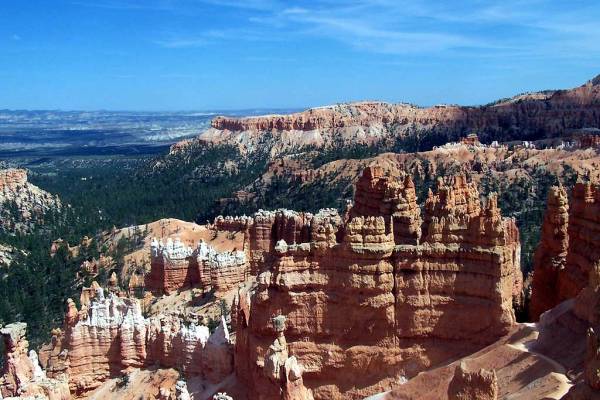 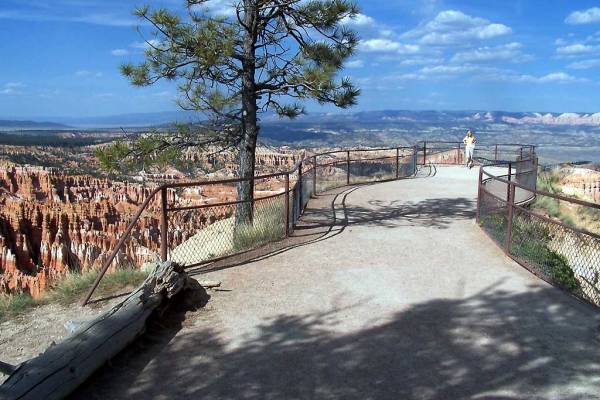 I didn’t enjoy the Lodge at Bryce Canyon.  The staff weren’t friendly.  At 3:30 pm they had no rooms ready, no lunch service, no dinner service.  The rooms were ordinary and faced the pine forest.  The good thing about the lodge is that it’s only a few steps from Sunset Point on the Rim Trail.  From Sunset Point we walked along the Rim Trail to Inspiration Point.  You can keep going all the way to Bryce Point in about an hour.  You can also drive to the parking lots at Inspiration Point and Bryce Point.  We noticed that the short incline up to the viewing platform at Inspiration Point made us short of breath due to the altitude. 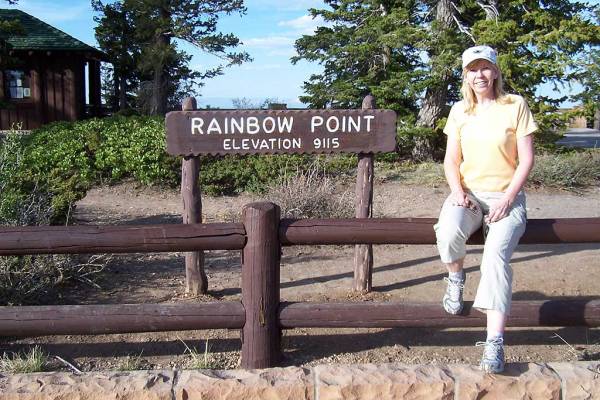 We discovered Ruby’s Inn in the town of Bryce near the park entrance.  Ruby’s Inn is definitely a better option for a Bryce Canyon Trip.  Ruby’s Inn was very popular and had great food.  Tourists were there on their own Bryce Canyon Trip from all over the world.  Menus were posted in German, French and Chinese.  The smorgasbord was available for breakfast, lunch or dinner. 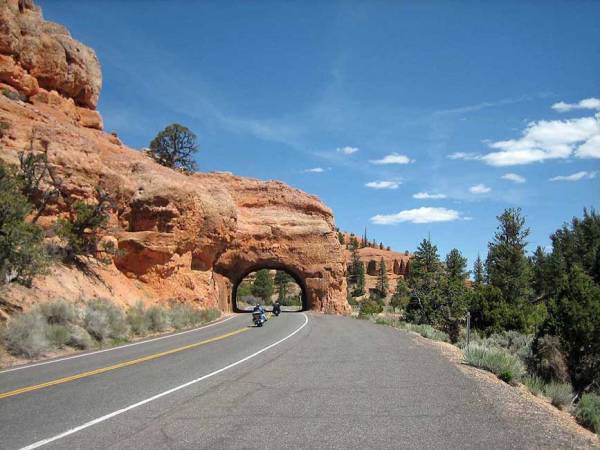 The next morning we drove back to Red Canyon.  We enjoyed Red Canyon more than Bryce Canyon National Park.   Red Canyon had way fewer tourists and a pleasant variety of trails that weren’t too steep.  A couple we met there  convinced us to give Bryce Canyon another chance.  They said that the walking down into Bryce Canyon was even better than Red Canyon and not difficult hiking.  So, we returned to Bryce Canyon.  At Sunrise Point, near the Lodge at Bryce Canyon, we walked down the Queens Garden Trail.  I’m so glad we returned for this hike.

Later that day we drove over a 9,900 foot pass on the way back to Las Vegas.  The pass had lots of snow.  Temperatures at the peak were 59 F.  Two hours later we were back on the valley floor with temperatures of 104 F in Las Vegas. 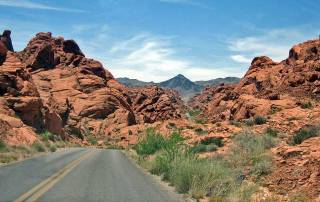 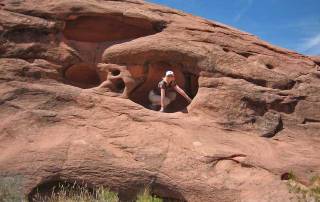 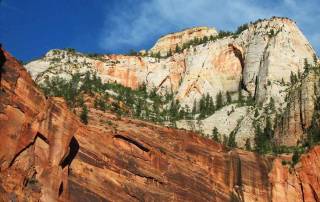 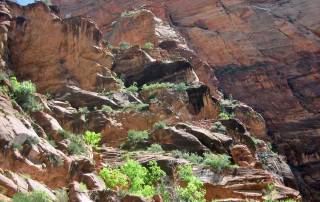 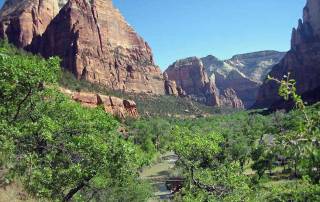 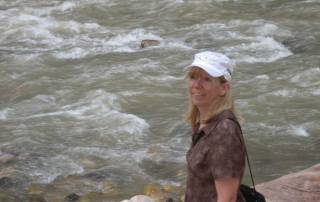 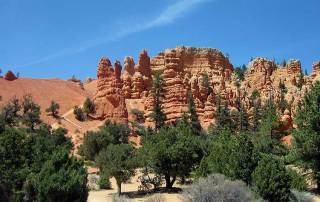 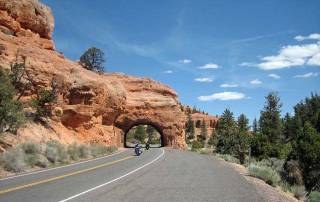 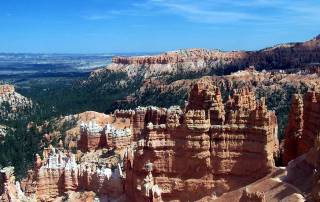 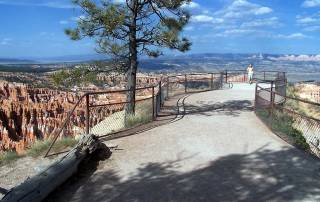 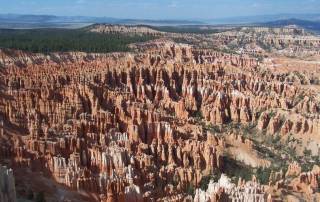 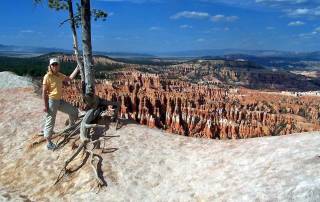 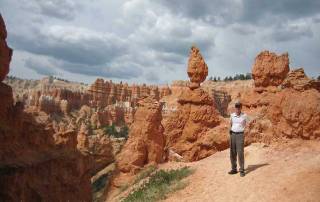 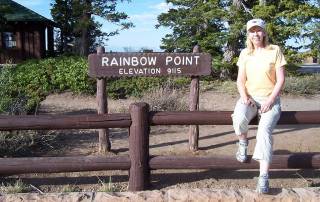 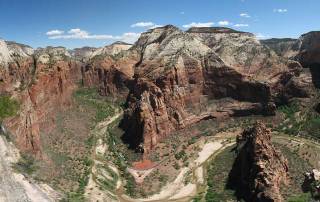