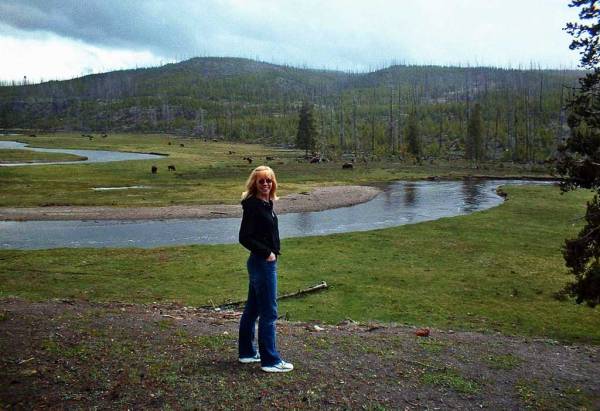 Yellowstone Visit – Get There

In late May we decided to make a Yellowstone Visit.  There’s really only one way most people get there – by car.  We rented a Mustang in Seattle and drove two days across the northern US to West Yellowstone.  Hotel rates are much cheaper outside Yellowstone National Park, so we stayed in the town of West Yellowstone.   By the time we arrived, the Yellowstone weather had turned to winter.  We huddled by the heater in our hotel the first night.  The next morning we headed out to tour the park. 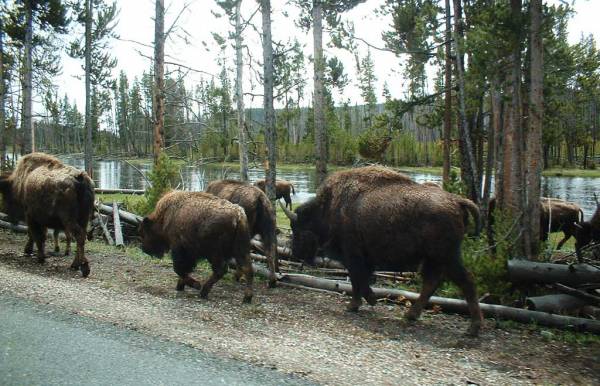 The first stop on our Yellowstone visit was at Madison Junction.  We spent several minutes looking out over the river meadow.  Bison were grazing along the tree line.  This spot is a great view.  There are no fences to keep the bison in the park.  It’s reassuring to know that the millions of bison that once roamed the plains still have one remaining place to roam free.  As we continued our drive, a large traffic jam stopped our progress.  A herd of bison was walking along the river bank and several bison choose to walk on the highway instead.  Bison won’t ever move off the road for a car. 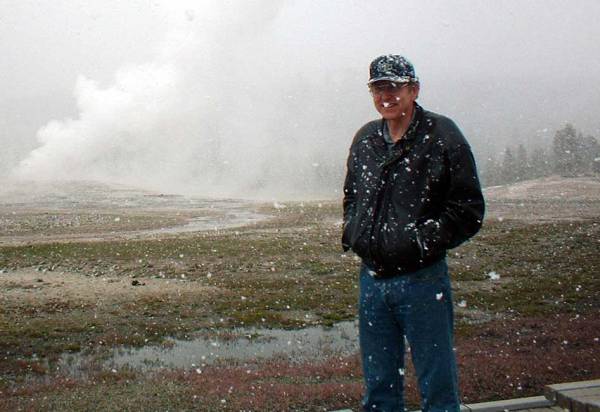 The next Yellowstone visit stop was the Old Faithful Geyser.  Light snow from a thick overcast made it hard to see.  We waited almost half an hour at the Old Faithful Geyser, including quick escapes inside the Old Faithful Lodge to warm up.  We were watching intently when a sudden burst of snowflakes totally blocked our view.  Naturally that’s when Old Faithful erupted.  I didn’t see a thing, even though we were only a few yards from the geyser.  We had to wait another half hour for the next eruption.  The second time around I could barely make out the difference between the steam from Old Faithful and the falling snow.  When you visit the Old Faithful Geyser, don’t forget to spend a few minutes to walk through the Upper Geyser Basin and down to the Morning Glory Pool.  You can hike this area in a couple hours. 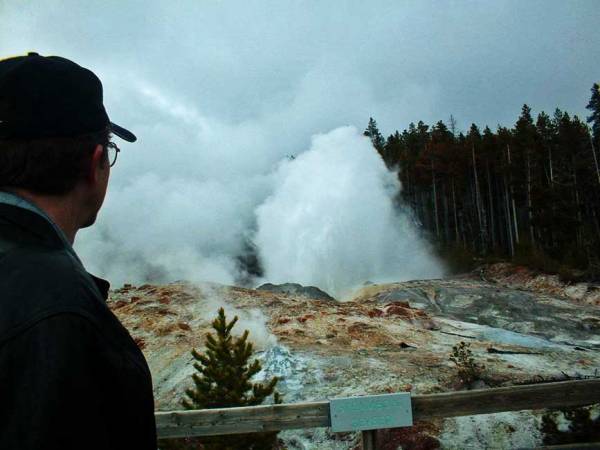 On our second day, we set out from our hotel in West Yellowstone for the Norris Geyser Basin.  The Steamboat Geyser was going crazy just as we arrived, which was lucky because no one ever knows for sure when it will erupt.  The Steamboat Geyser doesn’t shoot as high as Old Faithful, but it seems to make more noise and last longer. 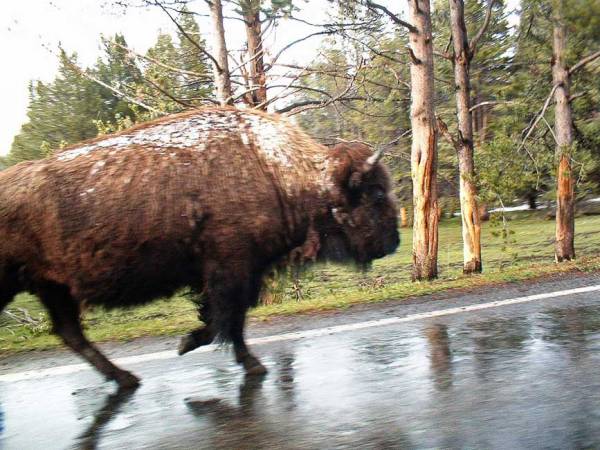 Bison along Side, Sharing the Road

After the Norris Geyser Basin stop, snow started to fall quite heavily.  We decided not to try to reach Mammoth Hot Springs as I was worried we might end up trapped there in the snow.  As we drove, we came across a bison walking down the highway head on into oncoming traffic.  I pulled along side in my lane.  I was so nervous that I ended up taking a blurry pic out the car window as I drove by at the same speed as the bison was walking.  Snow was stuck on the bison’s back.  I was intimidated by the bison’s size, but it paid no attention whatsoever to me or the car. 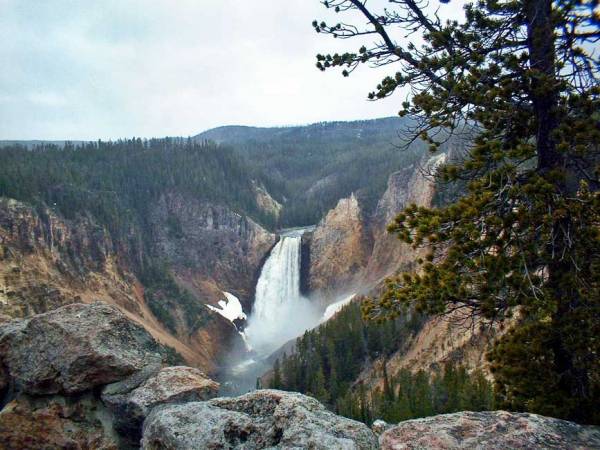 The next stop on our Yellowstone visit found us at the Grand Canyon of the Yellowstone.  We wandered the trails on the North Rim to Lookout Point for a view of the Lower Falls and to Grand View for a look at the canyon.  The weather was very overcast, but the snow had stopped.  There’s so much to see in this small area, including Inspiration Point, the Upper Falls, Uncle Tom’s Trail and the Artist Point. 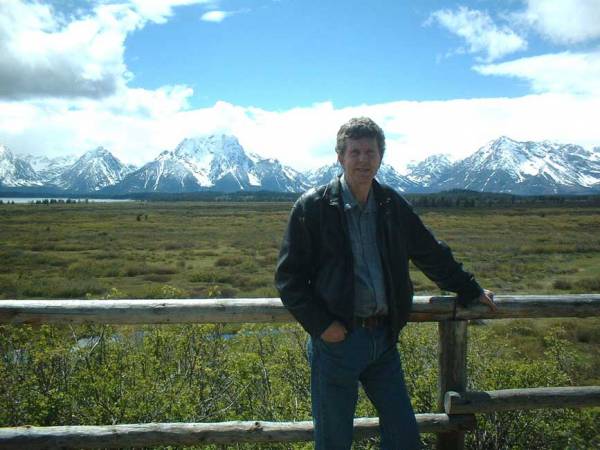 We finished the second day of our Yellowstone visit at the Yellowstone Lake Hotel.  Yellowstone Lake is surprising large and has few hills around it, which makes it seem a little desolate.  We enjoyed dinner at the hotel that night.  In the morning it was so nice to wake up in Yellowstone National Park instead of commuting from a hotel outside the park border.  We decided to take a short hike from the hotel, but signs warned us not to do so.  An angry bear was in the area.  Instead we headed to the West Thumb Geyser Basin for the last stop on our Yellowstone Circle Tour.  There were some beautiful hot pools here and the board walks let you get uncomfortably close to the scalding hot water.

From the West Thumb Geyser Basin we drove south out of the park for just under two hours to reach the Jackson Lake Lodge overlooking the Grand Teton Range. 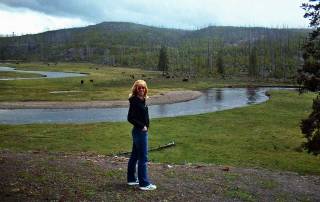 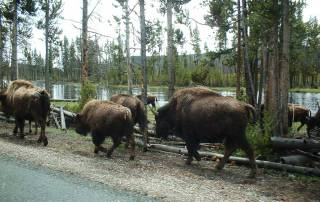 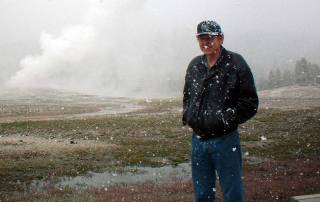 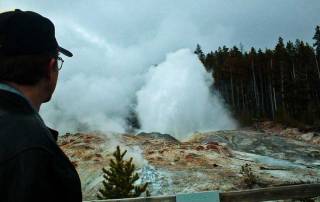 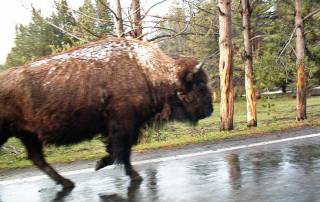 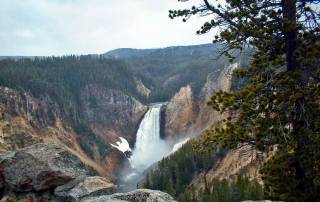 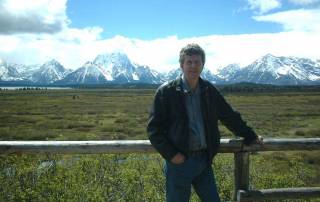 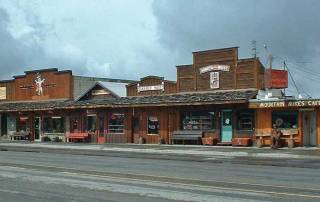