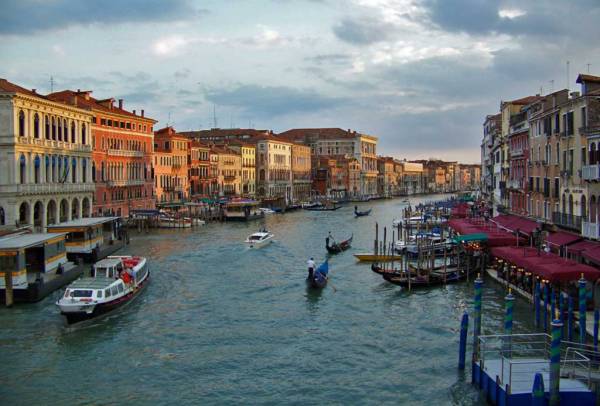 Early in the morning, we started our Venice Self Guided Tour at the train station in Venice Mestre.  The Venice Mestre station is the last stop before you cross the rail bridge to the islands of Venice.  In order to buy a cafe latte and a pastry at the train station, we had to pay a cashier first and then show our voucher to another employee who gets what you’ve paid for.  We then headed out to check the schedule and debated which of the numerous trains we would catch to Venezia S.L (Venice).  We bought the cash only ticket from the vending machine and discovered you didn’t have to commit to a specific time.  As I dropped the 1 Euro coin in for each ticket, a train arrived on the track beside us.  We were in Venice in a few minutes and were feeling like seasoned travelers. 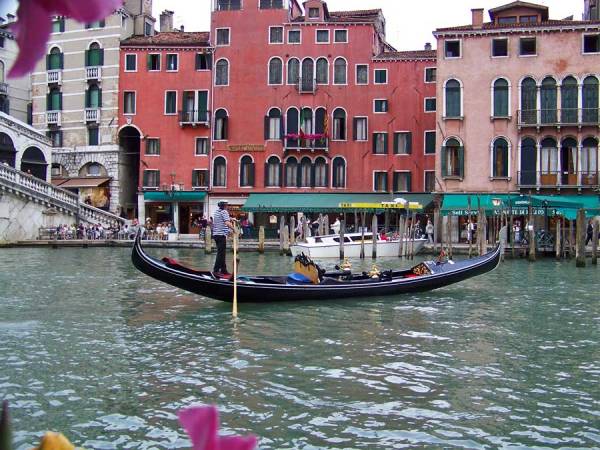 From the train station in Venice we carried and rolled our bags to search for Locanda Gaffaro.  After crossing the first foot bridge from the train station, I was quickly lost.  Even with understandable Italian directions from locals, our hotel remained elusive.  Finally I was stumped, but a pleasant gentleman walked up and called us by name, which was shocking.   Our search for Locanda Gaffaro was over.  This man explained that he recognizes his customers by the clicking of the luggage wheels on the pavement bricks.  We stored the luggage and headed out to see the city. 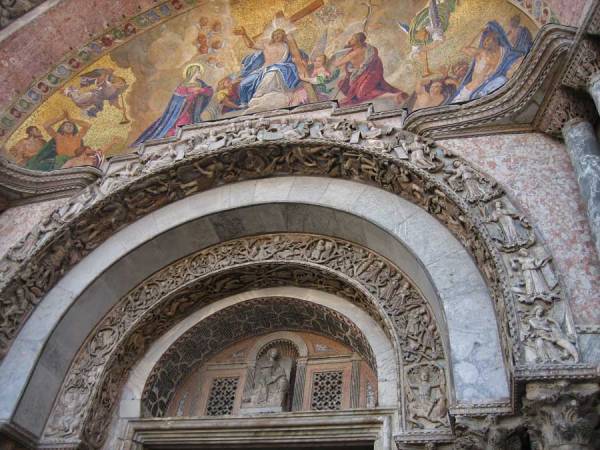 I never really fully understood that the city of Venice has no cars in it, just a tangled maze of pathways, canals and foot bridges .  Signs continually marked the way through the twisted maze of pathways to the Rialto Bridge and the Piazza San Marco (St Mark’s).  If you are going back to your B&B, it’s much harder to find your way.  Walking the maze ofpathways you continually come to places where there is no bridge across the canal you want to pass.  Walking inland, you frequently come upon dead end court yards.  It reminded me of a video game gone bad.  A map didn’t help, as we couldn’t find where we were on it most of the time.  Just go with the flow.  You can’t get lost.  It’s an island. 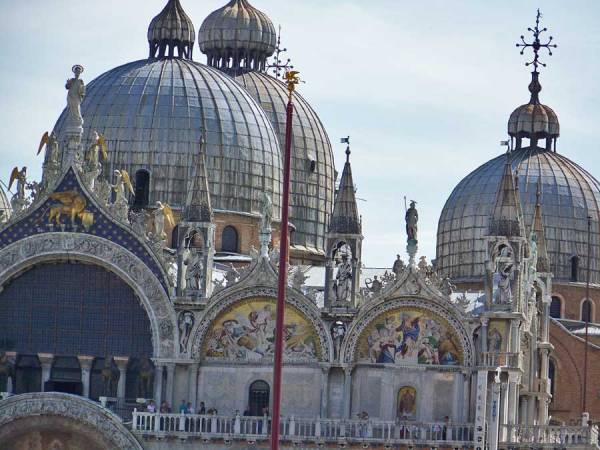 After crossing the Rialto Bridge, we eventually made it to St Mark’s on the Piazza San Marco.  The square at St Mark’s was full of people even though it wasn’t the busy season.  The Basilica had a long line up and we joined in for the free visit.  The line moved fairly quickly and we were in within a half hour.  Inside St Mark’s Basilica was a bit unusual.  The interior was very dark and covered in large mosaics.  The mood in St Mark’s was a gloomy with a faded atmosphere that was endearing.

I paid the small charge to see the gold altar and extra charge to go up to the second floor.  The small museum on the second floor of St Marks had views down into the church and an outside balcony.  The museum had the original 4 horses, which are duplicated on the outside of St Mark’s. It also had old books, mosaics and tapestries. 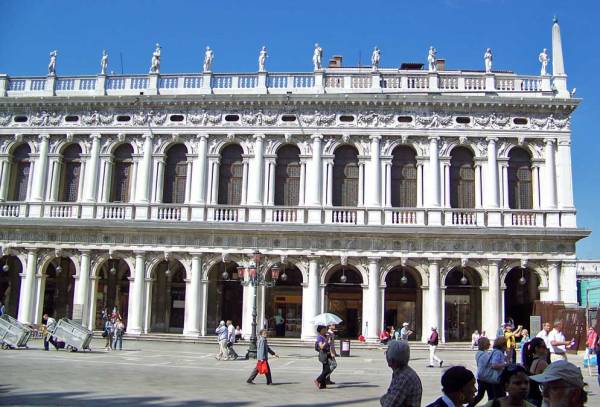 Next we went to the Palazzo Ducale, known in English as the Doge’s Palace.  For the price, it’s a questionable visit.  The Doge’s Palace had large rooms with ornate ceilings, dark oversized paintings and extensive dungeons.  The most interesting part for me was the large collection of armor and weapons, including cross bows of every size and early revolvers.  There was even armor for horses and children.

We stopped for lunch in the square. I had the most delicious Genovese sandwich of ham and soft white cheese, tomatoes and lettuce on a bun that was so soft it almost tasted doughy.  In the heat, the cola was wonderful too. We sat on a stone ledge in the shade and fed pigeons while we ate.  I didn’t realize at the time that the price was twice as much if you buy in St Mark’s square. 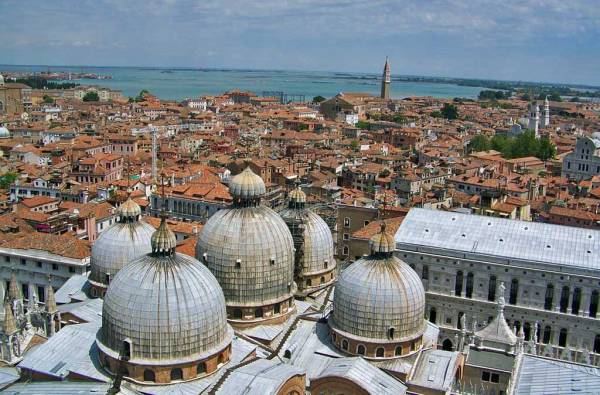 Feeling revived, we decided to ascend the Campanile Tower next.  The $8 Euro charge seemed excessive for a venture that looked to involve a climb of 200 – 250 steps.  To our pleasure, the charge was for the elevator ride.  The views at the top of the Campanile Tower were an amazing 360 degree views of the city.  The cool sea breeze was blowing through the campanile creating a perfect recovery from the excessive warmth of the square below.

From there, I led us on a disaster trying to find a vaporetto to cross the Grand Canal, but it turns out my failure to find one was related to the fact that I was actually looking for a traghetto.  A vaporetto is a water taxi, while a traghetto is a gondola that crosses a canal for a fee.  I got so lost again, that we had to follow signs back to the train station and then retrace our steps back to the Locanda Gaffaro B&B.  We were worn out, sun stroked and blistered.  Not my best effort at a self guided tour that early afternoon. 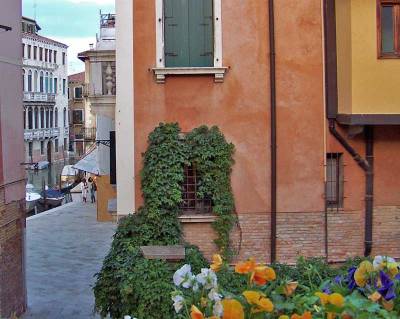 Our room at Locanda Gaffaro was wonderful.   The room was large and quiet with air conditioning and a full bath.  The balcony had a slight view in to a canal.  The tile floors were pleasantly cool on our feet.  I sat on the balcony and listened to the animated Italian conversations as unseen individuals prepared dinner in their apartments.  Nighthawks screeched overhead.  A gondolier was singing.  Thunder rolled and a light mist of rain fell.  Locanda Gaffaro was enchanting. 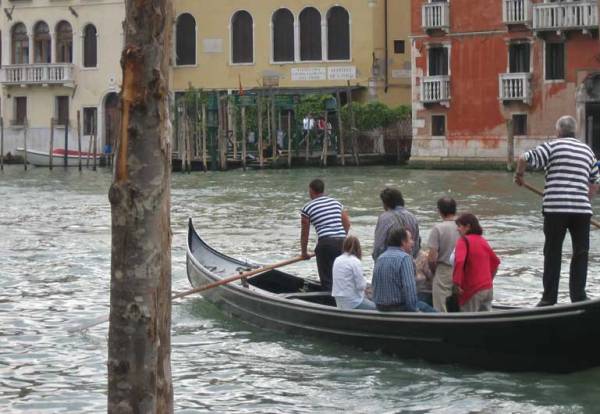 After a few enchanting hours recovering at Locanda Gaffaro, we were ready to try Venice again.  First I planned a route to the nearest traghetto and this time we succeeded.  There were traghetto passengers waiting and the price of 50 cents was posted.  We were both in shock with what happened next.  You board the gondola, but there are no seats.  You shuffle to form two rows of standing passengers as the gondola rocks side to side.  All those canoeing safety instructions flashed in my mind.  The elderly woman in front of me exuded confidence.  Off we went in the Traghetto across the Grand Canal with everyone standing.  What blast! 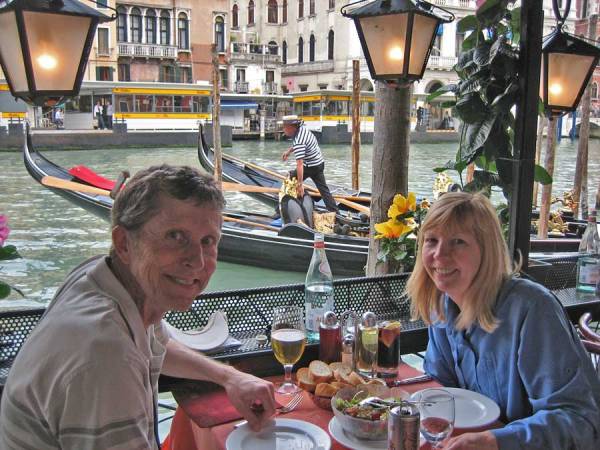 Next we wandered over the Rialto and found a waterfront table coming free for dinner on the Grand Canal at Ristorante Terrazza Sommariva.  Dinner on the Grand Canal turned out to be a highlight of Venice.  The waiter took our picture in one direction with the Rialto in the background and another with the gondolas for a background.  He told us photography was his second occupation.  I had a draft beer and we shared an insalda mixta.

For the main course, I had spaghetti al fruiti de la mare, which is seafood pasta.  When I asked for parmesan cheese on the pasta, the waiter told me it was a mistake but obliged me.  He put a little parmesan on one small area just to show that he wouldn’t deny a customer the right to be stupid.  He was right.  This was the best spaghetti I’ve ever had – without parmesan.  Lovely shrimp, scallops and tasty clams in the shell.

Afterward dinner on the Grand Canal we walked a few steps from the Ristorante Terrazza Sommariva to the Rialto Bridge.  From the bridge we watched the world as if frozen in time.  An amazing conclusion to our stay in Venice, though we did get lost again on the way home and had to retrace our steps from the train station again. 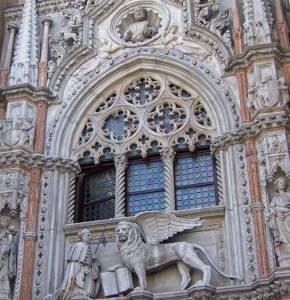 In the morning we were at the station early to head from Venice to Florence.  We knew the routine for buying cafe latte now – pay one person for a voucher and then collect drinks from someone else.  There were no announcements to board our train.  We boarded and it left with no announcements whatsoever.  With assigned seating, a free beverage and a snack, it seemed more like a plane ride to Florence than a train trip.  Meanwhile one of the passengers in front of us had forgotten to self stamp his ticket at the train station.  A Gestapo impersonator charged him $65 payable on the spot.  Always an adventure on Italian trains. 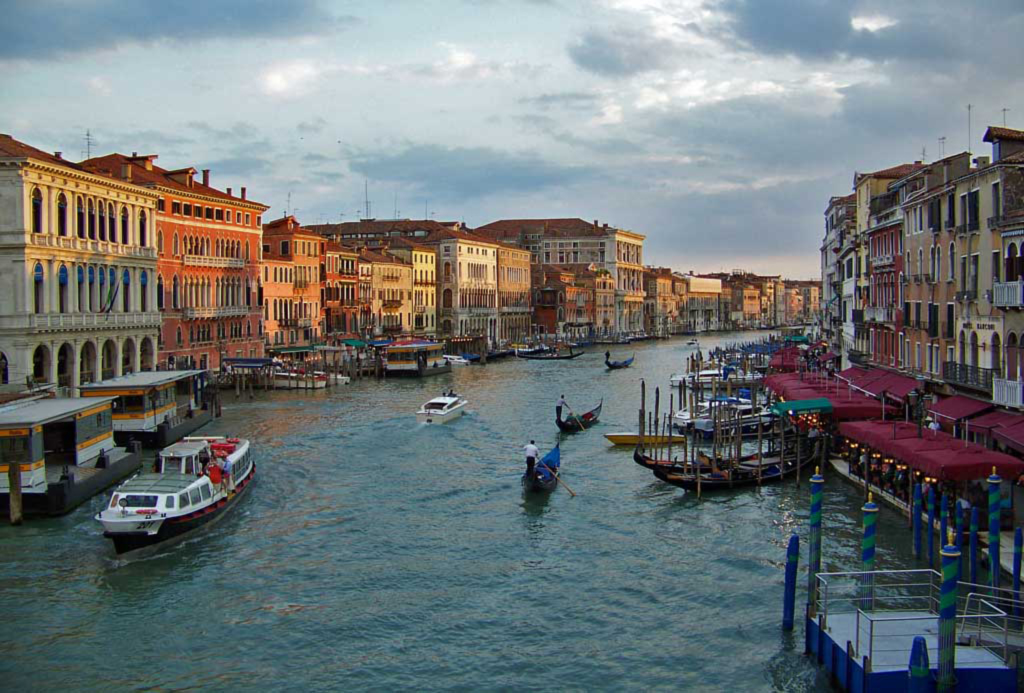 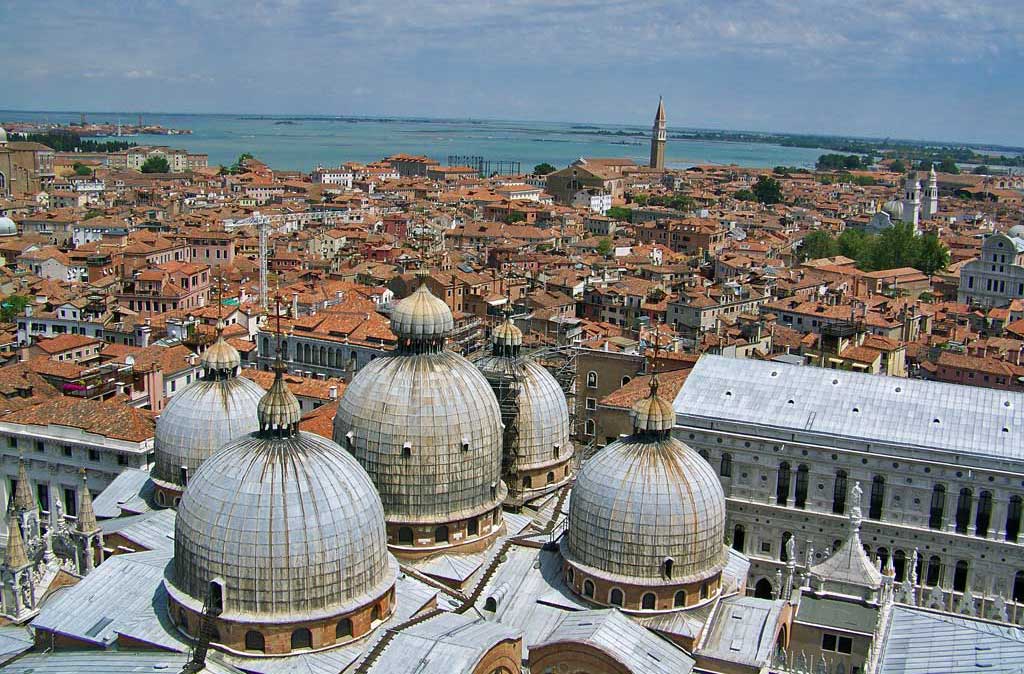 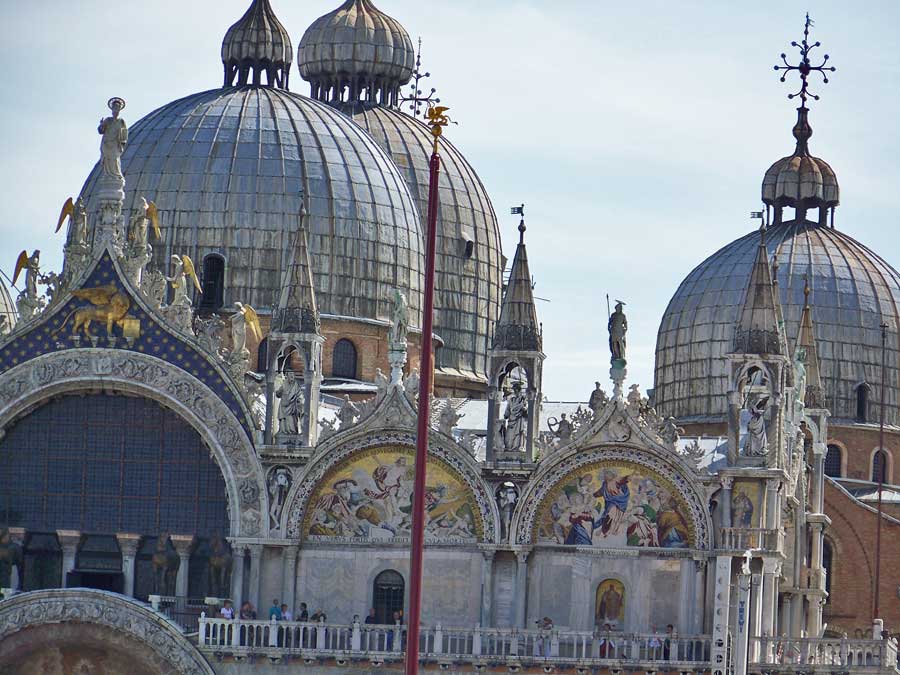 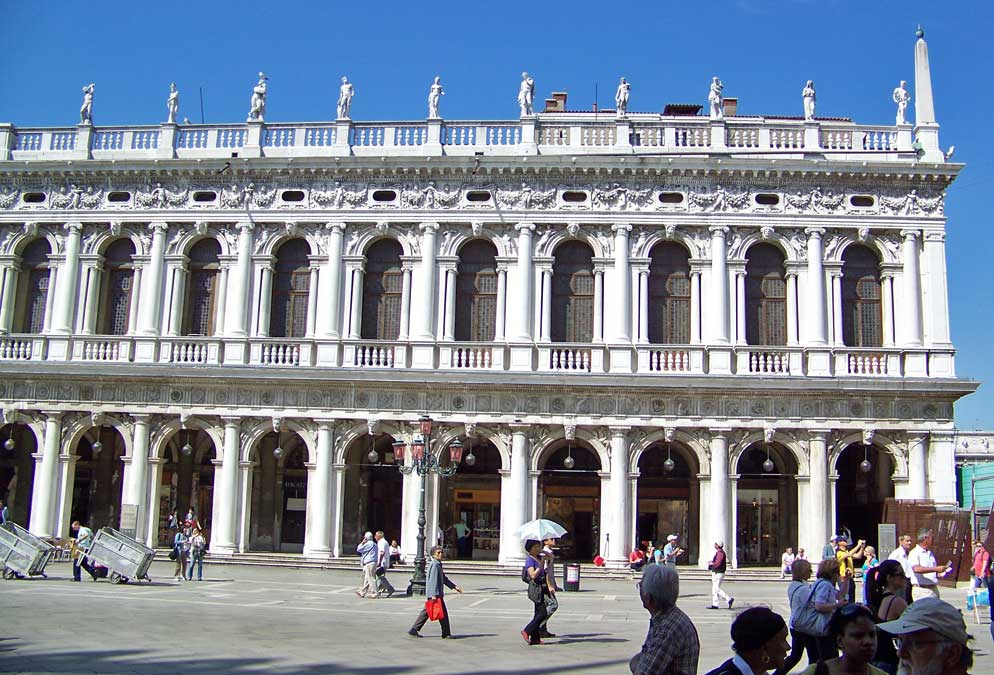 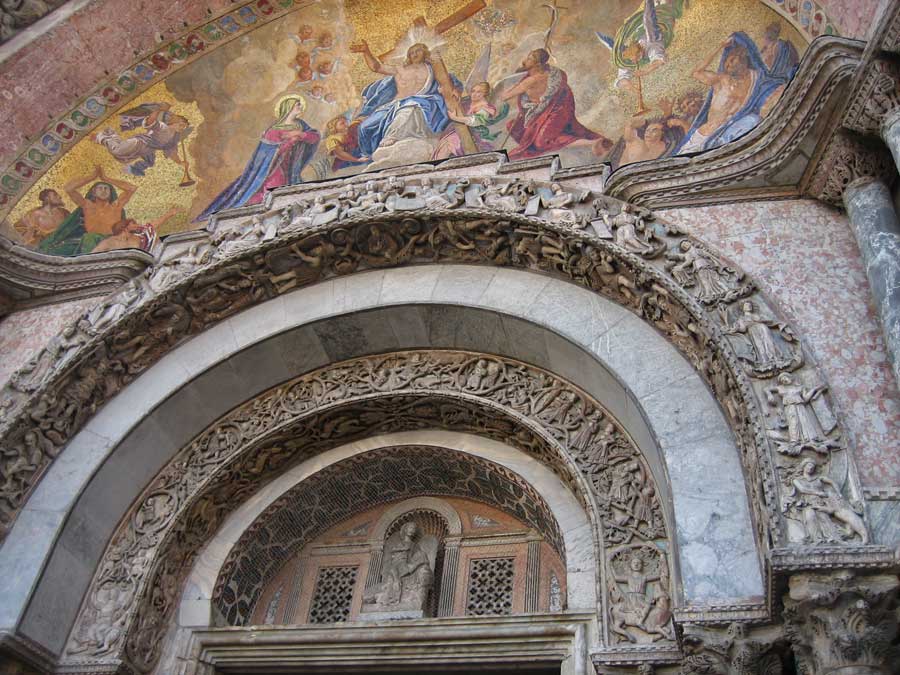 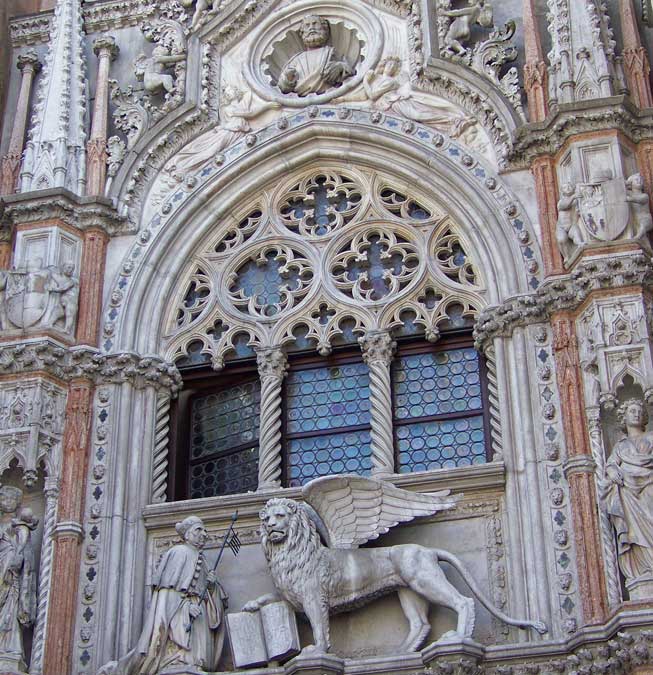 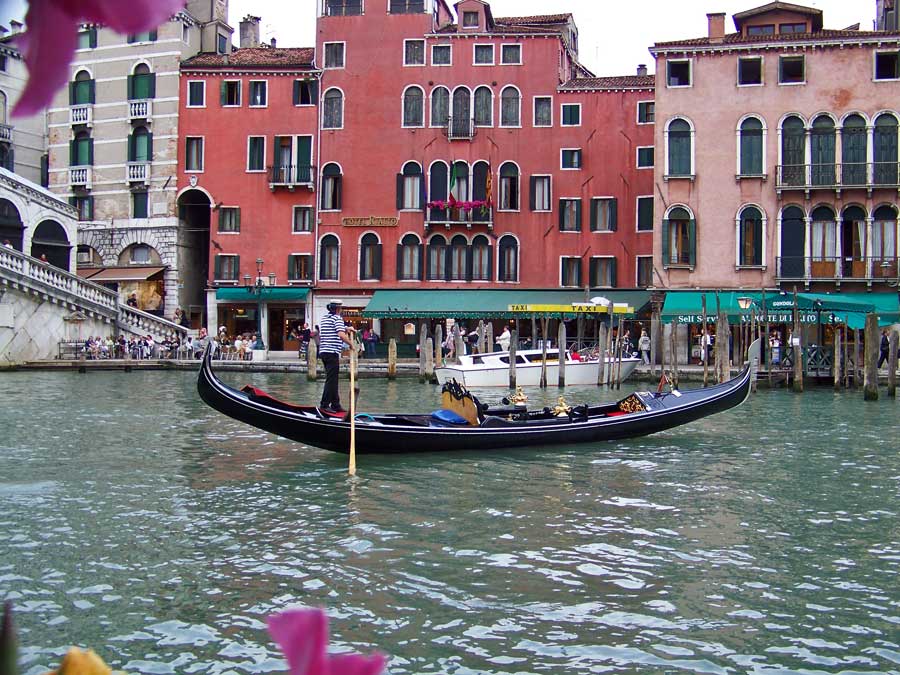 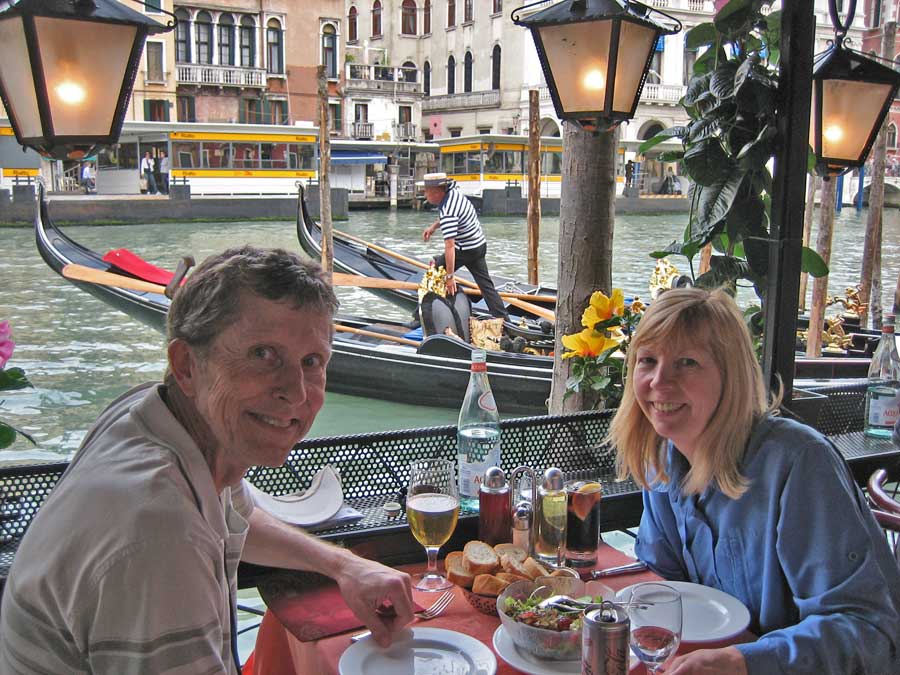 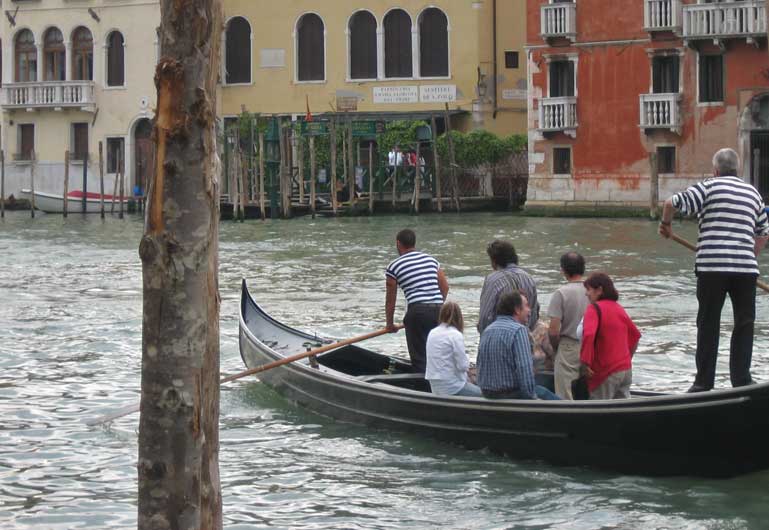 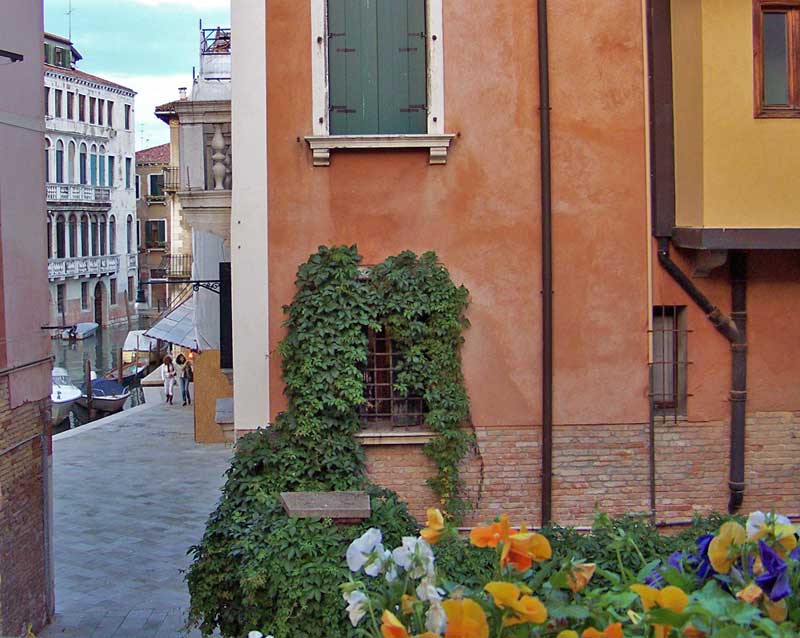