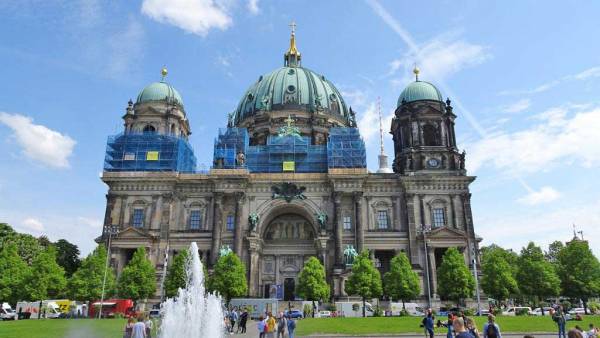 Touring Berlin is very different than visiting most tourist destinations in Europe. That’s because World War II bombing and the communist influence have left Berlin without an old town. Historic structures are mixed with modern buildings and apartment blocks throughout the city. The only location that has a European Old Town feel is the Gendarmenmarkt Square. The ongoing construction and renovation in Berlin makes the city feel incomplete. 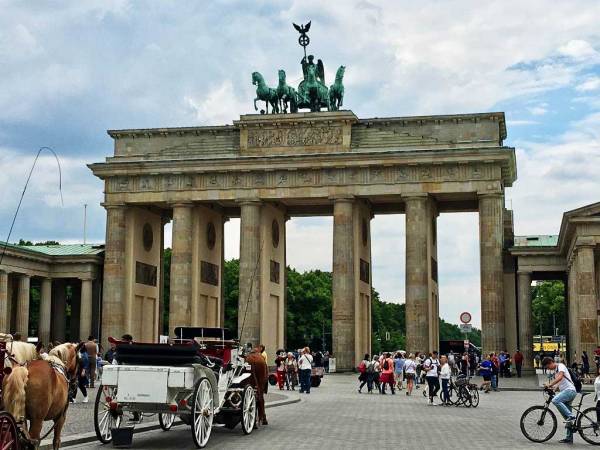 We arrived at the Main Train Station in Berlin on the express train from Dresden. Get used to the name Hauptbahnhof in Germany, as it means the Main Train Station. You can also get to Berlin through its two airports called Tegel and Schoenefeld. Although a newer airport has been under construction for 15 years, it hasn’t been able to open successfully. Check out Why Berlin’s 15 Year-Old Airport has Never Had a Flight for info on that.

With a day and a half for touring Berlin on our own, we decided to get a Berlin Card. Our Berlin Card option included unlimited transportation plus access to the major museums on Museum Island. We made good use of the Berlin Card on buses, trams and S Bahn trains. We got an unexpected bonus when the Berlin Card included the TXL bus to Tegel Airport when we left. 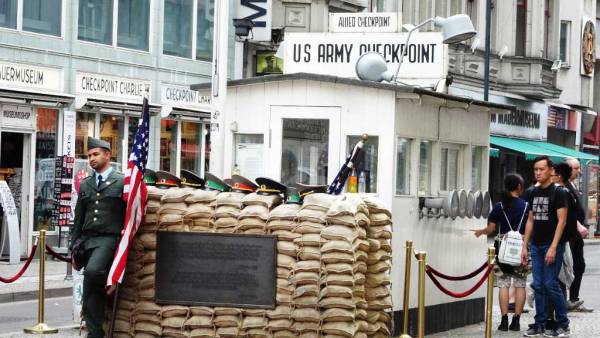 Our first stop using our Berlin Card was a short train trip to Alexanderplatz on the S Bahn line. There are so many S Bahn lines running to Alexanderplatz that you usually wait less than 2 minutes for a train. We chose to stay at the Park Inn by Radisson. Our corner bedroom on the top floor was a great retreat. The view was so nice that we never went up the Berliner Fernsehturm Tower, which we could see out our window.

By early afternoon the weather was still sunny and we immediately began a walking tour of Berlin. We headed down Alexanderplatz past the Tower and St Mary’s Church to the Berlin Cathedral. The Cathedral was being restored, like so many things in Berlin. Next we used our Berlin Card to see the Neues Museum, which is where you will find the famous 3,000 year old Egyptian Nefertiti bust. 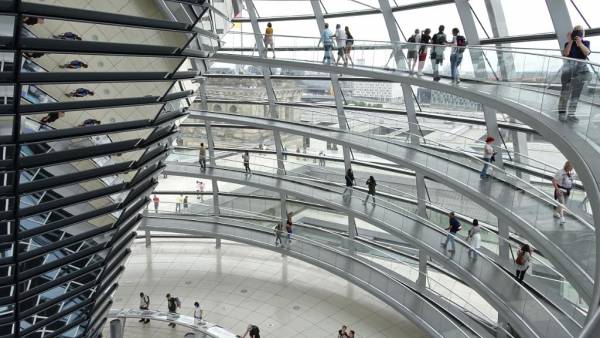 We continued our walking tour by heading down Unter den Linden St past the German Historical Museum, the Neue Wache Memorial and the Opera House. The street was busy with congestion and construction, so we used the Berlin Card to hop the #100 bus to the Brandenburg Gate. Beside the Brandenburg Gate is the Reichstag Dome. You need to reserve your entrance to the Reichstag even though it’s free admission. You also need photo ID when you get there. That’s because at the top of the Reichstag, you can look right straight down into the Bundestag German Parliament. 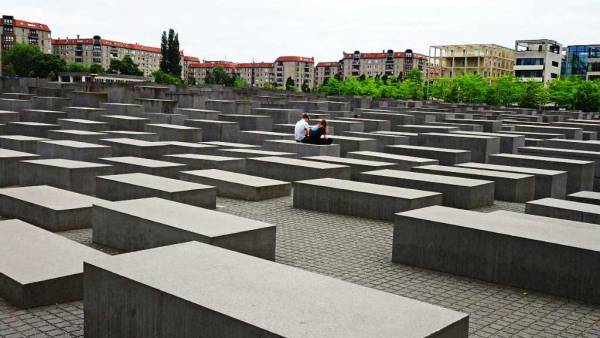 Memorial to the Murdered Jews of Europe

Memorial to the Murdered Jews

A short walk from the Brandenburg Gate brings you to the Memorial to the Murdered Jews of Europe. The site is a full city block of concrete rectangles of various heights and dimensions. You can walk down the rows between the columns. Many people think it’s disrespectful to climb or sit on the memorial blocks. From the Memorial to the Murdered Jews of Europe, we continued Touring Berlin by walking to Alexander Platz. Then we headed to a historic section of the Berlin Wall at the Topography of Terror. Next we took a short walk to Checkpoint Charlie. Although Checkpoint Charlie is very famous, it’s now simply a popular tourist photo op of a small building in the middle of the street. 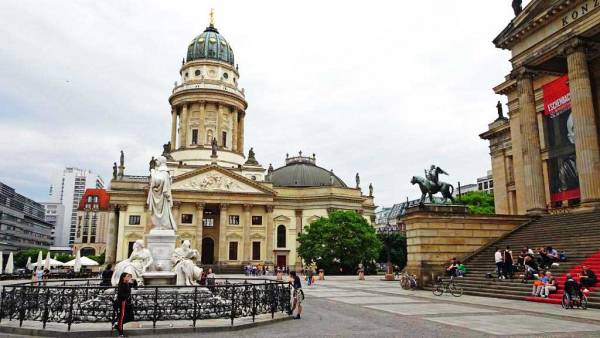 Our favorite stop on our afternoon walking tour of Berlin was the Gendarmenmarkt. This square has the charm of an Old Town. The churches and palaces around the square are beautiful. The lack of construction and the lack of modern buildings make this a special place to visit in Berlin. The reduced number of tourists here also makes it very pleasant.

From there we took the #100 bus back to the Park Inn Radisson. For dinner that night we took the S Bahn to the Main Train Station, because it has so many options to choose from. Then we watched a fabulous thunderstorm from our hotel room. 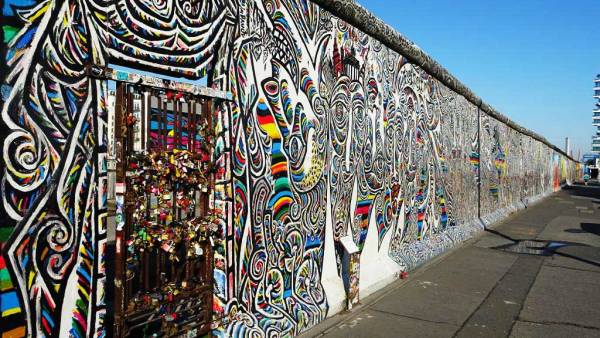 On our second day Touring Berlin, we started early by catching the S Bahn to the East Side Gallery of the Berlin Wall. In the early morning there were no tourists at the wall and only a few joggers passed by. We saw the famous picture of Fraternal Kiss by Brezhnev. Then I just had to ride the tram back and forth over the Oberbaum Bridge.

From the East Side Gallery, we took the S Bahn over to the Kaiser Wilhelm WWII Memorial Church. The Kaiser Wilhelm Church hasn’t been restored since it was bombed during World War II. Most of the church is still standing, but the top is missing and the stained glass was all blown out. Efforts are under way to restore the church, but its destroyed condition makes a statement about Nazi Germany that you won’t soon forget. 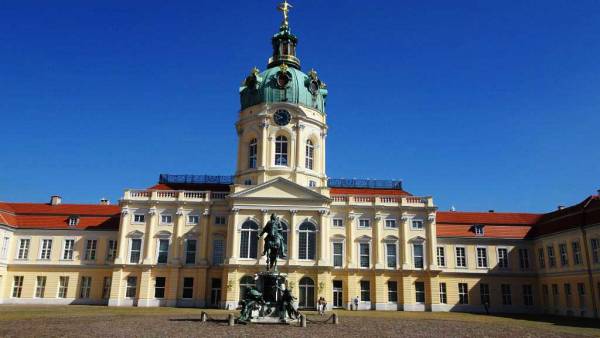 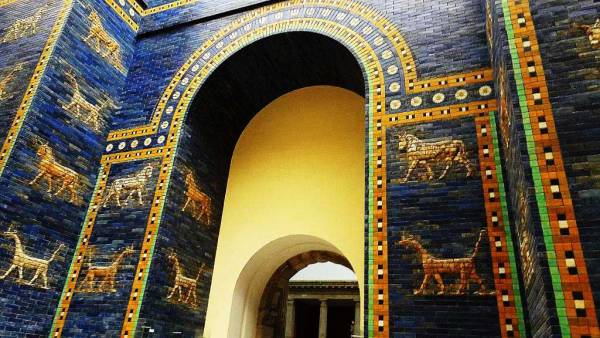 After lunch we continued touring Berlin by catching a tram to Museum Island. We started with the Pergamon Museum, which was a highlight of our time in Berlin. The reconstruction of the Ishtar Gate from Babylon was amazing. The Roman ruin is a complete full scale reconstruction inside the museum. The Aleppo Room, the Mshatta Facade and the Assyrian sculptures were also impressive. Unfortunately the Pergamon Altar was under restoration and not open to the public.

After the Pergamon Museum we visited the Bode Museum next door. The entrance to the Bode Museum is magnificent. You can walk through the entrance to reach the cafe without paying a museum entrance. The Bode Museum has many rooms where you must open doors to enter the next room. One door we opened led us to two more doors to choose from, which felt like a Hollywood murder mystery set. The confusing thing to me was that I saw several gorgeous paintings that I’d also seen previously in the Prado Museum in Madrid, like the Descent from the Cross. Turns out the Bode Museum version is a reproduction by a different artist. hmmm.

By now we were worn out from our day and a half touring Berlin. We’d had enough of currywurst too. So, we had a wonderful Italian dinner at a restaurant in the Galeria Kaufhof Mall. The next morning, our Berlin Card also worked to get us to Tegel Airport and the end of our Europe 2019 vacation.