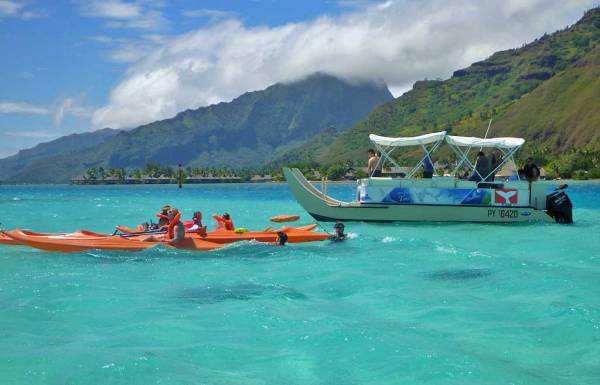 The Stingray Reef Shark Snorkel excursion is amazing. Most of the tours head to a location inside the reef a short distance north of the InterContinental Moorea Resort & Spa. The tour has several versions including 2 hours, 4 hours with lunch on a motu (small island) or 6 hours that adds a trip down the two large bays on Moorea and a search for whales and dolphins. Those staying at the Intercontinental have an advantage in picking the time for a tour, as it’s easy to assess the weather first and then walk down to the pier for the next boat. 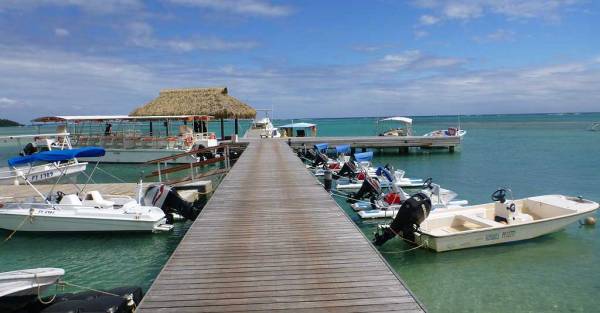 Local tour operators offer a substantial discount over the rates offered by the hotels. For example the 6 hour tour booked from the InterContinental was $110 US in 2015 whereas the local price was $55 and included pick up and return to your hotel. Check out the information booth at the ferry landing in Papeete for information on discount local tours.

For $48 US we headed straight to the stingrays on a ride that was only a few minutes long. The water en route was every shade of blue imaginable. The location is in shallow water where most visitors are able to stand on the sandy bottom. We were immediately greeted by 7 large stingrays. The tour guide feeds them, so they jam up against the boat and it’s actually difficult to enter the water, as they block the way in. 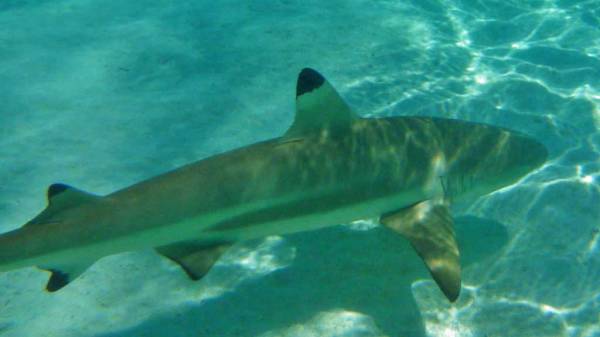 Black tipped reef sharks make for exciting snorkeling. These sharks look dangerous, but they don’t attack humans. In the water that day there were 6 black tipped reef sharks circling us ominously. The closest they ever came was about 5 feet away. The guide did not feed them, but they looked for leftover scraps from the stingray feedings. The guide warned us not to touch them. He said that years ago the sharks stayed outside the reef and there were two parts to the excursion. When the sharks discovered the regular stingray feedings, they joined the show inside the reef. 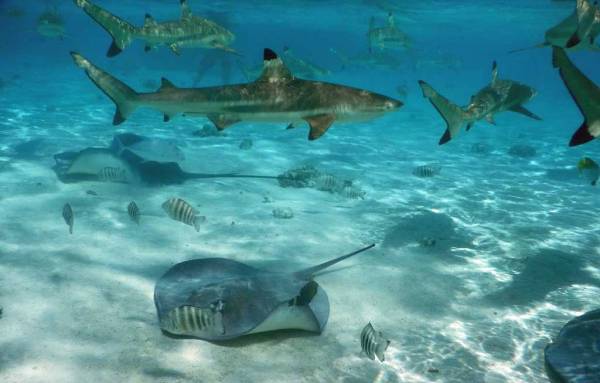 The rays are safe to touch on the back, but it’s important to avoid their underside with extended fingers. Their mouths are quite strong and they can’t see whether it’s fish or fingers they are biting. I saw a giant stingray that must have been 12 feet long. The giant stingray dwarfed the large reef shark beside it.

I always thought it would be exciting to swim with sharks. I wasn’t disappointed. The stingray reef shark snorkel was the highlight of my visit to Moorea. See more of my snorkel pics at Take That Vacation – Shark and Ray Tour.