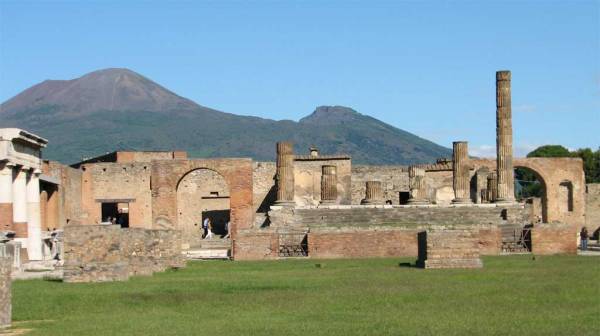 Our time in Naples was crazy, but fun.  We picked the UNA Hotel Napoli as our Naples Hotel for our Pompeii Day Trip.  The UNA Hotel Napoli is on the Piazza Garibaldi across from the train station.  This was a lovely room with a full bath, marble tile, wide screen TV and remote controlled lighting.  There was a view of the piazza.  When you opened the windows, the sounds of Napoli came blasting through.

Garibaldi Square has cars coming in from 5 directions in a complicated traffic circle.  There is no standard rule about where people or cars should be.  Throw you life in your hands and cross wherever you feel you might survive.  The horn honking is continuous; indicating that either the driver politely wants you to know they are there or impolitely wants you to get out of the way.  Add a few sirens and encapsulate this in a ring of street vendors and you have the constant din of Napoli.  Lots of fun. 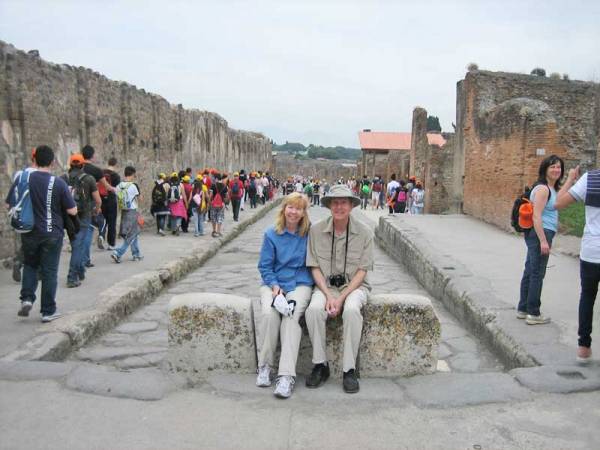 Tim and Viki at Pompeii

The Circumvesuviana train is a small train full of graffiti and full of passengers heading to Pompeii.  Nothing tells you which stop to get off at for Pompeii .  The throng of tourists excitedly try to figure out when to get off the Circumvesuviana.  Eventually the word spreads among the passengers that it’s time to get off.  Then when you exit the train, everyone tries to figure out whether to head left or right to get to the entrance gate for Pompeii.  A truly Italian adventure. 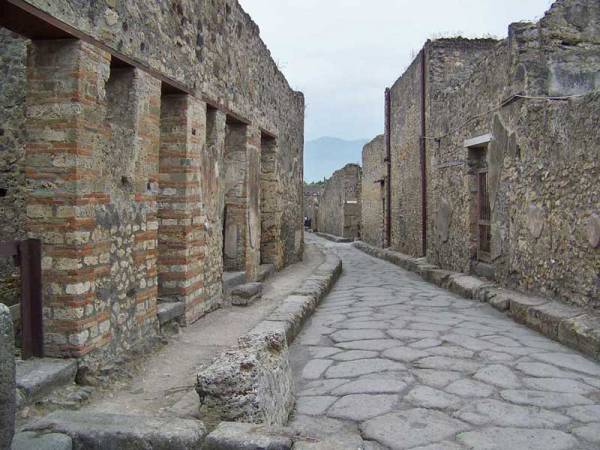 After paying your entrance fee, you are free to wander the ruins without a guide.  The ruins of Pompeii are quite amazing, not only for the ruins but for the size of the site.  We used the Rick Steves podcast map, which was great.  We enjoyed following the map for three hours.  Some of the main routes were jammed full with tourists, but it was easy find find site streets where you were completely alone. 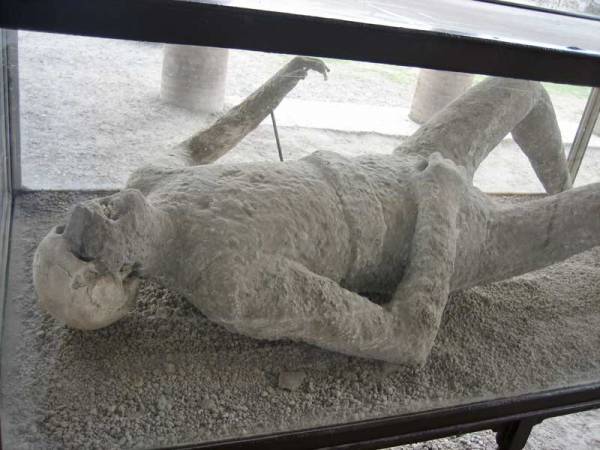 The forum and the Temple of Jupiter were impressive not only in their own right, but for the view of Mount Vesuvius looming ominously behind in the distance.  Stone steps crossing the lanes allowed people long ago to cross without getting wet.   You could tell by the pattern of stone steps whether each lane was one-way or two-way chariot traffic.  The variety of ruins is remarkable.  Former residences such as the House of Vettii and the House of Faun were interesting to walk through.  Some mosaics are preserved at these places.  We walked past large kiln ovens and through brothels.  We also visited the amphitheater.  The plaster casts of the human bodies excavated from the lava flows were eerie.

The chaotic city of Naples and the confusing route to Pompeii ended up adding to the adventure of our Pompeii Day Trip.  The ruins of Pompeii are a day trip that shouldn’t be missed. 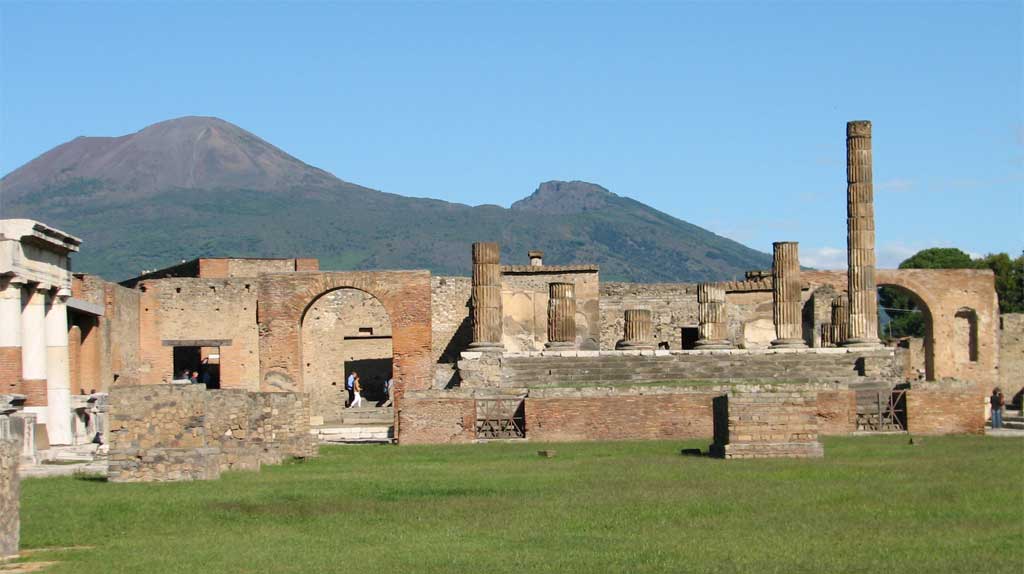 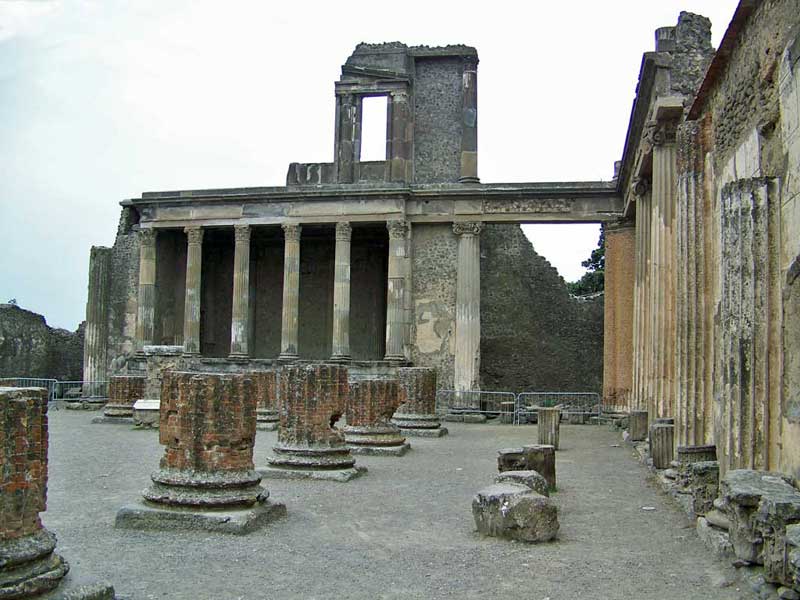 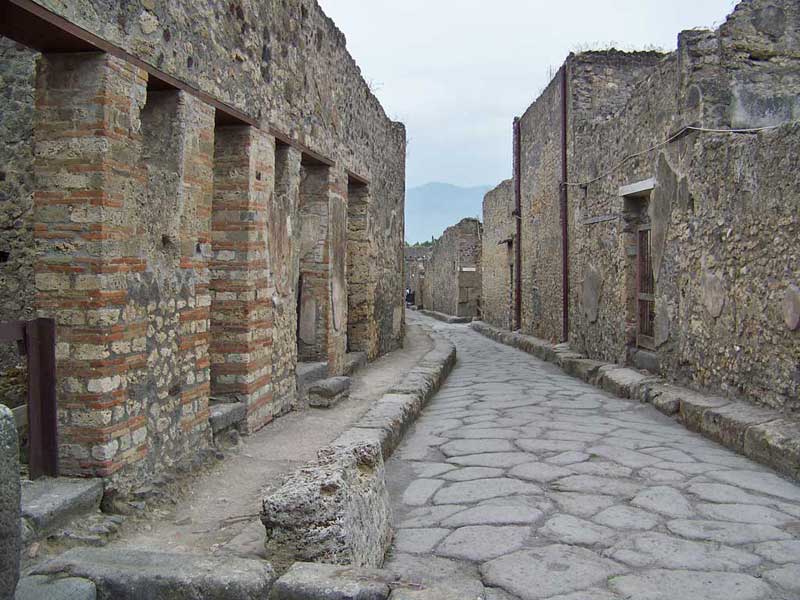 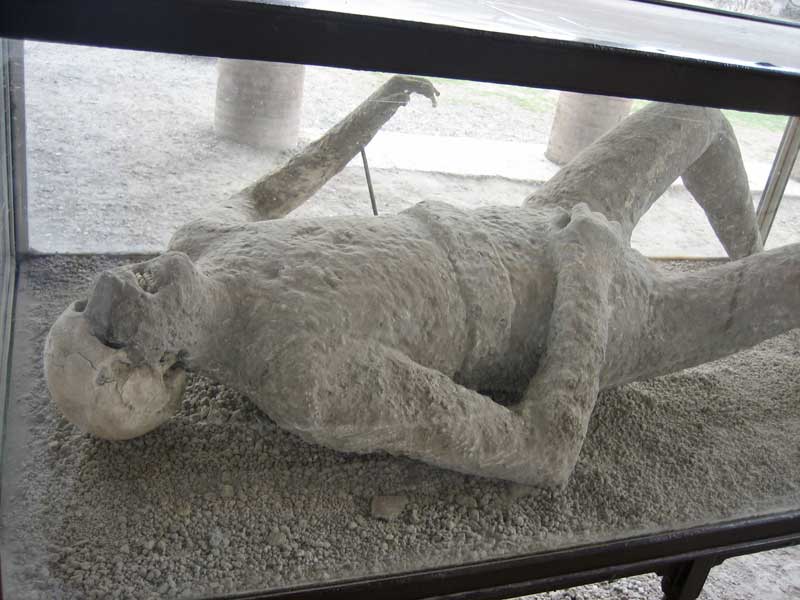 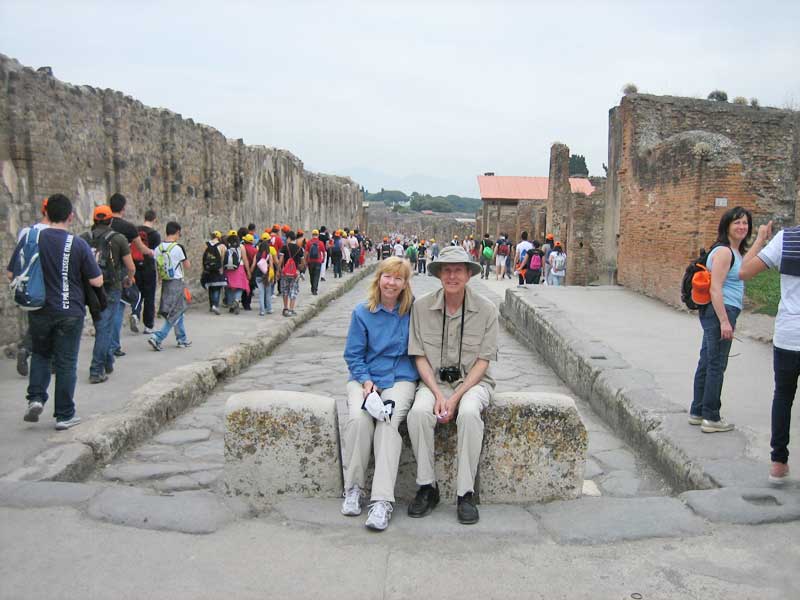 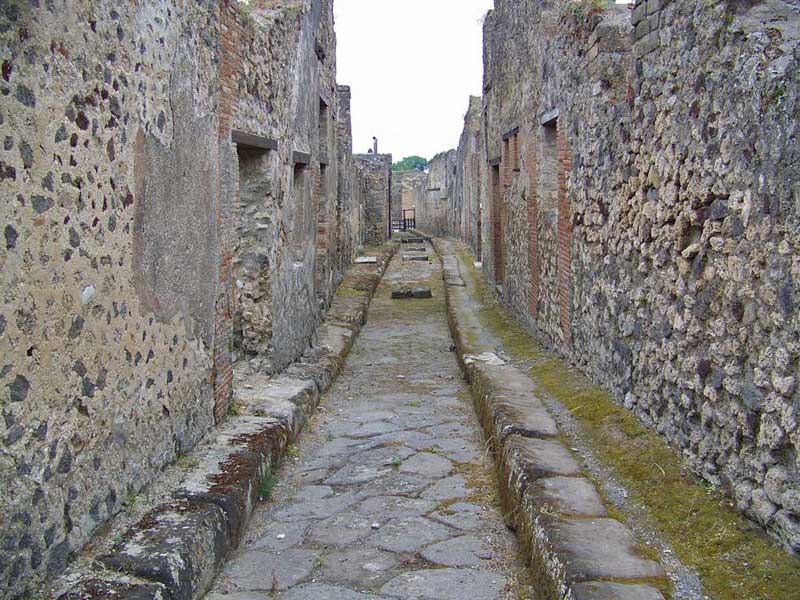 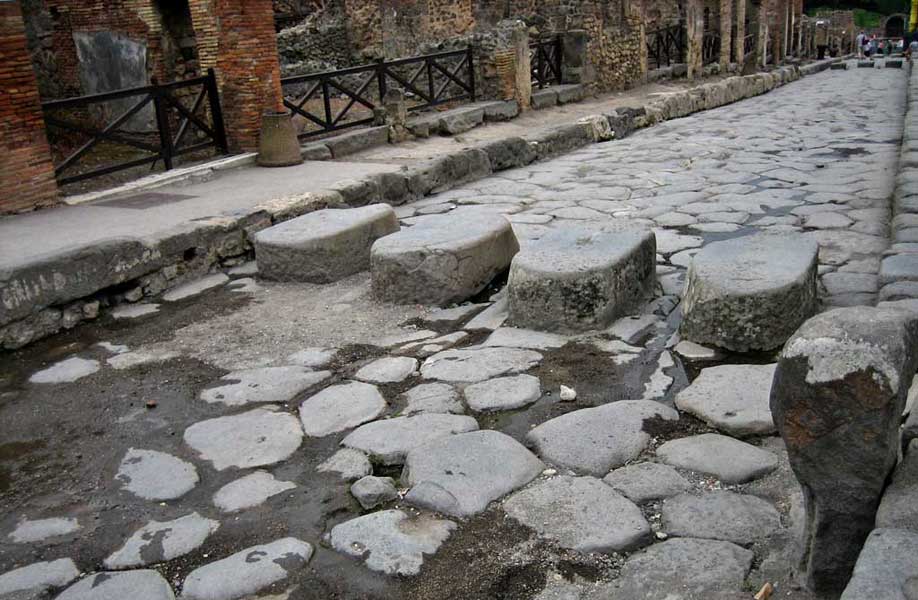 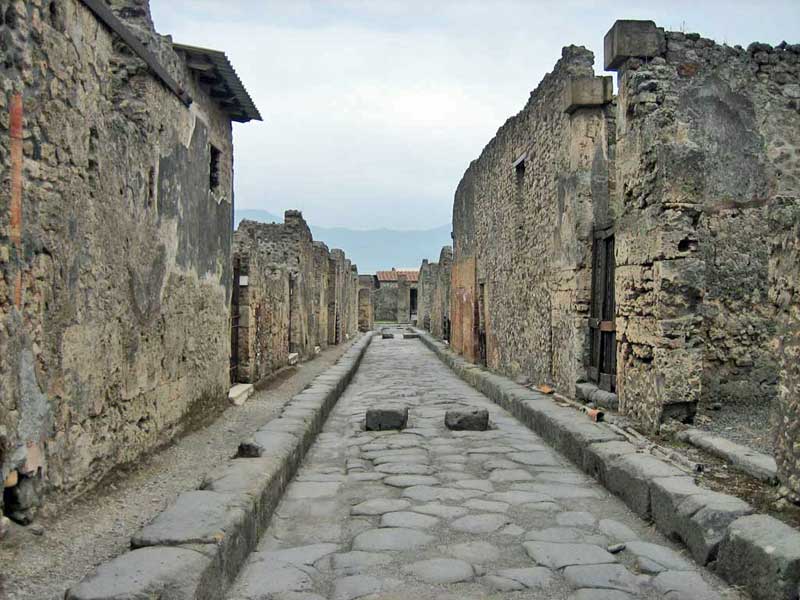 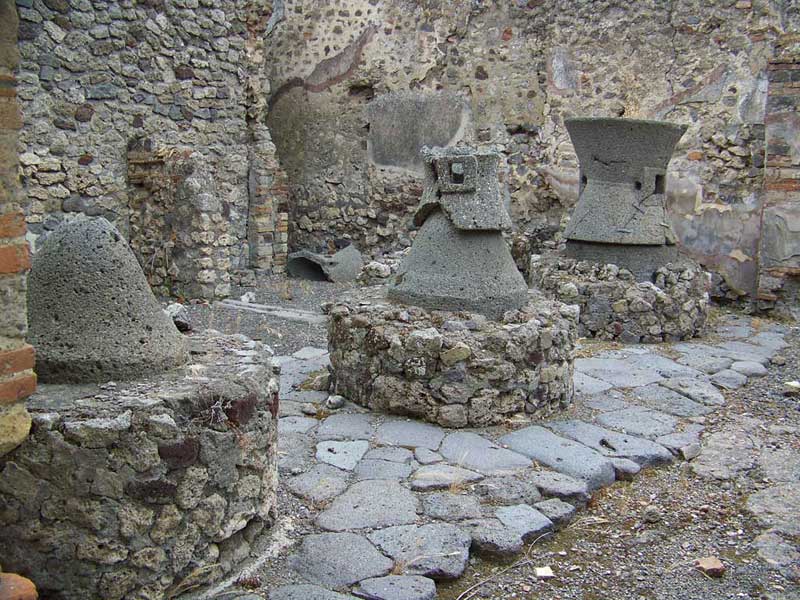 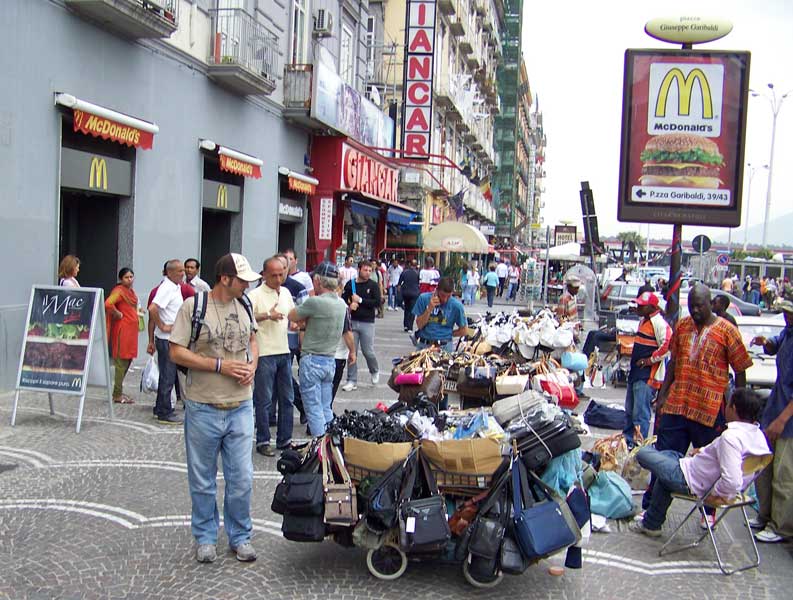 Naples Traffic at the Train Station