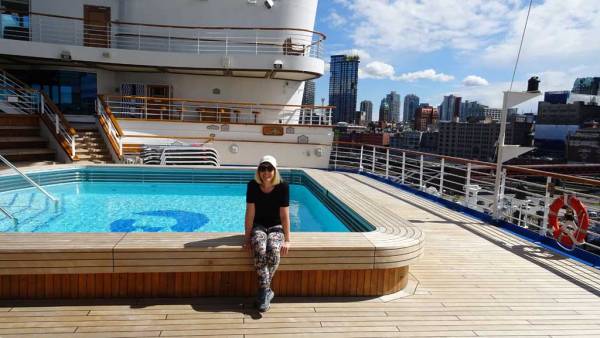 Getting to your Star Princess Alaska Cruise in Vancouver BC is easy.  The Star Princess docks downtown.  The Canada Line metro train runs from the Vancouver International Airport directly to the Waterfront Terminal.  The Waterfront Terminal is at the Canada Place cruise ship terminal.  The Canada Line only costs a few dollars and even allows you to tap a charge card and ride.  You can also purchase tickets from machines at the Vancouver International Airport.  The Canada Line is easy to use and inexpensive, so you don’t need to purchase a transfer from your cruise ship company. 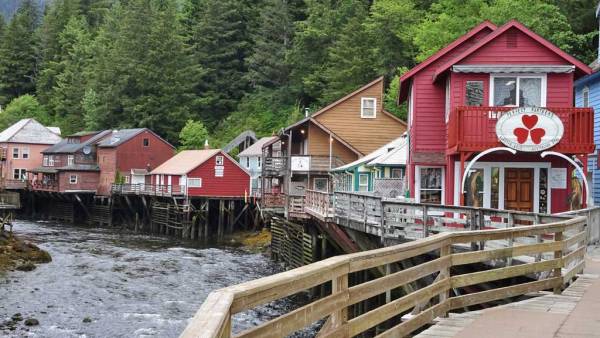 After a full day at sea, our Star Princess Alaska Cruise arrived in the early morning at Ketchikan.  Eight killer whales passed right beside the ship in the narrow channel less than a mile from the dock.  I decided to create my own self guided Ketchikan Walking Tour.  We started by walking along Creek St.  We were there so early that we were all alone, which was very nice.  Next we rode the funicular up to the Cape Fox Lodge, where we admired the dug out canoe hanging from the rafters.

After that we wandered along the Ketchikan River. We visited the Totem Heritage Center and the fish hatchery, which is no longer open to the public.  Then we walked down the Married Man’s Trail, which was short and pleasant.  The Married’s Man Trail is easier going down because it is a steep path with lots of wooden steps. Back down at Creek St we saw the salmon ladders.  The salmon weren’t around though, because the salmon run doesn’t start until the end of July in Ketchikan. 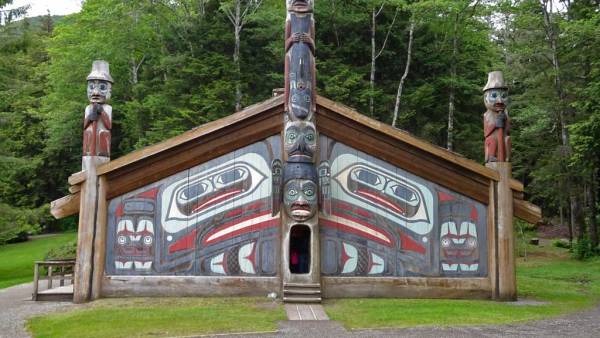 Our second self guided tour of Ketchikan was a trip on the local bus to Totem Bight.  You can get information on where to catch the local bus from the Tourist Information Centers at berth 2 or berth 3.  We caught the Silver Line North on the street along the harbor.  The fare was $2 or a day pass was $5. It took less than half an hour to reach Totem Bight.  The bus drops you off in the Totem Bight parking lot.

A $5 entrance fee and a short walk through the forest brought us to the totems.  The Totem Bight poles all face the ocean front.  A shed with a glass side lets you see a pole they are working on. The clan house is very large.  You enter the Totem Bight clan house through a small hole at the front.  Inside a large group was listening to a guide from an organized tour.  We only spent about 10 minutes at Totem Bight.  That allowed us to catch the Silver Line bus a few minutes later and return to Ketchikan.  Otherwise we would have waited an hour until the Silver Line bus made its next visit to Totem Bight. 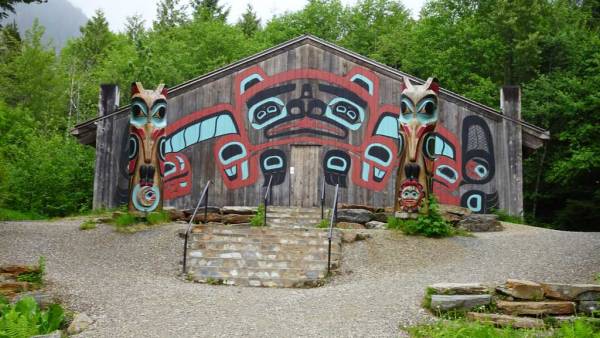 On the way back from Totem Bight to Ketchikan, we learned that the same bus continues on to Saxman Village.  The Silver Line bus takes the back route through Ketchikan, so the bus route goes high up on the hillside away from the harbor.  The bus is then called the Silver Line South, but it’s the same bus as the Silver Line North.  There’s really only one bus.  The Silver Line stops at the ticket entrance to Saxman Village, which is about three miles south of Ketchikan.
The fee to wander past the Saxman Village totem poles was $5.  The clan house is not open to drop in visitors though.  You have to be on an organized shore excursion to get inside the clan house and see the native dancing.  Organized tours also can enter the workshop where totem poles are carved.

We spent about 10 minutes at Saxman Village.  When the Silver Line bus came by on its return to Ketchikan we were waiting at the stop.  This was a perfect way to see Saxman Village on a quick trip.  In total we spent $15 each in Ketchikan.  For that price we got 3 bus rides and two park admissions each.  Plus we did our self guided tour of Ketchikan for free.  What a great way to see the sights of Ketchikan. 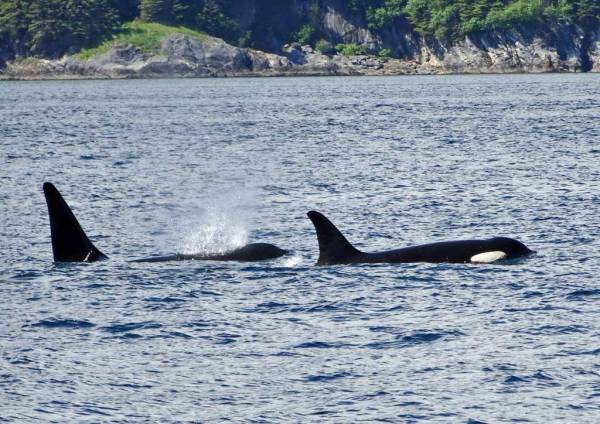 The weather was perfect for our shore excursion on the Star Princess Alaska Cruise visit to Juneau.  We started out at 8:30 by riding up the Mount Roberts Tramway for a view of Juneau under sunny clear skies.  Next I headed out on a Juneau Whale Watch Tour.  The tour takes you to Auke Bay.  The 48 passenger Juneau Whale Watch catamaran was fast and comfortable.  Full glass siding provides great views.  When you stop, there are viewing areas at the front and on the top deck.

Our first Humpback whale sighting was close to the shore.  The Humpback whale was lunge feeding, which is unusual.  After a while our pilot sped off a long distance up the bay.  We quickly passed a couple other Humpback whales and came instead upon a large pod of killer whales.  Killer whales are also called Orcas.  The killer whales moved steadily.  Their backs kept showing as they swam.  At one point a large male killer whale bobbed its head out of the water too. 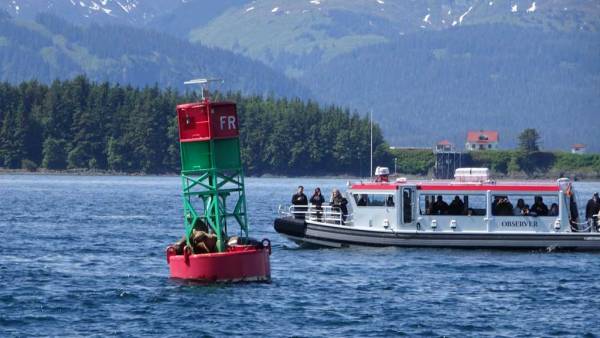 Even more impressive to me were the great mountain vistas along the fjord.  We saw the Mendenhall, Eagle and Herbert Glaciers against the snow capped peaks ringing the sea.  After the whale watching, I added on a trip to Mendenhall Glacier.  I made the 45 minute round trip hike to the waterfall near the glacier.  The weather as sunny, warm and clear.  Another perfect excursion.

After lunch on the ship, we took a second trip up the Mount Roberts Tramway.  The second trip was free, but not quite as much fun as the earlier trip that morning.  The crowds from all the cruise ships made it very busy and the afternoon light wasn’t as crisp as it as in the early morning.  Even so, the view was amazing. 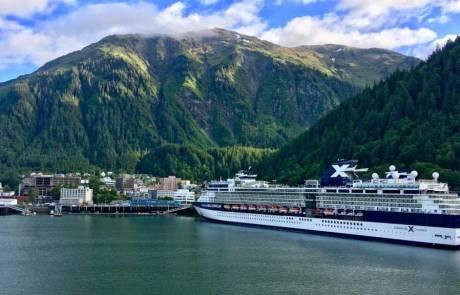 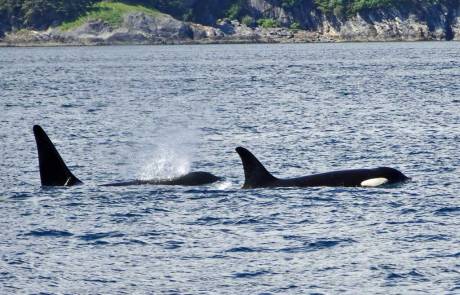 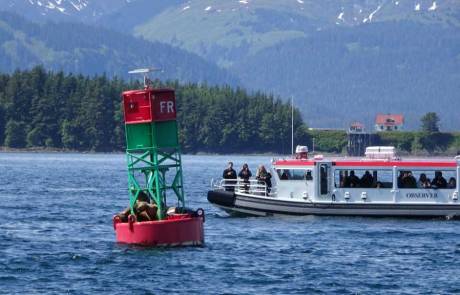 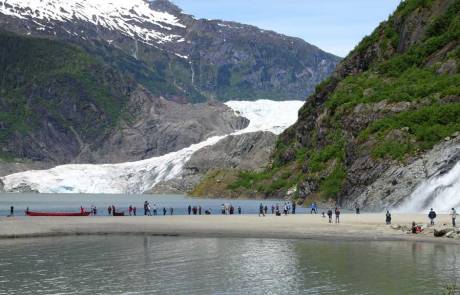 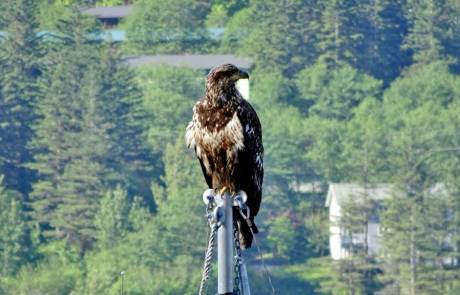 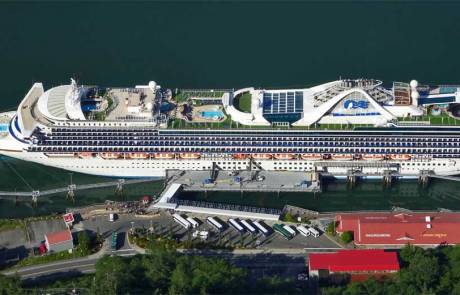 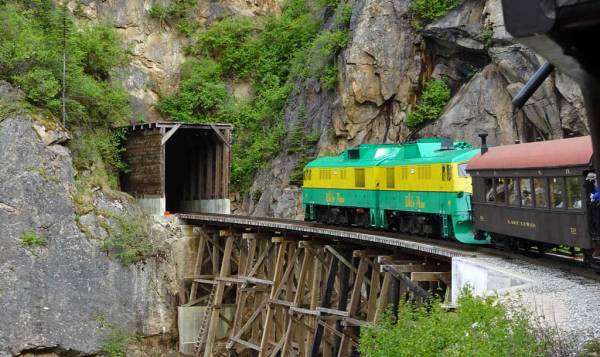 In Skagway, I chose to repeat an adventure I’d had 9 years earlier on the White Pass & Yukon Route Railway.  This narrow gauge railway follows the route the Klondike Gold Rush miners made on foot in the late 1890s.  You can step out on the platform between railcars, which adds to the excitement as you cross trestles and enter tunnels.  The White Pass & Yukon Route is a highlight of any visit to Skagway. 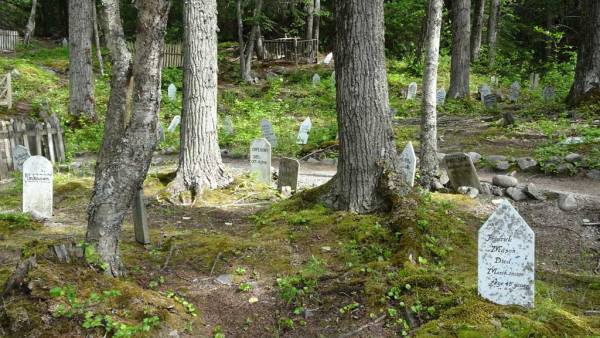 After the White Pass & Yukon Route Railway ride, I also took a 4 mile round trip hike to the Skagway Gold Rush Cemetery.  The cemetery was in a pleasant treed setting.  Many of the grave markers were dated from the 1890s.  I saw the markers for Frank Reid and Soapy Smith who died in a shootout in 1898.  The short hike to Lower Reid Falls was a nice addition to the visit.  I arrived between tours, so I was all alone at the cemetery and the lower falls.  If you aren’t up to a long hike, you can visit the Gold Rush Cemetery with Skagway Alaska Street Car Tours. 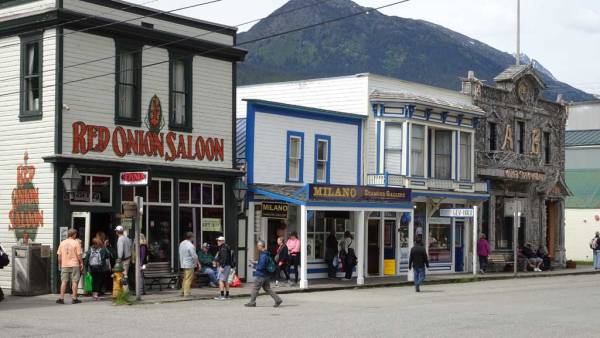 The town of Skagway itself was a small town tourist trap filled with more than 13,000 cruise ship passengers that day.  The most popular stop was the Red Onion Saloon.  The saloon was dark, with low ceiling fans and small wooden tables.  Waitresses were dressed in Klondike Gold Rush outfits that covered most of their bodies but revealed lots of cleavage.  The Red Onion Saloon looked authentically scary despite its overwhelming popularity. 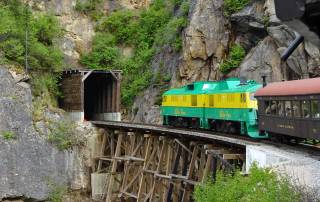 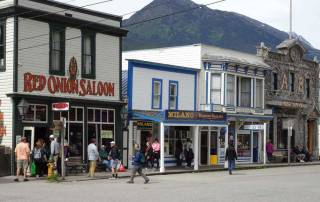 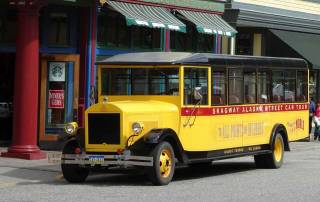 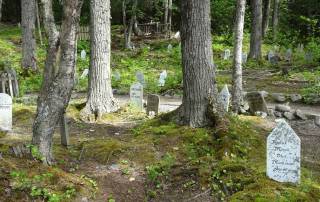 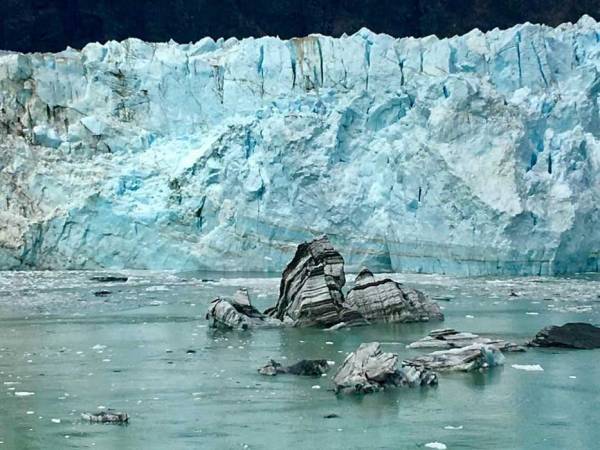 The afternoon voyage up Glacier Bay was worthwhile even though it was overcast and cold.  The Star Princess first cruised past a small island full of Steller’s sea lions.  Then we cruised past the Reid Glacier.  Next, the John Hopkins Glacier was impressive in its narrow fjord.  The Star Princess barely had enough room to turn around to exit the John Hopkins Glacier fjord.

The Margerie Glacier was the highlight of Glacier Bay.  This tide water glacier has a height of about 200 feet.  The Star Princess paused right beside it, so we had an intimate view from our balcony for a half hour.  The Margerie Glacier was very active during our visit.  I enjoyed the sharp cracking and rolling thunder sounds that the moving ice produces.  We also saw the ice calf several times.  When the ice calves, the sound is delayed from the sight of the falling ice, so you have to keep your eyes peeled to see the ice fall.

Did you know that John Muir visited Glacier Bay in 1879 and Captain Vancouver sailed past in 1794?  When Vancouver visited Glacier Bay, the bay didn’t exist.  At that time, ice completely filled the bay.  By the time that John Muir visited in 1879, he noted the ice had retreated 48 miles.  By 1916 the Grand Pacific Glacier had retreated 65 miles and it is no longer a tide water glacier today. 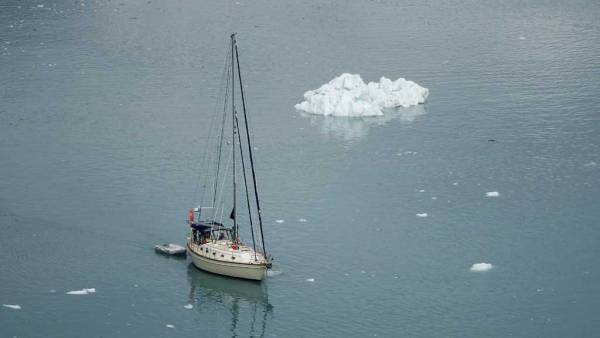 Our late evening journey down the College Fjord was obscured in rain and mist.  Even so, you get so close to the glaciers in College Fjord that the experience is impressive.  First we passed two hanging glaciers.  Then we saw the undulating layers of the Bryn Mawr Glacier and the ribbon of spires of the Smith Glacier. The Harvard Glacier is impressive as it fills the entire end of College Fjord.  The Harvard Glacier is three times as wide as the Margerie Glacier in Glacier Bay.  Each side of the Star Princess got the chance to view the Harvard Glacier up close for a half hour.  The ice made lots of noise and we enjoyed the glacier calving several times.

In the morning we finished our Star Princess Alaska Cruise with a bus ride through a 2.5 mile one way tunnel.  The Anton Anderson Memorial Tunnel was built by the military during World War II and the single lane is now shared by cars and trains.  Our bus then followed the Seward Highway along Cook Inlet to reach the airport in Anchorage in about an hour. 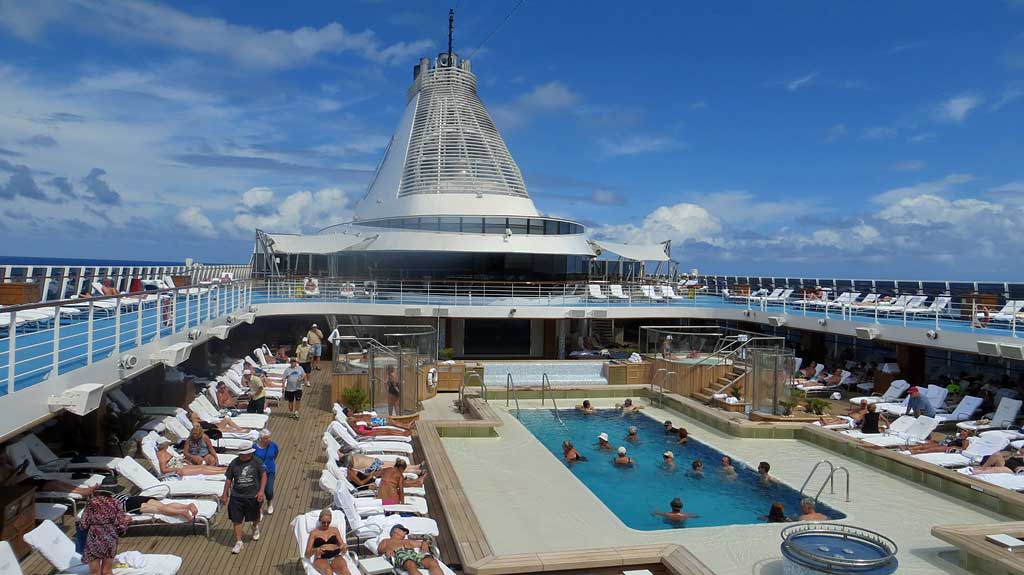 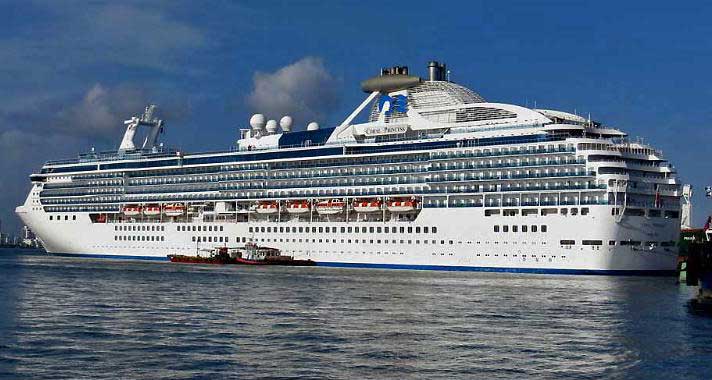 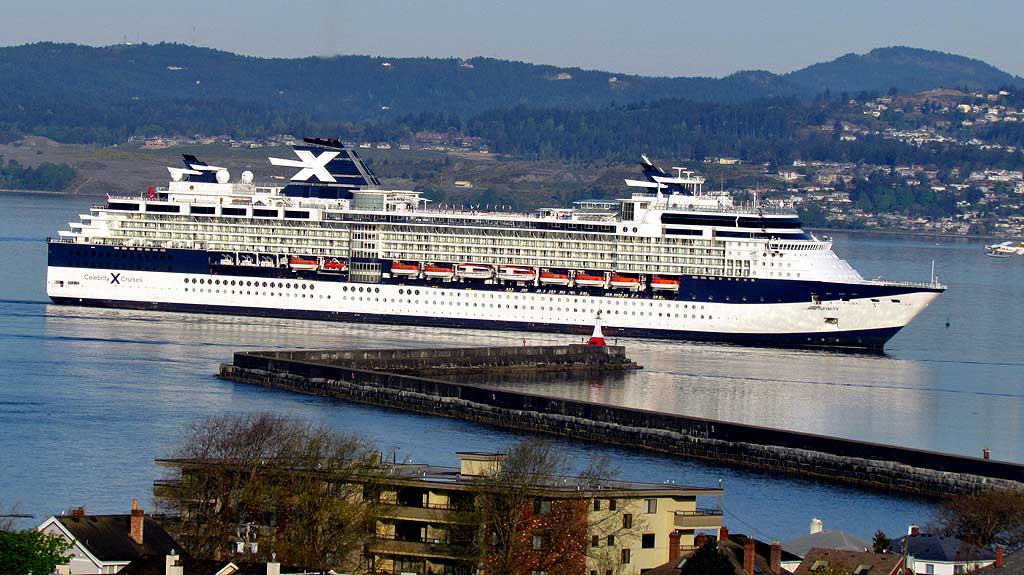