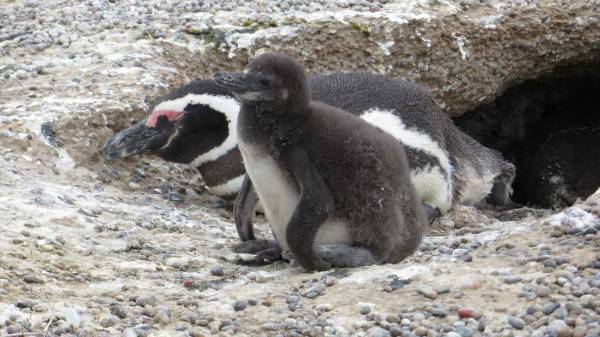 Punta Tombo Shore Excursion – On Our Own

From Puerto Madryn on the Oceania Marina, we chose independent travel for our Punta Tombo Shore Excursion.  Late December is a good time of year to visit the penguin colony at Punta Tombo.  At that time of year penguin chicks are walking about.  There were nearly half a million penguins scattered around the desert vegetation.

We rented a car from Wild Skies for $110 US including insurance.  They delivered the car to the cruise ship pier and did the paperwork at the car.  When we returned they met us again at the pier and handled the refueling too.  The rental saved us 50% off the cruise excursion price for two.  It allowed us the luxury to visit Punta Tombo at our own pace. 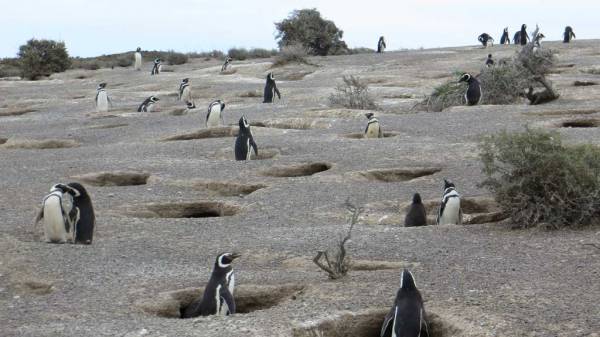 Punta Tombo Shore Excursion – Getting There

The route to Punta Tombo from Puerto Madryn is long, but not difficult.  It takes just under three hours one way.  From the port you head through town to the #3 highway.  This is Patagonian desert and most Argentinians travel these roads at speeds well in excess of 60 mph.  Take the #3 south to Trelew.  Trelew is a Welch name, but the Spanish pronounce it as Treleu.  From there stay on #3 past the turnoff to Rawson.  About 40 minutes south of Trelew, the intersection with #75 to Punta Tombo is clearly marked.  Half of the remaining 40 miles is excellent two lane highway.  The final section is top quality wide lane gravel. 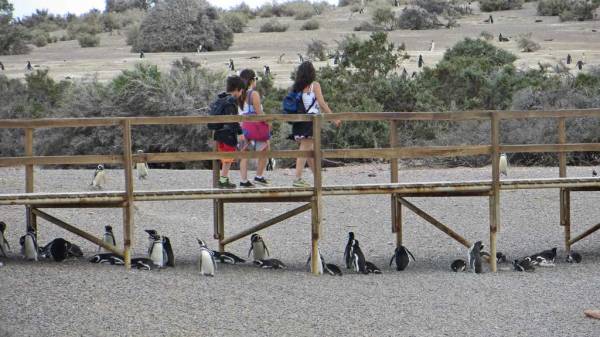 The fee to enter the site in 2015 was $20 US per person.  Foot paths are well maintained.  Park guards patrol the path to make sure visitors don’t leave the path or touch the penguins.  The penguins ignored us. Their burrows spread over an extensive area.  Some nest are only inches off the pathways.  Once in a while, a penguin stood or laid directly on the paths and refused to move.

The site highlights the unusual diversity of penguins.  At the beach they display their adept skills at swimming.  After feeding, the adults make their awkward upright march across the beach and well back into the hills.  The penguins dig burrows into sandy soil and sage. It’s hard to imagine how a penguin could ever scoop the dirt out.  Young penguins grow up in the safety of the burrows. 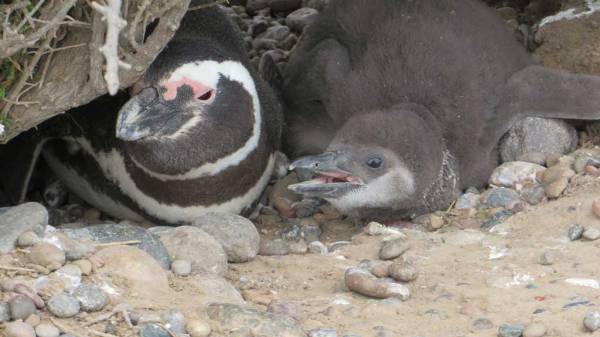 The temperature reached 85 F the day we visited.  Chicks and parents both looked strained under the heat.  Several penguins took shelter in the shade under the wooden walkways.  Seeing penguins flourish in a hot desert environment seemed contradictory to their Antarctic image.

The Punta Tombo Shore Excursion is the premier attraction of the Puerto Madryn and the Valdes Peninsula.