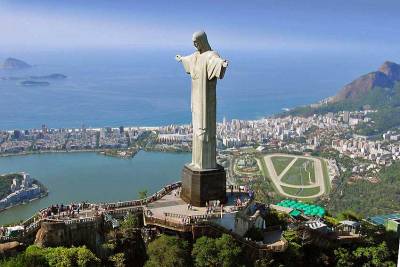 Christ the Redeemer (Cristo Redentor) – Visit the famous statue of Christ. Take the Corcovado Train (Trem do Corcovado), the oldest tourist ride in the country. The mountain is called Corcovado, which translates to the hunchback. At the top, the huge statue of Christ the Redeemer looks down over the city and so do you. The statue has become synonymous with Rio. You can reach the cog train station by taking the 580 Express Bus from the Largo do Machado metro station. Tour buses also drive up to Christ the Redeemer, but the train is by far the most popular option. 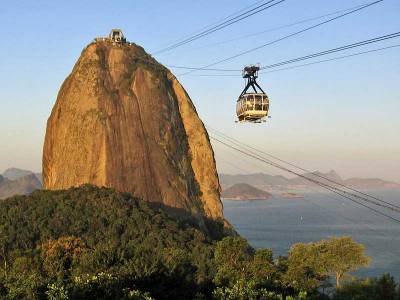 Sugarloaf Mountain (Pao de Acucar) – The Sugarloaf cable car is a major attraction when you visit Rio de Janeiro. Take the two stage gondola ride up the 390-foot granite mountain for views of Guanabara Bay, Botafogo Beach to the north and Copacabana to the south, with the city spread in between. Across the way, Christ the Redeemer faces directly toward Sugarloaf. Half Day Sugar Loaf Tours usually include downtown attractions as part an the excursion. 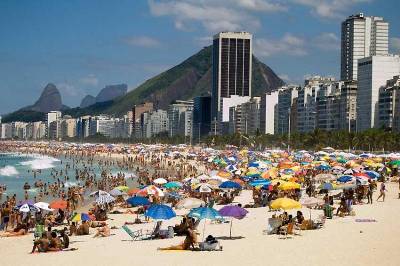 Copacabana – the main beach in Rio.  It was large enough to host more than a million fans for a Rolling Stones concert in 2006.  This is the most popular beach for tourists.  On weekday mornings, Atlantica Avenue on Copacabana switches from a two way avenue to one way, so that it’s easier to get to work downtown.  It’s disorienting to see the vehicles driving against the directional arrows printed on the pavement.  On Sunday half the street is opened to pedestrians and vehicles can only travel one way, away from downtown.  With a 24 hour bike lane at the beach too, it takes concentration to cross the street to reach the beach at Copacabana.

Ipanema – It’s the next beach after Copacabana to the southwest. Take the Metro Rio running just back from the Copacabana beach and ride a few stops to the station at Praca General Osorio in Ipanema. Then visit the Church of Our Lady of Peace facing the square at Praca Nossa Senhora da Paz; Lake (Lagoa) Rodrigo de Freitas; and the new Peace Terrace. Post #9 on the beach is the most popular, but head toward Post 12 in Leblon to join the locals. 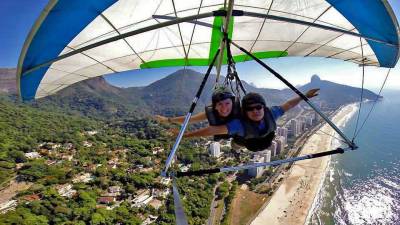 At Cinelandia Metro station on Cinelandia Square, you will find the Municipal Theater, the National Library and the National Museum of Fine Arts.  A short two block walk from the plaza leads to the Santa Teresa Tram (Bonde Santa Teresa).  The tram line connects the city center with the residential inner-city neighborhood of Santa Teresa in the hills immediately southwest of downtown.

The Santa Teresa Tram is all that remains of what used to be the principal form of transportation in the city. From the starting point opposite the 20,000 seat Metropolitan Cathedral, cross the towering Carioca Aqueduct (aka Arcos da Lapa) to Santa Teresa. Then you have the option to take the ride all the way up the hill or stop to see the art collections at the Museu da Chacara do Ceu beside the Parque das Ruinas. On the way back down, get off at the Carmelitas Convent and then walk down the Selaron Steps. 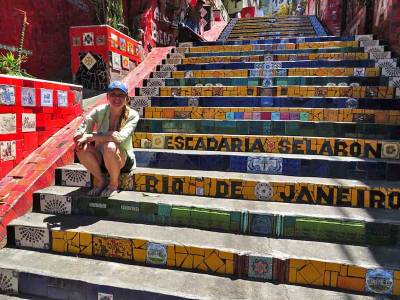 Tijuca National Park – 20 minutes from downtown and you’re in the original rainforests of Brazil. Hike to Pedra Bonita to for close up views of the granite mountain known as Pedra de Gavea. Alternately try a Rain Forest Jeep Tour that includes the Vista Chinesa (Chinese view) and the Monkey’s Waterfall.  Take a hang glider trip back down to the city with Just Fly or Rio Adventures. They start at the Pedra Bonita ramp located in Tijuca National Park. The flight ends at Sao Conrado Beach, just west of Ipanema. The experience and the pilot were perfectly amazing. 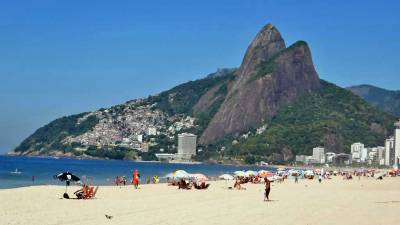 Take a guided tour through a favela (shanty town), such as Santa Marta favela where rock star Michael Jackson filmed. The Babilonia Favela is near the eastern end of Copacabana beach.  Favelas are high density, low end units built on cliff sides that are subject to landslides and have extremely low real estate value. There are a surprising number of favelas throughout the city. Ride the cable car from Estadio da Baiana (Baiana Station) over the favela at Complexo do Alemao. 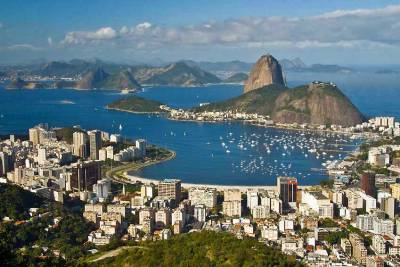 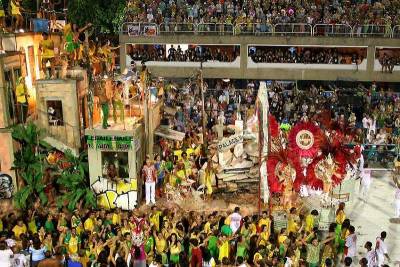 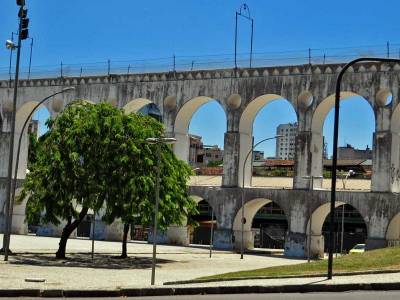 Rio has a tropical marine climate with heavy periods of rain during their summer months of December to March. Tourists often visit during this period, because they are also visiting Argentina and Chile during their best weather at this time. December has the heaviest rainfall. The driest months are July and August with about 2 inches (50 mm) per month. Temperatures vary only a few degrees between summer and winter. Average highs around January (summer) are 29 C (85 F) while lows average 22 C (72 F). During the winter months around July, expect average highs around 25 C (77 F) and lows of 20 F (68 F). July and August are likely the best months to visit Rio. 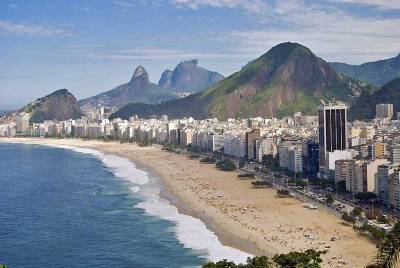 The Metro Rio metro system isn’t like Europe, but at least there is one. Unfortunately it doesn’t extend to the airport, so you can expect to pay for a half hour cab ride to / from the Copacabana hotels if traffic is light. The metro runs on two lines. The north / south line runs from Pavuna in the north, along the edge of the harbor through downtown & Copacabana until it reaches Ipanema in the south. The other overlaps somewhat and then heads west out of downtown. Fares are inexpensive.

There is also a well developed system of buses and express buses. It is time consuming to reach attractions such as Sugar Loaf and Christ the Redeemer by local transit, so tours or taxis are a better alternative in most cases. Although there are many hills and mountains within the city limits, a series of tunnels result in mostly level driving conditions.

The Portuguese entered Guanabara Bay on January 1, 1502 and this is thought to be the origin of the name Rio de Janeiro (January River). Today it is usually simply referred to as Rio. It is located on the Atlantic Ocean in the southeastern part of Brazil. Rio has an urban population of about 12 million people, but is second in size to the Brazilian city of Sao Paulo.  The most common religion is Catholic. Portuguese is the official language, but Spanish is well understood. English speaking tourists will find that English is not commonly spoken outside their hotel.  The people who live in Rio call themselves “cariocas”.