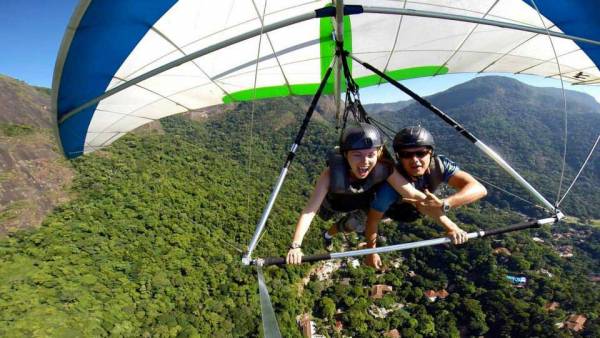 We arrived in Rio from Iguazu Falls. It was summer in the southern hemisphere and the weather was very hot. We stayed at the Olinda Rio Hotel with a view across the street to Copacabana Beach. We did the Christ the Redeemer Tour and the Half Day Sugar Loaf Tour. Then it was time for my daughter, Kathryn, to do what she came for – Hang Gliding Rio.

Before we arrived I spent a lot of time trying to choose a company for Hang Gliding Rio. They all are owned by experienced hang gliders with amazing expertise, but as a parent I was trying to be safe beyond all reason. We chose Just Fly. We made all the arrangements by email. Early on the morning of the flight, an exchange of emails indicated calm weather was causing a delay. Then, eventually the email came which told us to go to the hotel lobby for the pickup. Just Fly arranged the cab to take us on a 20 minute ride to São Conrado Beach. The cab waited a couple hours and took us back afterward, all at a cash rate I could never have negotiated on my own. 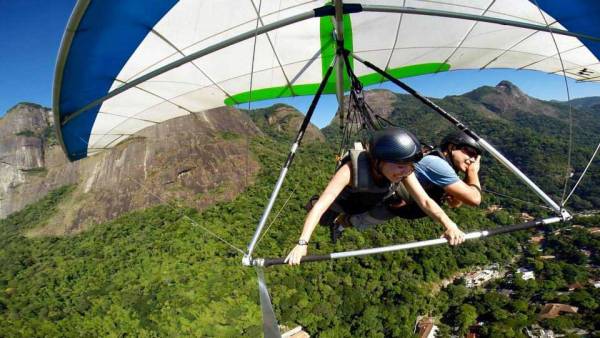 At the beach, staff from Just Fly met us. We paid for the flight in cash. We also paid for the Go Pro pics and movie of the flight. Then we waited about an hour. Kathryn was very quiet. I asked her if she was nervous. She said not as much as for public speaking, so I knew she wasn’t going to chicken out. I was a little nervous because the instructor / pilot wasn’t very old, but I soon realized he was a confident professional. Finally he said conditions were right and they were good to go. 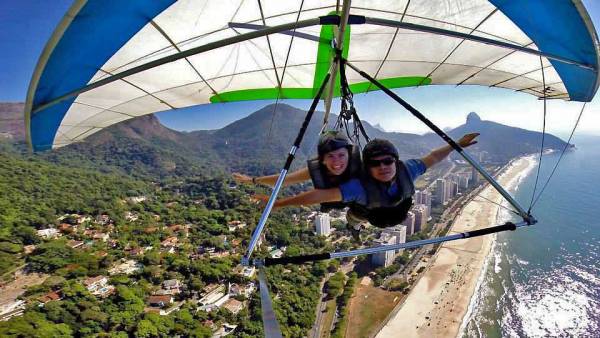 I stayed at the beach. Kathryn drove off in a van up to the Pedra Bonita ramp in Tijuca Park. From the beach I could just make out the small dot as she took off. In the calm air the flight only took just over 10 minutes. They crossed back and forth over the rainforest. Then they took a loop out over the water, like an airplane circling a runway. In this case the runway is the beach. They landed safely and Kathryn was overjoyed by the experience. I’m glad we bought the photos, so I could see how excited she was during the flight. After they processed the photos and video on to a dvd for us, the cab took us back to our hotel. Just Fly is a great choice for Hang Gliding Rio.