One of the great aspects of taking a vacation in Las Vegas is the opportunity to explore the the surrounding desert.  A Death Valley Day Trip from Las Vegas is well worth it, but it’s a long day.  Rent a car in Vegas and head to Death Valley National Park.  We went at the end of April, which was perfect weather with highs approaching 90 degrees.  I’m not sure how people survive Death Valley in summer, as the heat is trapped on the valley floor by the surrounding mountains.  Average highs in summer are 115 F in July with lows near 90F.   In fact, the Furnace Creek Inn closes from early May until early October each year.  So, April is a perfect time for a Death Valley Day Trip from Las Vegas. 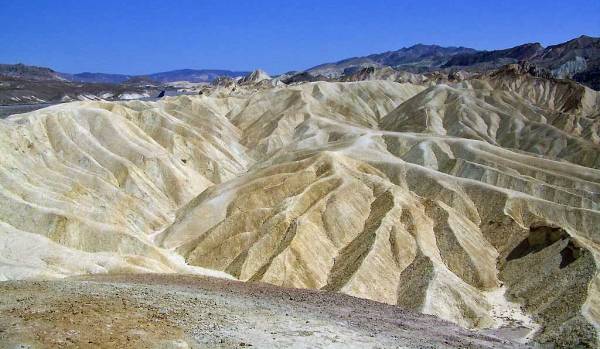 Death Valley was intriguing.  We came in from the east side off of US 95 to US 127 to US 190.  After surviving a 20-minute delay on US 127 for construction and 10 miles of gravel chips without a broken windshield, we arrived at the park.  Our first experience was a drive to the 5,000 foot level to Dantes View in the Amargosa Mountain Range.  Temperatures were in the low 60s, more than 20 degrees cooler than the valley floor.  The altitude at Dantes View made walking noticeably strained.  The view over Death Valley was great, even though it was windy with dust blowing in the valley.  Telescope Peak at 11,000 feet across the way on the Panamint Mountain Range was still covered in snow.  This peak was named by Samuel George in 1861 when he ascended it and noted that the spectacular view was just like having a telescope.

From Dantes View we drove back down to the valley floor.  We stopped at Zabriskie Point along the way.  Zabriskie Point is where borax was mined and carried out 165 miles to Mojave by 20 mule teams from the years 1883 -1889.  I still remember the 20 mule team borax soap ads from my childhood in the 1950s.  That was a very successful advertising campaign, which was unrelated to the original mining. 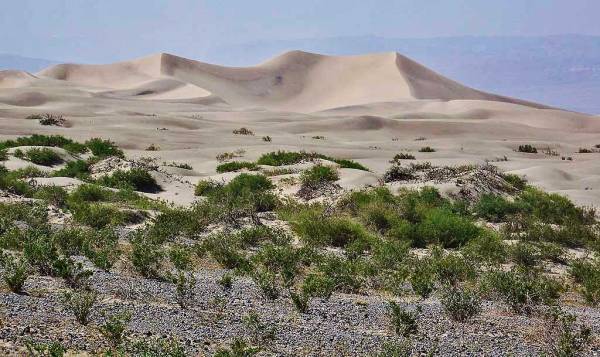 Furnace Creek is on the valley floor and the temperature was noticeably higher. We wandered through the Furnace Creek Inn, which is now called (the Oasis at Death Valley). The hotel is unusual hotel, because of its thick concrete walls which keep it cool.  A tunnel from the basement leads to the visitor parking lot.  The thick concrete in the hotel kept it very cool that day despite the 90 degree April weather. Unfortunately there was no place to have an appetizer and look out over the lovely pool to the valley. Also, there was a legal required notice about a health hazard in the building that visitors could ask for further information about. The other accommodation at Furnace Creek was at the Ranch nearby. Several campgrounds are available too, but I fail to understand why anyone would camp here at any time of year. 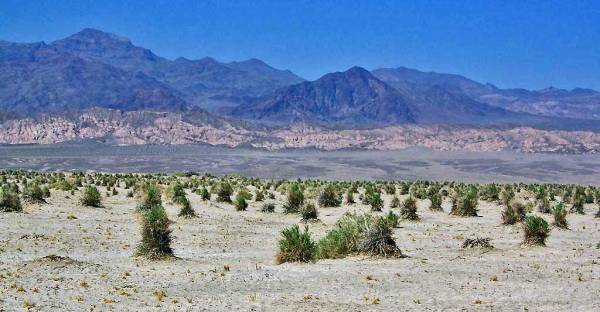 Next we headed north to the Mesquite Flats Sand Dunes and the Devil’s Cornfield near Stovepipe Wells.  These formations are close together and were worth the extra time to reach them.  Then we turned around back to Furnace Creek.  While we were in Furnace Creek, I noticed that the front left tire on the rental car was low, so I filled it up.  Luckily, it held the rest of the day, because after Furnace Creek we traveled 75 miles with no services, no side roads, no houses, no people and only 3 cars coming our way.  I thought I might end up reliving a childhood experience of sleeping by the roadside in Death Valley, because our car over heated then. 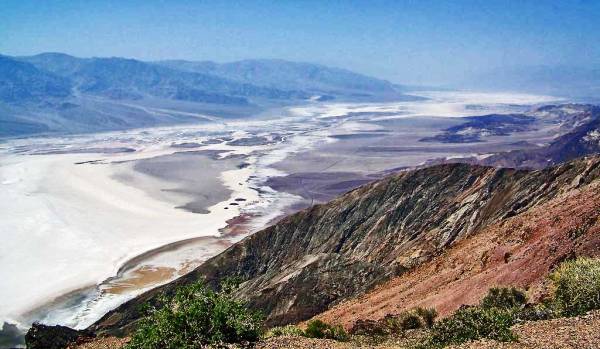 Badwater was my favorite part of the Death Valley experience. It’s a few miles south of Furnace Creek. Badwater is an area where evaporation creates a giant salt flat. Badwater touches right up against the Amargosa Mountain chain on Death Valley’s eastern edge. You can see the salt crystals forming in small pools and you can walk out on the salt flat. When you look back at the mountains, there is a sea level marker looming far above you on the hillside. You get a sensation of being 240 feet underneath the sea. The most striking feature of Badwater is the silence though. There is nothing around to make a sound except your own steps and breathing. It’s the quietest experience I’ve ever had and it made me want to stay even longer.

We returned to Vegas by driving the entire length of the valley southward to Shoshone. Taking the valley route south was scenic and much better than US95, though it did take a little longer. By the time we were done, we had traveled for 8 hours and put 400 miles on the rental car. Luckily the Planet Hollywood buffet was ready for us on our return. 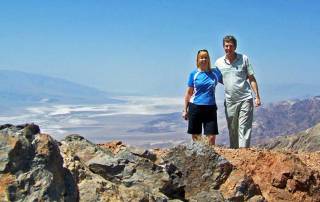 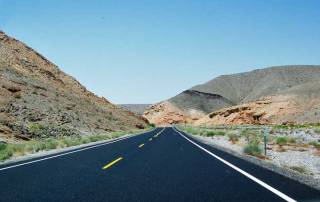 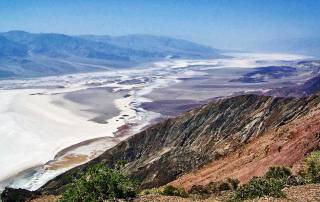 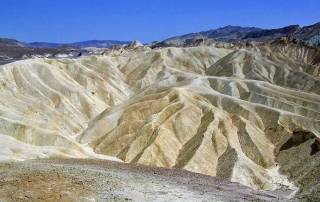 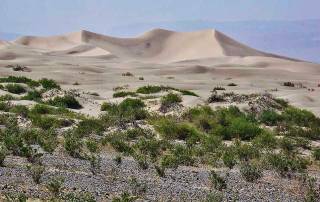 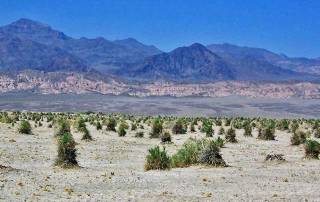 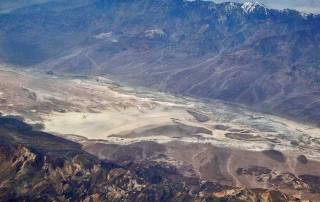