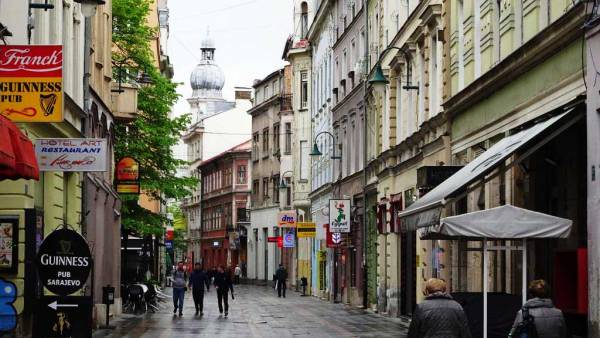 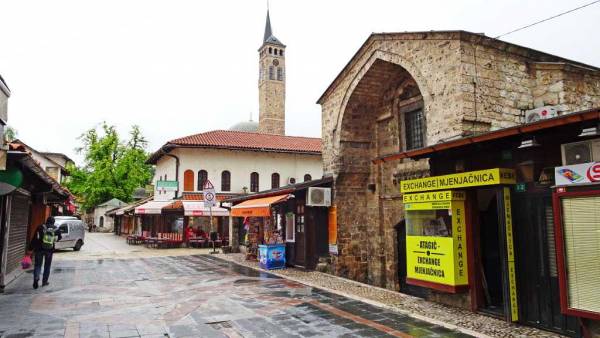 Our first stop on our Bosnia & Herzegovina Tour was Sarajevo. I’d seen movies about reporters trapped in the Holiday Inn Sarajevo by sniper fire during the Bosnian War. I’d also seen videos of mortar shelling during the siege of Sarajevo. Being in Sarajevo turned history into reality for me. You can still see mortar shelling on apartment building walls. Some entire buildings are still empty shells 20 years later. You can still see mortar impacts on the streets. People have painted the mortar impacts with red paint to create a “Sarajevo Rose”. You can see a Sarajevo Rose in front of the Sarajevo Sacred Heart Cathedral. 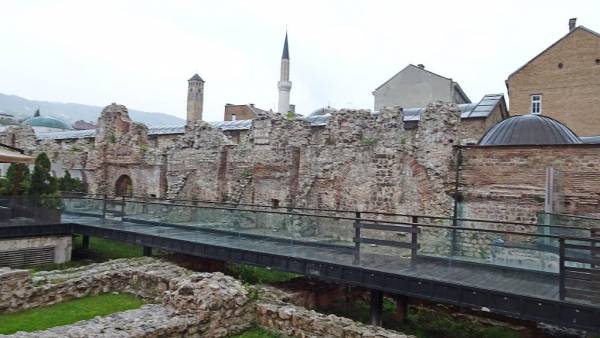 Our Gate1 tour stayed at the Hotel Europe. This hotel was attacked in the days before the beginning of World War I. Most of the hotel had to be rebuilt, but some of the Austrian exterior design has survived. The Hotel Europe sits at the intersection of the Muslim and Christian sections of Sarajevo. The Ottoman ruins of the Tašlihan are directly beside the Hotel Europe. The Gazi Husrev-beg’s Bezistan building holds a regular shopping bazaar on the opposite side of the Tašlihan. 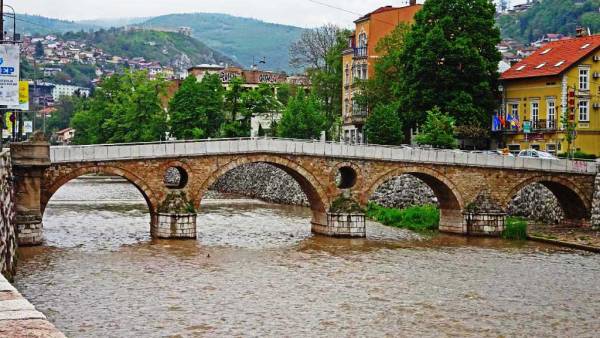 One of the most historical locations in Sarajevo is the Latin Bridge, which is only a block from the Hotel Europe. A Serb assassinated the Archduke Franz Ferdinand of Austria at the intersection on the west end of the Latin Bridge in 1914. Franz Ferdinand was heir to the throne of the Austrian empire. Strong alliances quickly escalated the event to become World War I. I’d read about this in my childhood history lessons, but standing in the spot where World War I began creates an impression that can never be matched by a history lesson. The losses suffered by Germany in World War I were also a factor leading to Hitler’s popularity, which ultimately led to World War II. It’s hard to believe that so much of European history was influenced by this small town corner in Sarajevo. 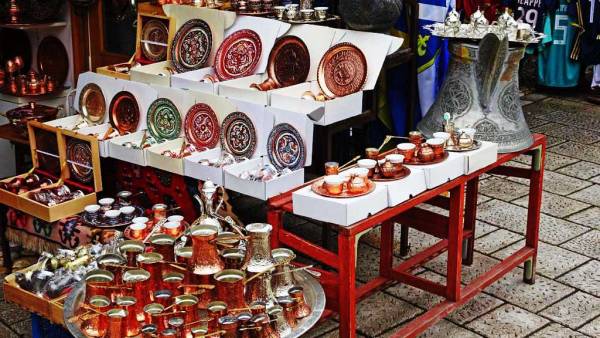 The next morning we had a short walking tour of Sarajevo. We started at the Taslihan Ottoman Ruins beside the Hotel Europe & the East vs West marker for the Sarajevo Meeting of Cultures on the pedestrian street beside it. Next we visited the Latin Bridge known as the place where World War II started. We walked past a small statue of electrical engineer Nikola Tesla. I finally made the connection between Tesla, who developed alternating current electricity, and Tesla electric cars developed by Elon Musk.

We continued our Sarajevo Walking Tour by visiting the Sarajevo Cathedral (Sacred Heart Cathedral), which has a Sarajevo Rose painted on the square in front of the church. 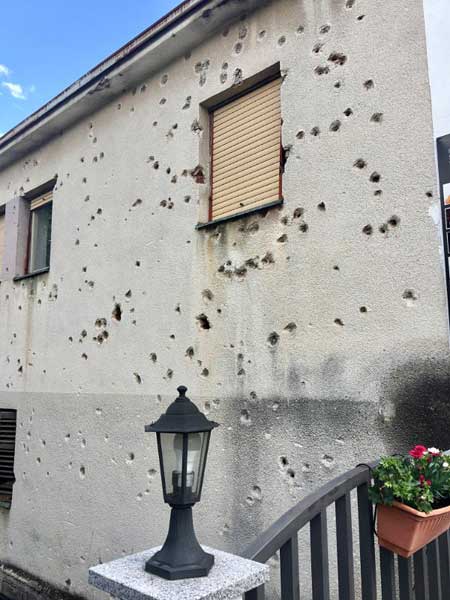 Next we heeded to the Muslim quarter and the Gazi Husrev-beg Mosque. Our guide, Layla was excellent at explaining Muslim religion to our mainly Christian tour group. She did a great job of addressing Sharia law to US tourists who clearly had learned to fear it. After the Gazi Husrev-beg Mosque Mosque we took a quick look at the Morica Han Caravanserai, which originally provided lodging to traders on the Silk Road. Then we wandered through the Muslim Quarter bazaar or Bascarsija, which mainly sold beautiful copper Bosnian coffee sets. My granddaughter now enjoys many hours pouring coffee, tea and water between the copper pieces. Our last stop on the Sarajevo walking tour was a visit to the Muslim style architecture of the Sarajevo City Hall.

Want to see even more pics of Sarajevo? Visit Take That Vacation – Sarajevo. 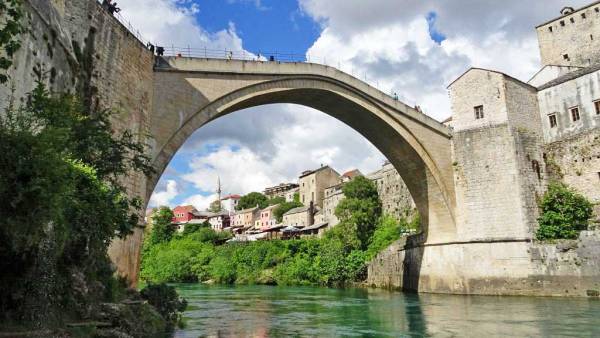 After our Sarajevo Walking Tour, we returned to the Gate1 bus and headed to Mostar. As we descended from the mountains toward the coast, the temperatures and the skies improved. Mostar was fairly busy with tourists. Most tour groups arrive on day trips from Dubrovnik. Everyone comes to Mostar to see the famous Stari Most bridge. The original Stari Most was a beautiful single arch 1500s Ottoman bridge over the Neretva River. Serbians blew up the Stari Most Old Bridge in November of 1993. In 2004 UNESCO oversaw the rebuilding of the Stari Most bridge in the same design, using original stonework retrieved from the Neretva River. Locals will jump off the bridge whenever they collect enough money from the crowds of tourists. See more pics of Mostar at Take That Vacation – Mostar. 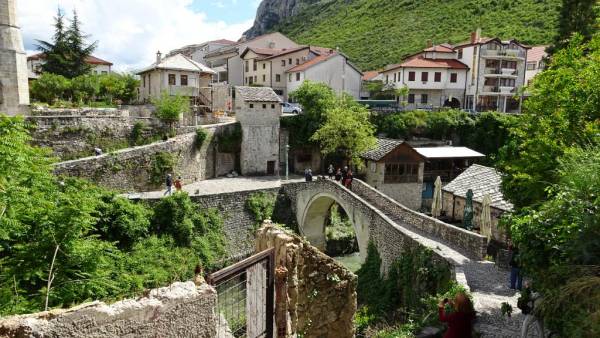 After Mostar we made an unusual trip along isolated back roads to get to Dubrovnik. Check a map and you will see why. By doing so, we only made one border crossing instead of three. How strange to realize that Dubrovnik in Croatia is cut off from the rest of Croatia by a small coastal strip of Bosnia & Herzegovina. The Croatian government is planning to solve this border problem by building two island bridges that will then bypass Bosnia & Herzegovina. Read about the cities we visited on our Croatia Tour with Gate1 Travel here. 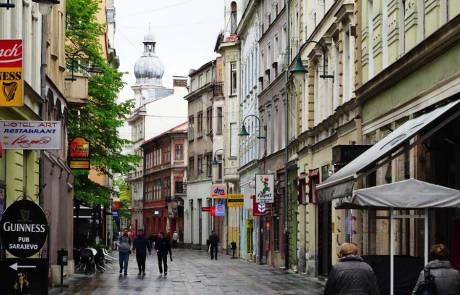 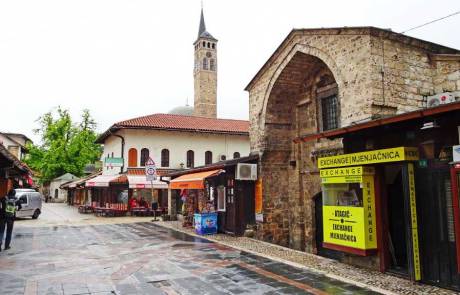 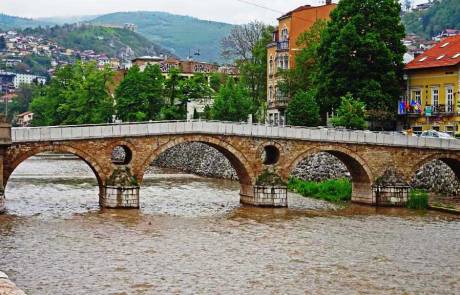 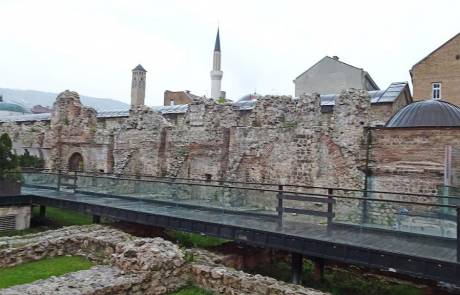 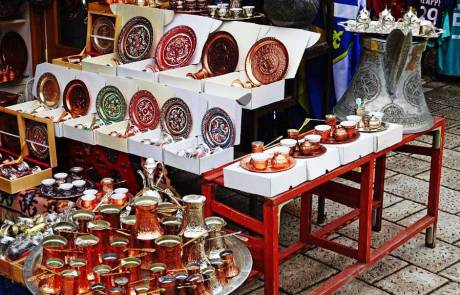 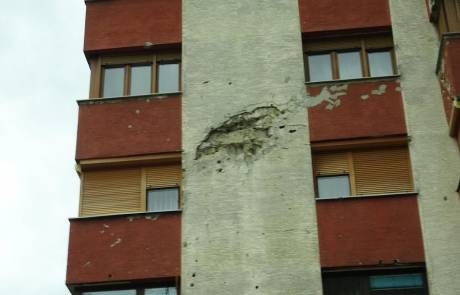 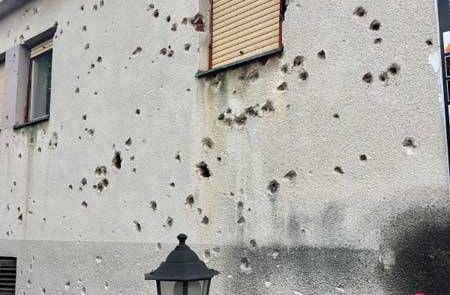 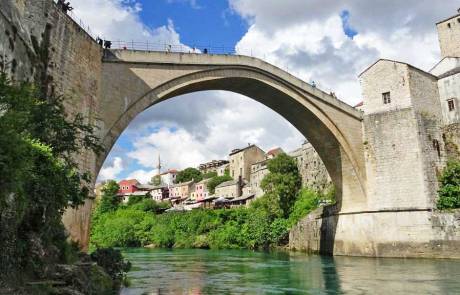 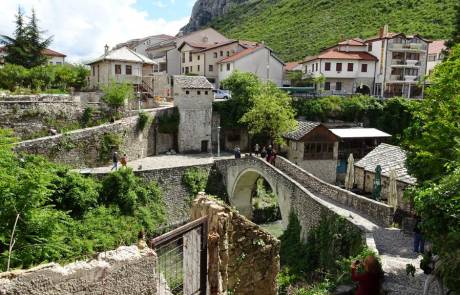