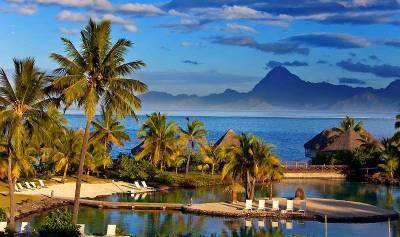 Boulevard de la Reine Pomare IV rings the Papeete Harbour and provides easy walking access to many places. The Pearl Museum (Muse de la Perle), the Paofai Gardens, the Church of Paofai, Bougainville Park, the Stuart Hotel where Matisse painted the harbor, the Papeete Town Hall and the Papeete Market are located on the boulevard. 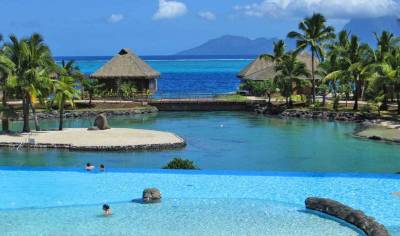 Vaima Center occupies the boulevard too with upscale shops, restaurants and cafes. The Notre Dame Cathedral of Papeete is located just behind the center, as is a fresco of the HMS Bounty honoring the author of Mutiny on the Bounty. 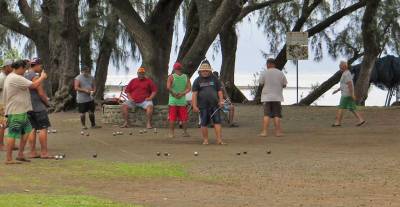 Visit Tahiti – Take to the Water

Visit Point Venus off Matavai Bay is the most northerly point of Tahiti. In 1769 Captain Cook observed the transit of Venus here. Point Venus has a black sand beach, because it is not protected by the barrier reef that encircles much of the island. The only lighthouse in Tahiti is located on the point. Nearby there is a monument to the 1788 visit of the HMS Bounty, including a plaque with the names of every crew member on it. There is also a display commemorating the efforts of the London Missionary Society in the islands of the South Pacific. 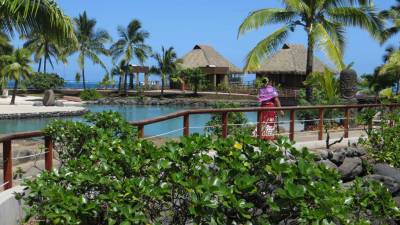 Savor the Tastes of Tahiti 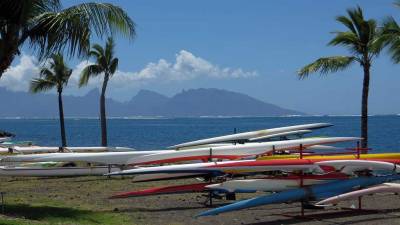 With the only major airport among the French Polynesian islands located a few miles from Papeete, Tahiti is the gateway for tourism in French Polynesia. Flights from Faa’a Airport (PPT) connect on a regular basis to Los Angeles, Paris, Honolulu, Auckland, Tokyo, Easter Island and Noumea. Air Tahiti Nui is the major international carrier and often affiliates with other airlines. Moorea is a 10-minute flight or a 30-minute ride by high-speed catamaran. Bora Bora can be reached on a one hour flight.

Expect very little variation in temperatures throughout the year. Average highs will be about 85 F (30 C) and lows will average 75 F (23 C). The rainy season extends from November to April. Temperatures can be slightly higher during this period, because this area of French Polynesia is south of the equator. June through October are the popular tourists months, because they are drier. It can rain any time of year though and global warming influences of El Nino bring inconsistency to weather forecasting. September is likely the best month to visit Tahiti.

For those with luggage, a taxi cab or an airport / Papeete shuttle are the best alternatives to reach downtown Papeete and the cruise terminal. Cabs are fairly expensive with a high entry price before the mileage charge even starts. Car rentals are easy to obtain. Tahiti is like two circular islands joined together. Tahiti Nui is the larger section and Papeete is located on it. A paved coastal road circles completely around it. The Circle Island Tour covers 72 miles (114 km). 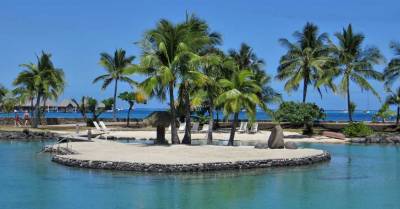 Waiting for that Late Night Flight

Our favorite thing to do while waiting for a late night flight is to take a cab to the InterContinental Tahiti Resort & Spa for dinner. This hotel is the best one on the island. The ambience and views are fabulous.

Faa’a Airport (PPT) offers luggage storage on the main concourse, which is an excellent option for those waiting all day for the standard midnight flight to Los Angeles. Store your baggage after leaving the hotel or cruise ship and spend the day in Papeete. Take an airport / Papeete shuttle or a local bus, called Le Truck, since you won’t have bags to bother with. Fares on Le Truck fares are extremely low, but be prepared for irregular service schedules and no service after 5 pm. 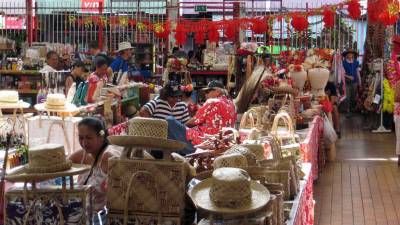 Famous visitors to Tahiti in the past include Captain Cook in 1769, Captain Bligh aboard the Bounty in 1778 and Charles Darwin aboard the HMS Beagle in 1835. Today most visitors are usually celebrating a honeymoon or anniversary. Tahiti’s larger size makes it a center for tourism and resorts, but the smaller islands have basically the same features and attractions in a setting that has fewer tourists and fewer permanent inhabitants.

Tahiti is also sometimes referred to as the Queen of the Pacific. Tahiti is the largest and most populated island of the Society Islands and French Polynesia.  About 125,000 live here. The island is less than 30 mi (50 km) at its widest point. Most of the people are Polynesians, but French is the official language.  Many people speak Tahitian. Papeete is the capital of Tahiti and has the largest concentration of inhabitants on the island. The name Papeete seems like it is French because of the “ete” ending, but it is Tahitian. Locals pronounce all three “e’s” in the name.