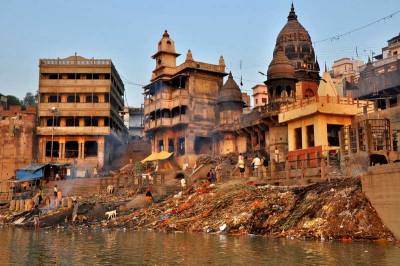 Those who visit Varanasi can see at least 84 ghats along the Ganges River. The ghats each have steps down to the Ganges River. Ghats are used by Hindus for ceremonies, bathing, washing and cremations. If a person dies in this section of the Ganges, they are said to reach eternity immediately instead of being reincarnated. Hindus honor the river at sunrise or sunset by bathing in it. Tourists often watch the sunrise from boats on the Ganges and then see the crowds of Hindus bathing and washing clothes. 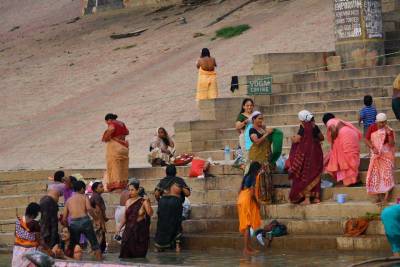 Hindus worship by bathing, pouring river water over their head and hands, floating flowers or lit candles on the river, chanting and doing yoga. Some will offer river water to the rising sun and Lord Shiva. After sunrise a steady stream of cremations take place at the many ghats along the Ganges. Tourists should be very respectful. There’s no need to take photos of cremations. 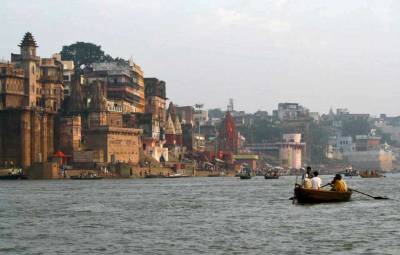 The Dashashwamedh Ghat is likely the most popular ghat in Varanasi. Each night there is a Puja Worship Ceremony at the Dashashwamedh Ghat. At the Puja Ceremony, Brahmins honor Lord Shiva and the River with Aarti candle ceremonies call. They sound conch shells, burn incense and ring bells. Flowers and candles may be floated down the river. Each night, many people watch from boats packed closely together along the shore.

Other ghats along the Ganges here include Manikarnika Ghat, Harischandra Ghat, Tulsi Ghat, Kedar Ghat and Assi Ghat. Some ghats are mainly for cremations while others are for bathing and washing. 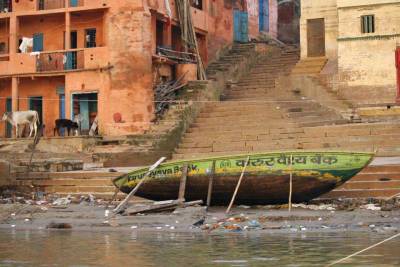 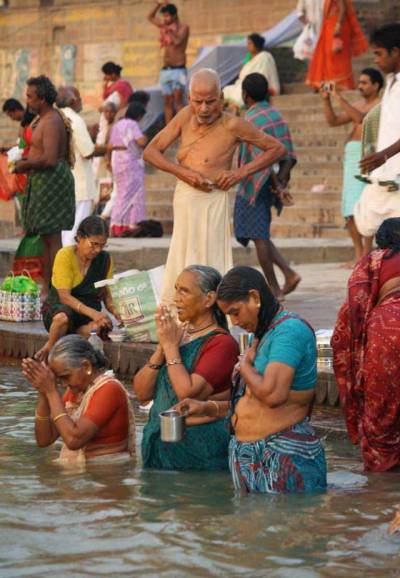 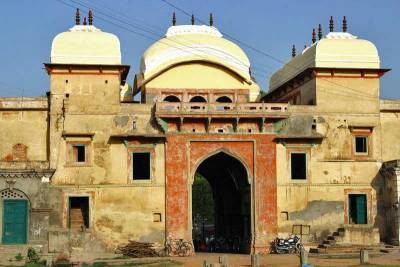 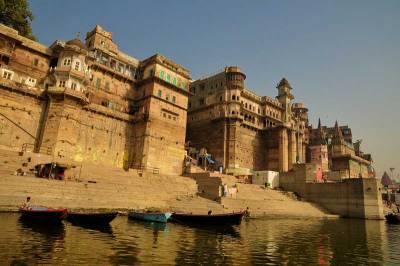 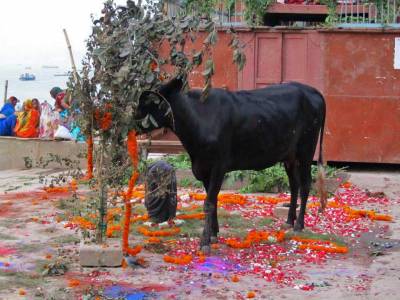 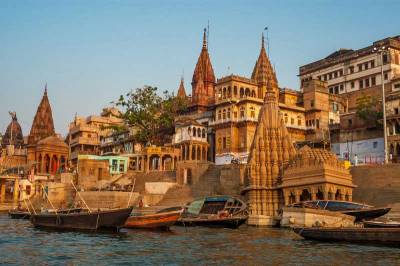 There are numerous Hindu, Buddhist and Jainist religious festivals throughout the year in Varanasi. The full moon frequently determines festival dates, so events happen on slightly different dates each year. The crowds might accidentally sweep you away with them, so be careful if you choose to participate. 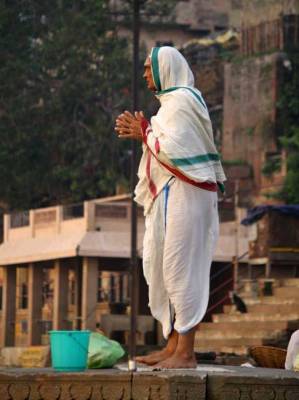 Diwali (or Dev Deepavali) is the Festival of Light. Diwali happens in late October or early November, depending on the full moon. During Diwali, candles in earthen lamps (diyas) are everywhere in the city. The ghats are illuminated with candles too, as part of a ceremony called Aarti Ganga. On the full moon, Hindus light more than a million candles in rows on the ghats. People set candles afloat in the Ganges River too. The Ganges is showered with fireworks all night long. 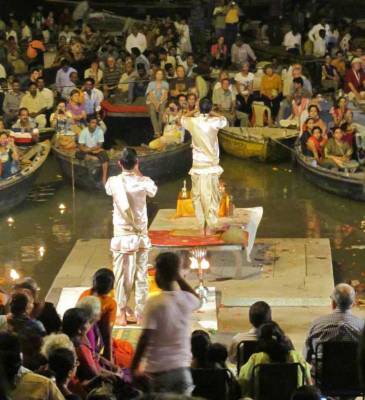 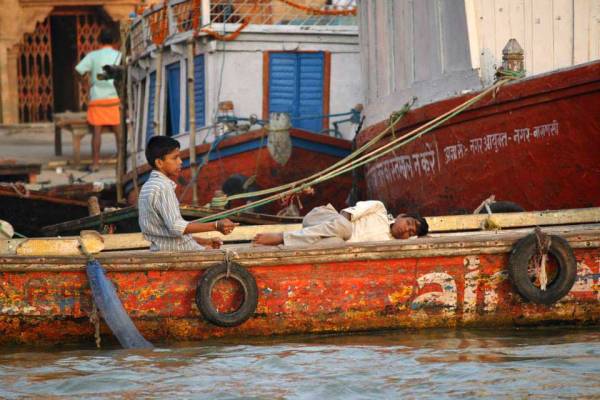 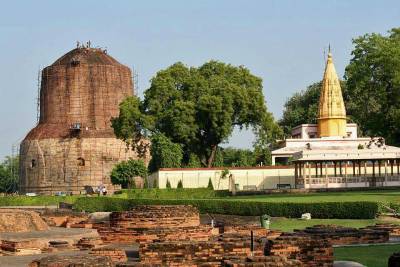 Travel 10 minutes north from Varanasi to Sarnath. Visit Deer Park, the popular pilgrimage destination where the Buddha preached his first sermon. Buddha attained enlightenment at the Bodhi Tree near the Mulagandhakuti Vihara Buddhist temple in the park. See the ruins of the monastery at Dhamek Stupa and the Lion Capital of Ashoka Pillar in the Sarnath Archaeological Museum. The pillar has become the inspiration for the national emblem of India. Also visit the Chaukhahdi Stupa close to the Dhamek Stupa in Sarnath. 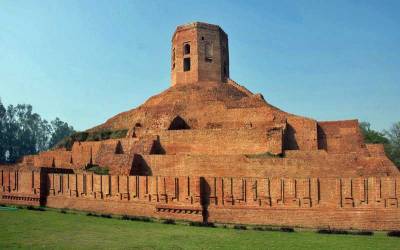 Savor the Tastes of Varanasi 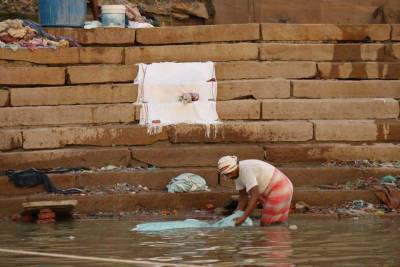 Most tourists fly to get to Varanasi in northern India. Lal Bahadur Shastri International Airport is about 20 minutes by cab from the city center. Major roads and train service connects Varanasi nicely to the rest of India. The Varanasi Junction Railway Station is huge and is the city’s main train station. You can get to Varanasi from the Taj Mahal in about 9 hours by vehicle. If you are touring India, consider a tour that also includes Kathmandu in Nepal when you visit Varanasi.

The Varanasi weather is humid and subtropical. Summer runs from April through October, with average highs above 31 C (87 F) and average lows around 25 C (76 F). Rainfall is heavy through the months of July, August and September. During the winter months from November to February, rainfall is very low. Average highs in winter are 22 C (68 F) and average lows are around 12 C (55 F).

November or February are likely the best months to visit Varanasi for good weather, but the timing of a great variety of religious ceremonies will likely determine when you visit Varanasi.

About 1.5 million people live in Varanasi in northern India along the Ganges River. The city is considered to be the spiritual capital of India and Hindus prefer to be cremated in Varanasi. People also call the city by the name Kashi, Benares or Banaras. Another name for Varanasi is Shiv Nagari, which means the City of Lord Shiva. Lord Shiva is one of the most important gods of Hinduism and Varanasi is considered to be Shiva’s home. The city contains more than 10,000 temples and is a pilgrimage site for Hindus, Buddhists and Jainists. Although Hinduism is the main religion for permanent residents of Varanasi, there is also a large Muslim component, resulting from Turkish Muslim rule of the city in the 1100’s.