Tours that visit Myanmar start at the international airport in Yangon. Things to see and do in Yangon start with the fabulous Swedagon Pagoda.  Other standard sights include the Reclining Buddha, Karaweik Palace at Kandawgyi Lake, the Sule Pagoda and the Tooth Relic Pagoda. Read about all the things to see and do when you visit Yangon by following this link. From Yangon, tours usually take Myanmar Railways to Bagan. You can read about Bagan below on this page.

The next stop after Bagan when you visit Myanmar is Mandalay.  Most tours will take an Irrawaddy River cruise to reach Mandalay. Tours typically visit the Mandalay Palace and Fort, Mandalay Hill, U Bein Bridge and the Mingun Pagoda. Read about all the things to see and do when you visit Mandalay by following this link.

From Mandalay, tours usually travel south to Pindaya Caves and Inle Lake. You can read more about these destinations below.

Check out our video of Shwedagon Pagoda, the temple plains of Bagan, young children with Thanaka face painting, Inle Lake and Pindaya Cave.

From Yangon most tours travel on Myanmar Railways to reach. You can also get to Bagan by air. The town of Bagan was once known as Pagan. Bagan was the capital of the Kingdom of Pagan about 1,000 years ago. The Kingdom of Pagan built thousands of pagodas (temples, stupas, payas) during that period. Those temples are the main tourist draw for Bagan. The city is between Mandalay and Yangon on the Irrawaddy River.

In the evening, people head to the Bagan Viewing Tower to watch the sunset as it silhouettes hundreds of pagodas. The plains of Bagan make it easy to get a great view from any of its pagodas. There are far too many pagodas to name, but a few of the more popular ones are: Ananda Temple, Shwezigon Pagoda, Mahabodhi Temple, Mya Thein Tan and Sulamani Paya. 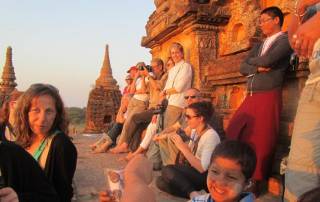 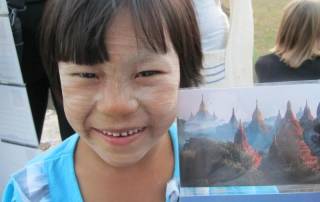 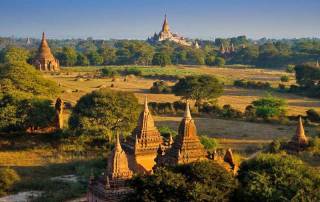 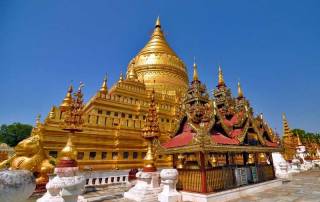 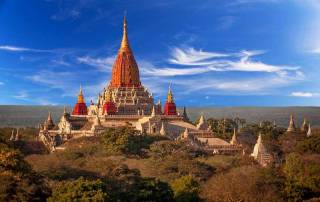 Most organized tours that visit Myanmar include a stop at Inle Lake. Inle Lake is the second largest freshwater lake in Myanmar. The lake is in the southeast of Mandalay, just south of Pindaya Caves. Less than 100,000 people live in the 4 towns around Inle Lake. The lake has many small boats. The pic that tourists look for is a fisherman steering their boats in an unusual manner.  The fisherman stand on one leg and wrap their other leg around the rudder to steer. Then they use both hands to throw their fishing net. Apparently this method originated because it allows for better sight of fish in the water.

Things to see and do in Inle Lake include: 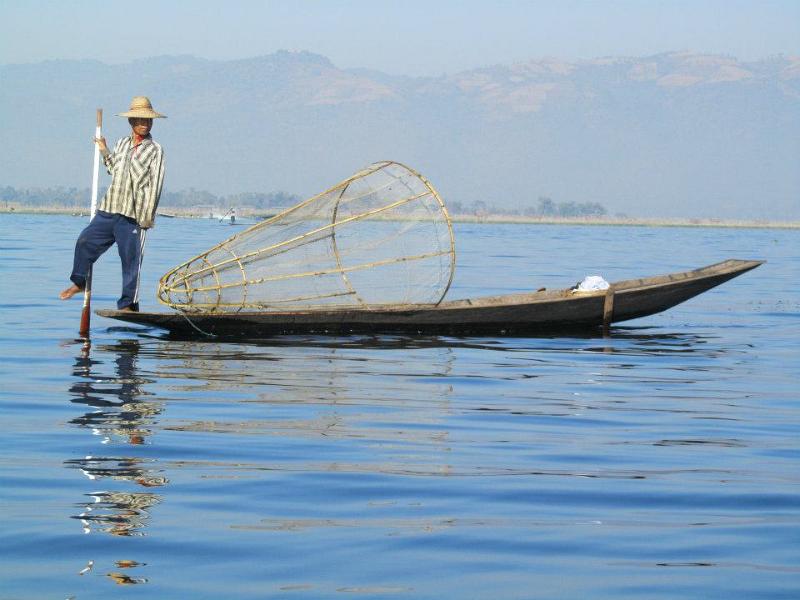 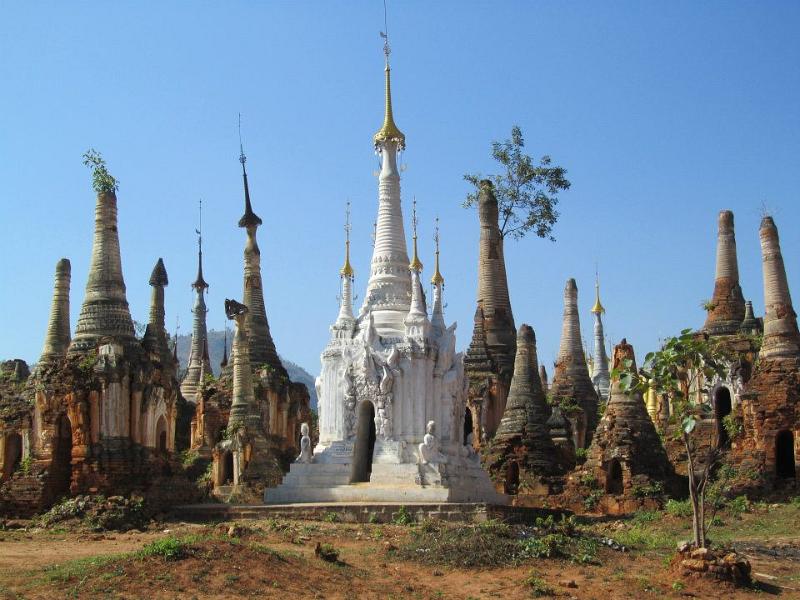 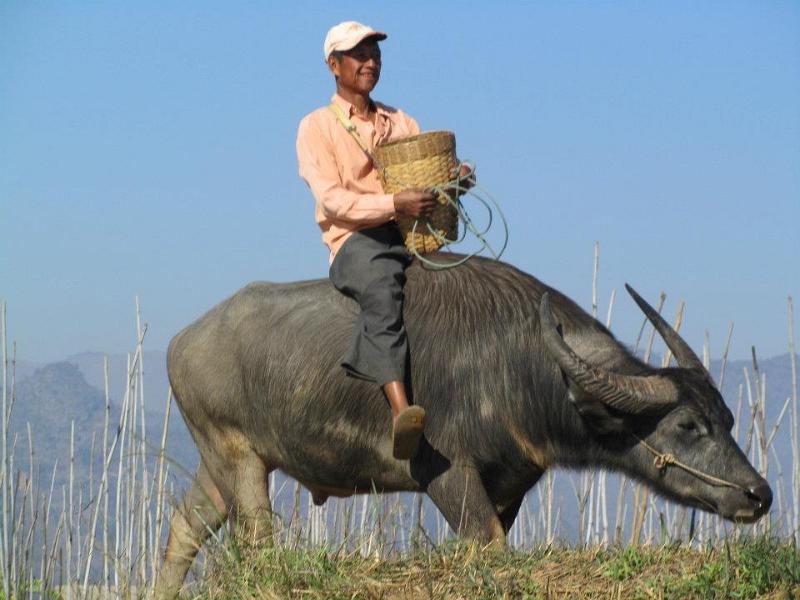 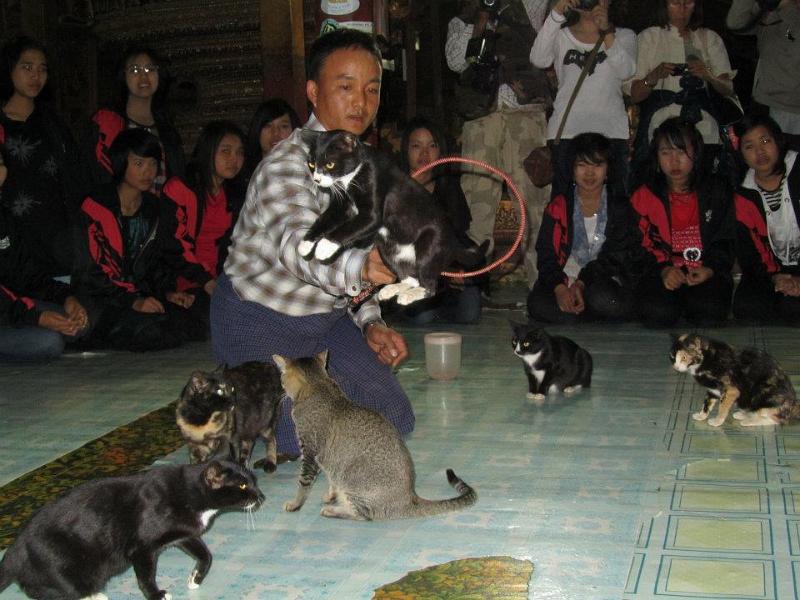 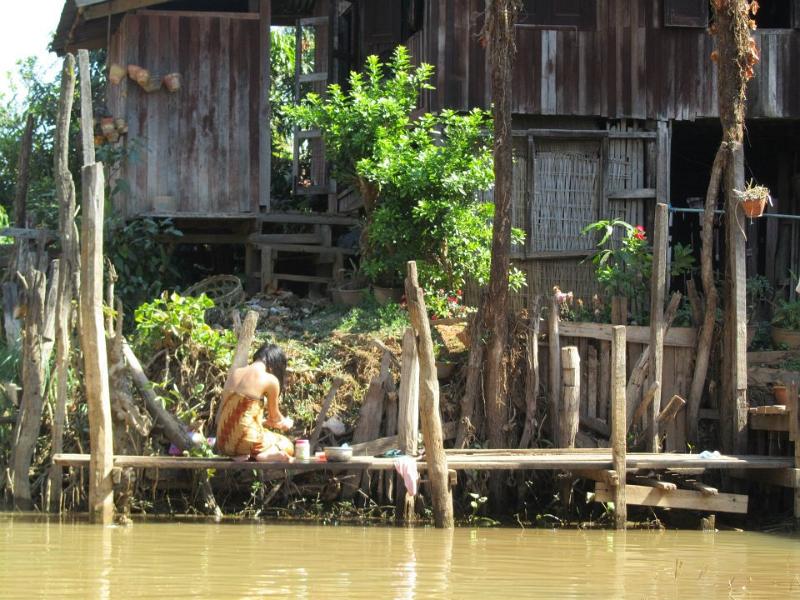 Most organized tours that visit Myanmar travel south to Pindaya from Mandalay.  Things to see and do in Pindaya include: 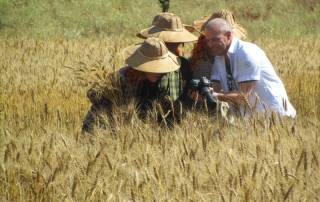 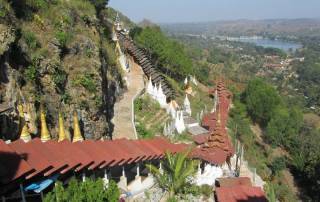 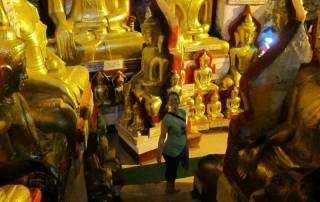 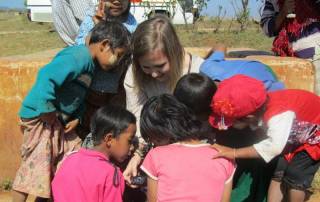 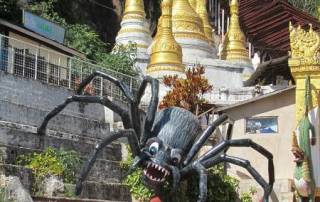 Temperatures get extremely hot in Myanmar in the spring. From June to August temperatures are cooler, because of heavy rainfall. So, December and January get our vote as the best time of year to visit Myanmar.

You need a tourist visa to enter Myanmar. You must get your visa before you arrive in the country. A photo, a letter of reference and supporting documentation to needed complete your visa requirements. Visa application information and forms are available from the Myanmar Government Website. Check your specific country at VisaHQ. For a list of exempt countries, visit Project Visa.

It is best to travel with US dollars in cash when visiting Myanmar. There are no ATMs. Vendors rarely accept credit cards and travelers checks. Change a small amount of US$ to kyats for local spending money.

When you Visit Myanmar, bring along every electrical adapter you can think of. Electrical sockets in use include North American two prongs, British three prongs Type G, European Type D and even Australian Type I.

The Pagan Kingdom in 1057AD established Buddhism as the main religion for Myanmar. The many temples in Myanmar show the influence of Buddhism over the centuries. Temples are called payas and pahtos, which are Burmese words meaning pagoda and temple. Pagodas are not just symbols of the past, as many new ones continue to be constructed in present times.

Spelling of Myanmar sites and cities is a challenge, because difficulties with pronunciation create variations in names. Many places have several spellings. For example, the Irrawaddy River is also called the Ayeyarwady River. Yangon is the same as Rangoon. Mahamuni Paya is the same as Maha Myat Muni Pagoda. Get used to seeing the word “paya” for a pagoda or temple.

Burma became the Republic of the Union of Myanmar in 1989, but there has been significant protest over the name change. It is still common to refer to the country as Burma. The name Burma has been in use since the 1800s when the British exercised control. Myanmar has borders with India, Bangladesh, China, Laos and Thailand. The Myanmar coastline covers the Bay of Bengal and the Andaman Sea.

Naypyidaw is the capital of Myanmar, while Yangon is its largest city. About 60 million people live in Myanmar. Myanmar has received international attention for the persecution of Rohingya Muslims.