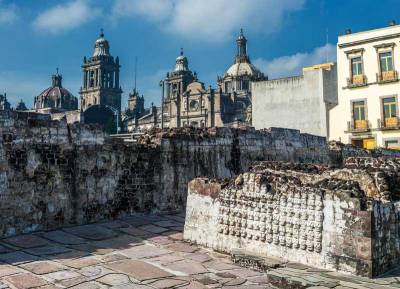 Most people who visit Mexico City start at the Zócalo.  The Zócalo is the main downtown public square and is also known as the Plaza de la Constitucion.  On the Zocalo you will find the Metropolitan Cathedral and the National Palace.  Neither charges an admission fee.   The central square and catholic church were built over top of native Aztec buildings.  In 1978 the Templo Mayor archaeological site was discovered on the northeast edge of the Zócalo.  The Templo Mayor contains a museum and many discoveries of Aztec civilization.  The Merchant’s Portals is on the west side of the square.  Mexico City Hall is on the south side of the Zócalo. 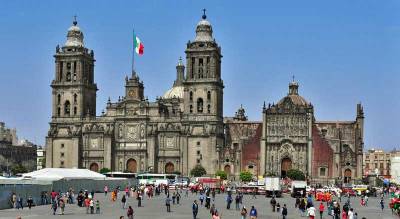 From the Zócalo it’s only a short walk to the Fine Arts Palace where you can see performances by the Ballet Folklorico de México.  Also visit the National Museum of Art, City Theater, Alameda Park & the Monument to Benito Juarez, Plaza Garibaldi and the Diego Rivera Mural Museum. 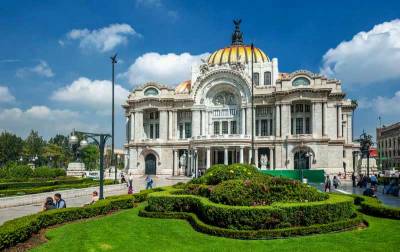 Besides the National Museum of Anthropology, other museums in the park include the Museum of Modern Art, the Museo Tamayo with works of Picasso & Warhol, the Natural History Museum, the Papalote Museo del Nino and the Auditoria Nacional for art and culture. 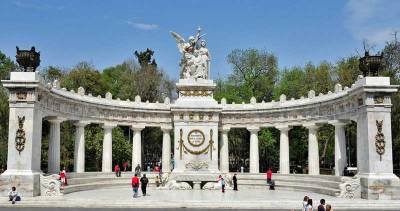 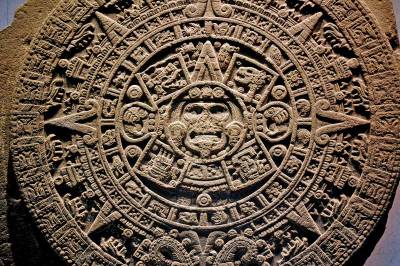 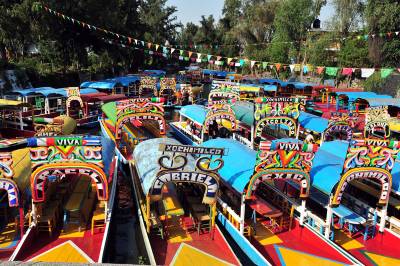 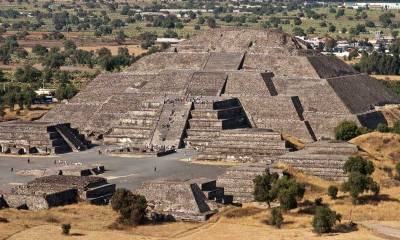 Pyramid of the Moon, Teotihuacan, © Can Stock / dimol

Savor the Tastes of Mexico City 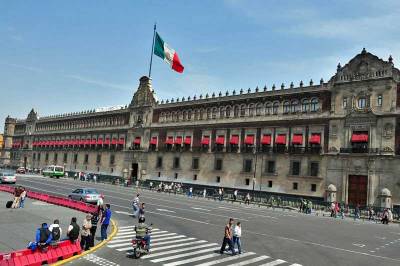 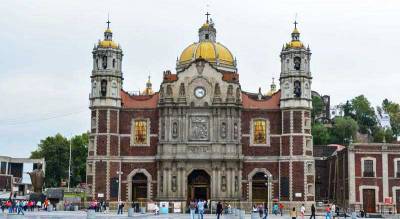 Mexico City weather is moderated by the high altitude of the city.  The Mexico City weather is warm in summer and mild in winter.  Expect summer highs of about 75 F (24 C) and average lows of 55 F (12 C).  Winter temperatures are only a few degrees lower than in summer.  July through October are the rainiest months, however rainfall can happen for brief periods almost any day.  March and April are likely the best time to visit Mexico City for good weather.

Get to Mexico City

Locals frequently travel in “peseros” which are small buses that pick up passengers at numerous locations.  The peseros travel travel along set routes for a fare proportional to the distance travelled.  This is a common local transportation method in Mexico.  In the Riviera Maya, they call these colectivos.

If you aren’t up for the adventure of a trip in a pesero, try Turbis tour buses.  Turbis is a great way to easily move between the Zocalo and Chapultepec Park, as well as visiting other tourist attractions around the city.

Mexico City is the capital of Mexico.  More than 20 million people live there.  The city sits in a high altitude valley at an elevation of roughly 7,000 feet.  Mexico City is sometimes called México DF in Spanish, which refers to the federal district.  The Aztec city of Tenochtitlan was already at the current day site of Mexico City when Hernan Cortes and the Spanish conquistadors arrived in 1521.   When the conquistadors arrived, Tenochtitlan was on an island in a lake, but today the lake is gone.  The Floating Gardens at Xochimilco are all that remains of the lake and waterways.