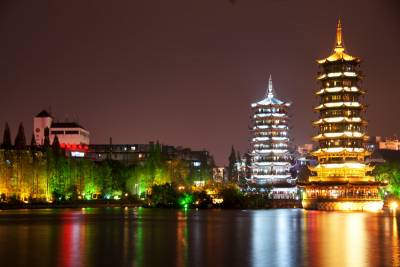 The main reason most people come to visit Guilin is for a Li River Cruise.  Take a tour boat downstream from Guilin for 50 miles to Yangshuo.  The Li River winds its way through unusual limestone karst formations that are the inspiration of many Chinese drawings.  The peaks have vertical sides and rounded tops, making for scenery that is unique.  Watch for water buffalo, rice paddies and fisherman on bamboo rafts using cormorants to fish for them. 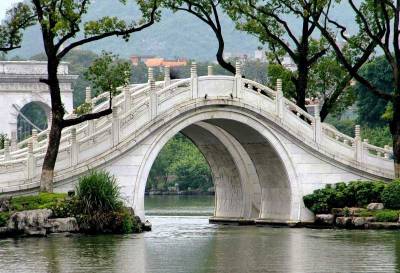 Li River Cruising is typically done with large barges that have observation decks on the top.  A Li River Cruise takes 2 hours downstream to Yangshuo.  Tours typically allow some time to visit Yangshuo before returning to Guilin by bus.  Floating on bamboo rafts is done starting at Yangshuo, so make sure you allow enough time if you want to do this too. 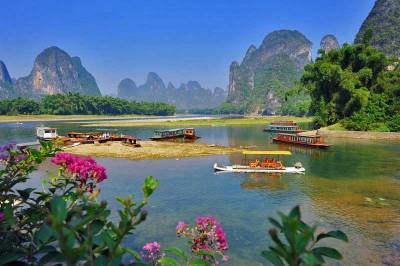 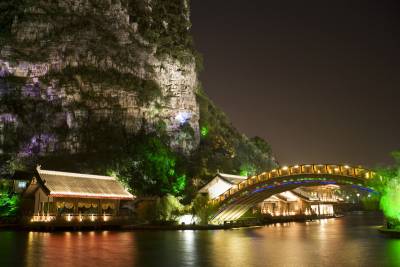 Elephant Trunk Hill is a popular destination for those who visit Guilin. The rock formation of this hill resembles an elephant dipping its trunk into the waters of the river below.  The best way to see Elephant Trunk Hill is on a local Guilin boat tour.  The Elephant Trunk is at the junction of the Li and Peach Blossom Rivers.  Water Moon Cave is between the trunk and the elephant legs, but it isn’t really a cave.  The cave is actually a hole that creates a great effect when the moon shines through it.  Down river from Elephant Trunk Hill you will find Pagoda Hill and Tunnel Hill.  Tunnel Hill includes a natural tunnel through the hill. 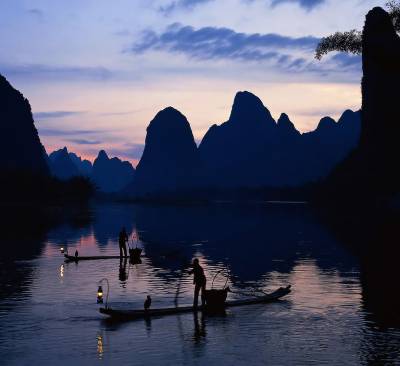 Take a Cormorant Fishing Tour on the river in Guilin.  Spend nearly an hour on a boat drifting beside cormorant fishermen on their bamboo rafts.  Cormorant birds are trained to catch fish.  Ropes around their necks prevent the cormorants from swallowing the fish.  That way the fisherman can keep the catch instead.  The cormorants are rewarded with small fish for catching big ones. 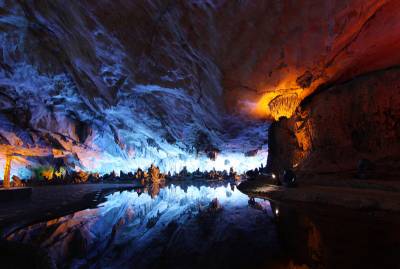 Reed Flute Cave are a popular destination just outside town at Guangming Hill.  These limestone caves have colorful lighting that has been added inside the cavern.  The name reed flute refers to vegetation growing outside the cave.

The city of Guilin has a number of caves that you can visit during your stay:

Folding Brocade Hill is formed from limestone that is folded like a brocade to form this hill.  Enjoy views of the city and historical stone carvings.  The site includes the Diecai Pavilion, Wind Cave and Cloud-Catching Pavilion.

Wave-Subduing Hill  is at Fubo Hill in the city.  Visit the Pearl-Returning Cave.  See Buddhist sculptures from the Tang Dynasty in the Thousand Buddha Cave.  Also see the Sword-Testing Rock.  Find the tearoom on the southern slope of Fubo Hill.  Stone stairs lead to the top of the hill and excellent views of Guilin.  Halfway up is the Tingtao Pavilion (Pavilion of Listen-to-Waves). 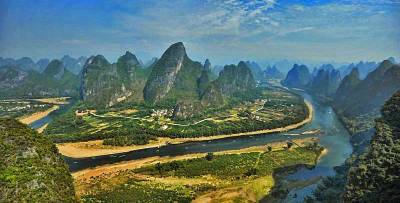 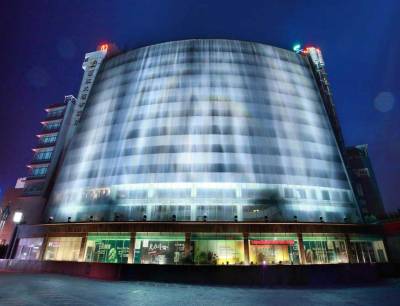 The Lijiang Waterfall Hotel sports a giant waterfall cascading from the roof top at set times.  The hotel is a on Shan Lake with views of the Sun and Moon Pagodas.  Rooms on the top floors have views of the Li River and the limestone karst mountains surrounding the valley. 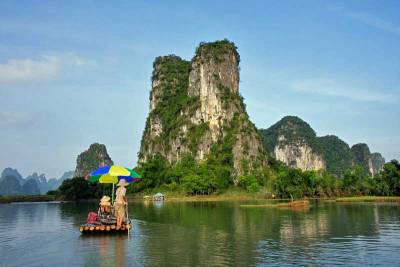 Yangshuo is about 2 hours south of Guilin on a southbound Li River Cruise.  An express bus covers the route in about  1.5 hours.  Yangshuo is the starting point for bamboo rafting on the Yulong River (Meeting Dragon River).  The town of Yangshuo includes West Street, Moon Hill Arch with its large hole through the mountain, the Big Banyan Tree and Yulong Bridge. 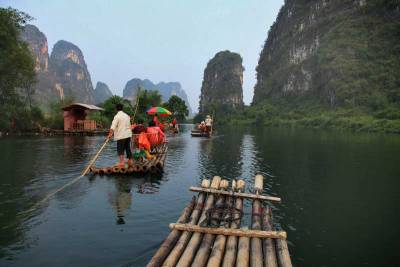 One of the most popular attractions in Yangshuo is the Impression of Sanjie Liu.  The Impression of Sanjie Liu is a large scale nightly cultural performance in an outdoor theater along the Li River.  The show involves more than 600 performers.  Other attractions in the Yangshuo area include watching Cormorant Fishing, the Shangri-la Park cultural tourist center, the Yangshuo Butterfly Cave and biking tours through the countryside.

Expect large crowds in Yangshuo.  The crowds can make bamboo river rafting challenging.  The upside is there are lots of express buses back to Guilin at the end of your day in Yangshuo. 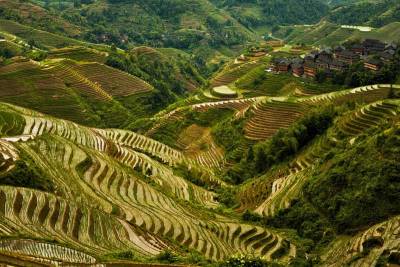 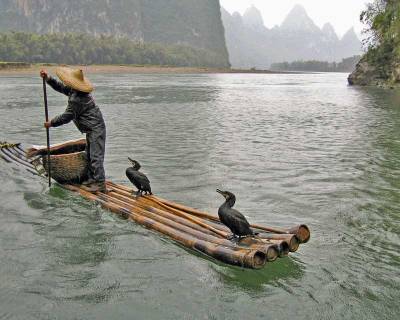 Fisherman with Cormorants, © Can Stock / aspenrock

Two Rivers and Four Lakes in the city of Guilin is formed by the Li River, Peach Blossom River, Wooden Dragon Lake, Osmanthus Tree Lake, Banyan Lake and Shan Lake.  These lakes and rivers form a ring around the city.  Tours run regularly and take about two hours.  At night, the lighting along the shore is enchanting. 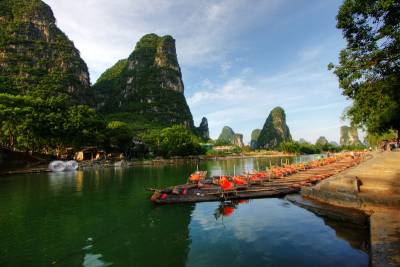 Savor the Tastes and Smells of Guilin 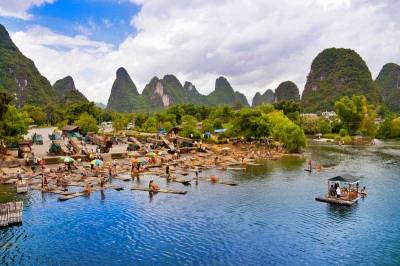 Other Sites near Guilin

Daxu Ancient Town is between Guilin and Yangshuo near the Li River.  See temples from the Qin and Ming Dynasty eras.  Nearby is Gudong Waterfall where it has become quite popular to climb the waterfall by using the iron chains bolted to it.  Crown Cave is just south of Gudong Watefall and includes its own waterfall in the cave.

Fengyu Cave is in Lipu County about 60 miles south of Guilin.  Travel by boat and by foot through nine caves.  Also near Lipu is the Silver Cave which cuts through 12 mountains.

Merryland Theme Park – about 40 miles north of Guilin is a Chinese version of Disneyland. 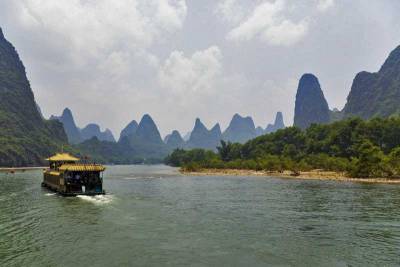 The easiest way to get to Guilin is by plane.  The Guilin Liangjiang International Airport is 45 minutes west of town.  Most flights arrive in Guilin from Hong Kong.  High speed trains reach Guilin from Nanning, Liuzhou and Beijing.  Train travel to Hong Kong is time consuming, so consider an overnight sleeper if you plan to visit Guilin by rail.  Once you arrive in Guilin, most people use organized tours because many of the popular attractions involve day trips from the city.

Summer temperatures for Guilin weather extend from May to September.  Expect average summer highs over 87 F (30 C) with average lows of about 75 F (25 C).  Rainfall is heaviest from May to July.  From December to February, highs average about 55 F (13 C) and lows are roughly 45 F (7 C).  October is likely the best time of year to visit Guilin, because temperatures are comfortable and rainfall is low.

About 1 million live in the city of Guilin, but more than 5 million people live in the urban area.  That represents a small sized city in China.  Guilin is about 350 miles inland to the northwest of Hong Kong.  The city is renowned for the karst limestone formations along the Li River (Li Jiang).  The pinnancled peaks draw visitors from all over the world. Limestone caves are also very common in the area.  Guilin is not as frequently visited as other major tourist destinations in China, but it is still very busy.  You can expect your trip down the Li River to be jammed with tourist boats enjoying the views of the limestone formations.