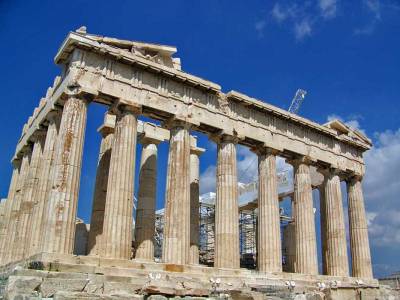 The Parthenon is the premier attraction when you visit Athens. The Parthenon is downtown on a hill top known as the Acropolis, which overlooks the modern city. The site dates back to the 5th century B.C. The intricate carvings that adorned the Parthenon were removed by the British and taken to the Royal Museum in London. Beside the Parthenon, on the hill top, is the Erechtheion, with 6 columns carved as maidens supporting the structure. The Theater of Herod Atticus is at the foot of the hill and is often used for live performances. The Theater of Dionysious and the Acropolois Museum are at the foot of the hill too. 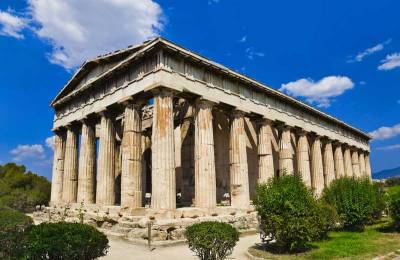 Temple of Hephaestus, © Can Stock / Violin

Below the hill top of the Parthenon are the extensive ruins of the Ancient Agora. The Agora was the market area of the ancient city for 800 years. Socrates, Aristotle and Plato walked these grounds. The Temple of Hephaestus is a highlight and is better preserved than the Parthenon. The Museum of the Ancient Agora has reconstructed the Stoa of Attalos covered walkway, so you can take a pleasant walk through the columns of the covered portico.

Along the northwest edge of the Agora is the Kerameikos or potter’s area, plus the Athens City Museum. Kerameikos is the origin of the English word “ceramic”. In the area called the Plaka beside the Agora, you will find souvenirs and very inexpensive gyros and souvlakis. The Monastiraki Flea Market happens here on Sundays. The ruins continue into the city at Hadrian’s Library. 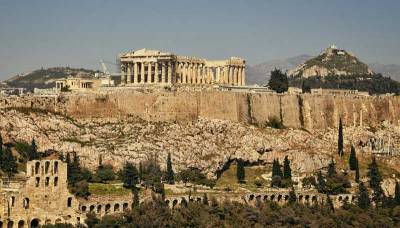 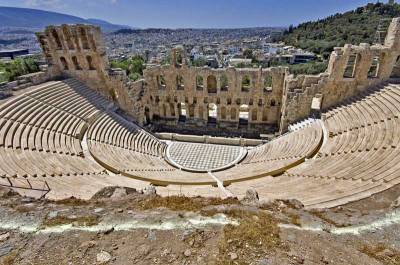 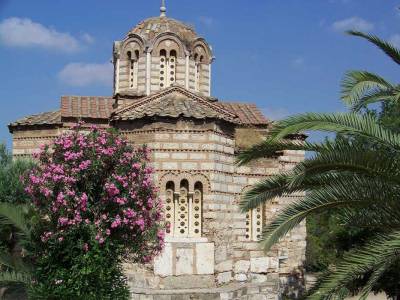 Hotels in the Plaka area at the base of the Acropolis often have roof top dining with views of the lighted Parthenon each evening. If you don’t stay at one of these hotels, try to at least have dinner at one of them. 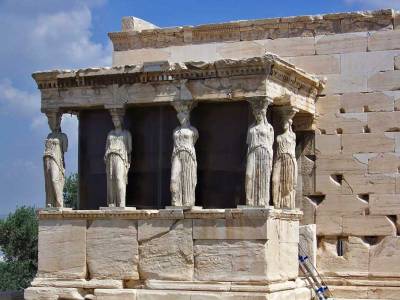 Erechtheion beside the Parthenon 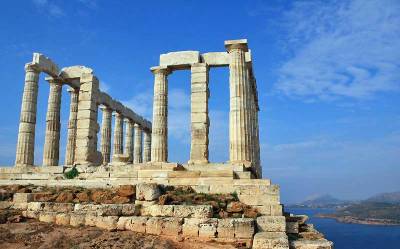 Temple of Poseidon, © Can Stock / Brigida_Soriano 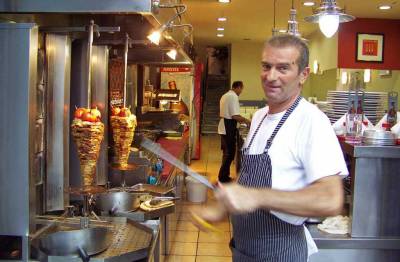 Savor the Tastes of Athens

At smaller restaurants two prices are listed – one price for takeout and another price if you want to sit down:

The Athens weather in summer makes it a popular tourist destination. Average temperatures peak in July and August at 82 F (28 C), while lows are about 72 F (22 C). The popularity of Athens weather is increased in summer because you can expect no rainfall then. From December to February average highs are 54 F (12 C) and average lows are 45 F (7 C). Rainfall is highest in the month of December. Consider spring or fall to avoid the height of the tourist season. 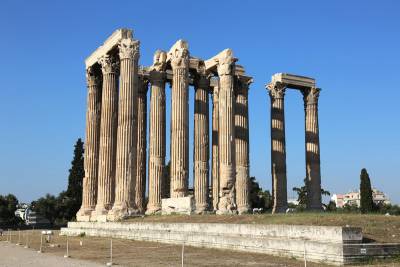 A cab takes about an hour to get to Athens from Eleftherios Venizelos International Airport (ATH). You can also take the metro train into the city from the airport. The metro can be a challenge for the novice tourist, because all the signs at the airport are in Greek. Taking the metro is a much cheaper way to get to Athens and it’s fairly quick as well. The metro takes you directly to the downtown core at Monasteraki station near the Acropolis. From there you can walk to the Parthenon and the Ancient Agora or catch another metro line to the port at Piraeus.

You can also reach the port of Piraeus on the metro system. Piraeus is basically a subdivision of Athens. Piraeus provides access to the Aegean Sea for numerous ferries and is the docking location for a host of cruise ships in the summer.

Athens is the capital and largest city in Greece. About 3 million people live here. Athens has a long history from classical Greek times to a Roman occupation and rules by the Byzantines and Ottomans. The most famous attraction in Athens is the Parthenon, which dates back to 447 BC. Athens has a long standing grievance with the Royal British Museum over artifacts from the Parthenon. Many priceless sculptures from that Parthenon, including the Parthenon frieze, were taken to London in 1801 by Lord Elgin. Lord Elgin claimed concern about the preservation of the ancient artifacts. Greece has repeatedly requested their return, but with no results.