Here’s my Intrepid Travel itinerary from Casablanca to Marrakech in February of 2011. You can book a similar trip online with G Adventures – Highlights of Morocco. 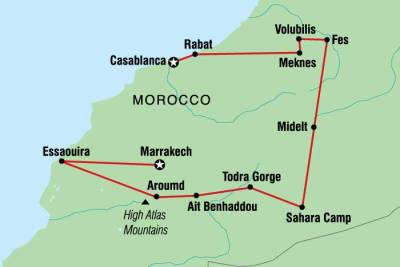 I flew British Airways from Vancouver to Madrid and I stayed at the Hotel Hilton Madrid Airport which was very nice. Then I flew to Casablanca, Morocco on Royal Air Maroc. 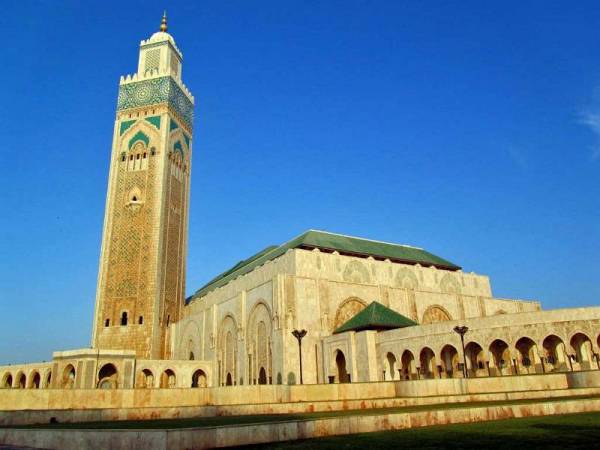 Casablanca – Start of My Morocco Tour

My plane arrived in afternoon, so I then checked in to Hotel Guynemer.  The fare was about $20 Euros and the ride was 45 minutes from the airport in to the city. Make sure it’s a real cab with proper documentation.  The hotel was basic accommodation, including mice in the walls. That evening I wandered about and visited the Sacred Heart Cathedral.  Then went with the group to dinner. The next day the group visited the Hassan II Mosque, which was gigantic. The mosque is the third biggest in the world after Mecca and Medina. It has a stadium roof that opens in the summer. That afternoon we took a train to Rabat. 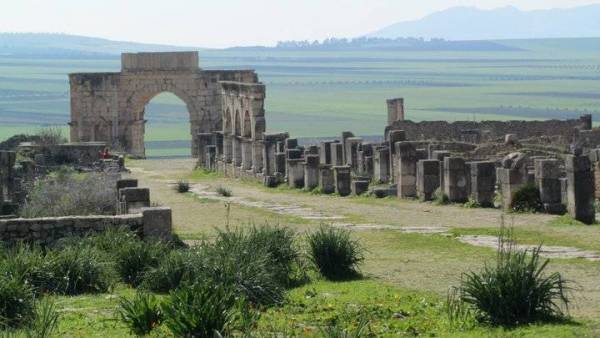 Rabat is the capital of Morocco. We spent the afternoon on a guided tour and then took the train on to Meknes.  We stayed in a fairly nice hotel, named Hotel Majestic. The next morning, we did a self guided tour.  Then we went for delicious camel burgers, which was great experience. You buy the meat at the butcher and take it to the grill to have it cooked. We visited the Moulay Ismail Mausoleum and a granary.

In Meknes we picked up our shuttle bus and driver, which we used until Essaouria. We left late day for an hour ride to Volubilis.  That same afternoon we had a one hour guided of the Roman ruins. After the tour we took our bus an hour and a half to Fes. 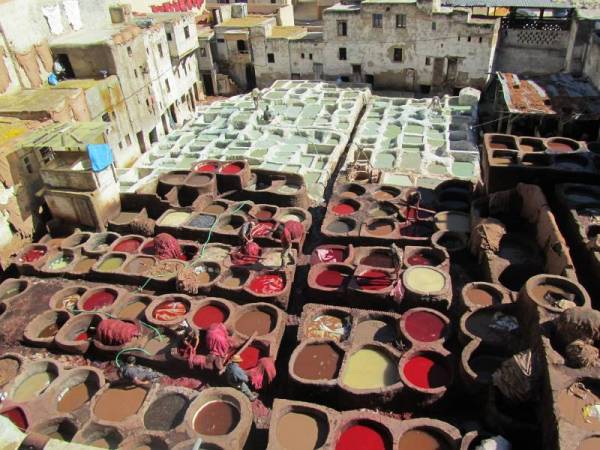 In the morning a local guide took us on an extensive day tour.  Inside the walled old city (Medina), we visited a Medersa – a school wall and open door.  They learn religion and language. Then we went to a city viewpoint and then to a ceramic & mosaics works. Then we went back into the Median (the walled old city) and visited a scarf shop.  After that we visited the world famous tannery. For good views of the tannery, you had to visit a leather shop. We also chose to add on a visit to a carpet shop, despite warnings of aggressive selling.  It was a fun experience, but then I wasn’t the one who bought the carpet.  Next we went to a traditional clothing store and tried things on.  The men had a Jelaba party – the men in Morocco all wear these on a regular basis. We stayed in a hotel that night.

The next morning we headed the Middle Atlas Mountains.  We saw a Barbary Ape on the route at a spot where tourists stop.  It’s north Africa’s only monkey.  Snow on the peaks seemed surprising, but it’s not unusual for the Atlas Mountains.  We stopped at Casbah Myriam to see the embroidery workshop.  in late afternoon we arrived  at our accommodation in Midelt. We then walked to a smaller town called Bremmem.  On the way there was a massive canyon and snow covered mountains in the background.  At the hotel in Midelt we had chicken tajine, which is a typical Moroccan dish. 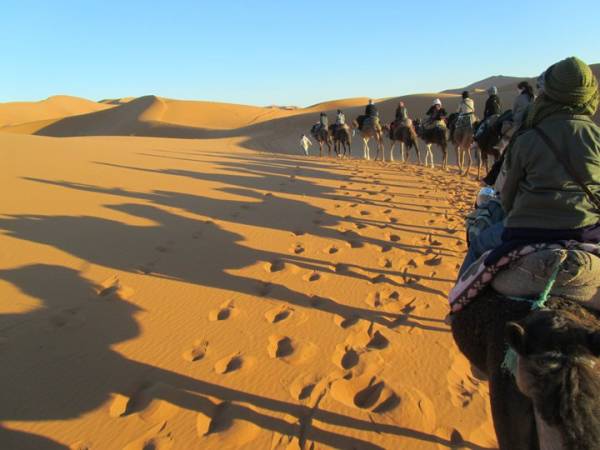 The next morning we drove 5 hours to the Sahara desert. We left the bags at an auberge and took day backs on a one hour camel trek to the camp in the Erg Chebbi Dunes.  We got there and watched the sunset.  The local camp residents made us a meal of chicken tajine.  Our tour leader carried a birthday cake on the camel for one of us.  We had a camp fire under the stars and listened to drum music by the locals.  It was freezing cold that night in our wool blankets.  After a sleepless night, I climbed the dunes to watch the sunrise.  We then packed up and rode the camels back to breakfast at the auberge.  Merzouga was a wonderful part of my Morocco Tour.

After Merzouga we traveled 2 hours to Tinejad, where we visited the Museum El Khorbat with its historrical Berber artifacts. We then traveled 2 hours to the Todra Gorge.  Our accommodation was about 10 minutes from Todra Gorge. The Gorge is along the main road.  We were tired and ate at the hotel.  We stayed two nights.  The next day had optional activities – walk through local area or hike to mountain area up.  I took the leisurely walk along the river, watching people tend crops and doing laundry.  We were invited into a local woman’s house to see hand made carpets, but this wasn’t an organized activity.

The whole group met for lunch at a local kasbah.  The rest of the day was free.  Some did rock climbing, but this isn’t for beginners.  That evening some went to a bath house.  The next morning at the hotel there was no power, but breakfast was still supplied (stoves aren’t electric).  We then drove 4 hours to Benhaddou, but stopped at Ouarzazate, film capital of Morocco where we had lunch and toured Atlas Studios. 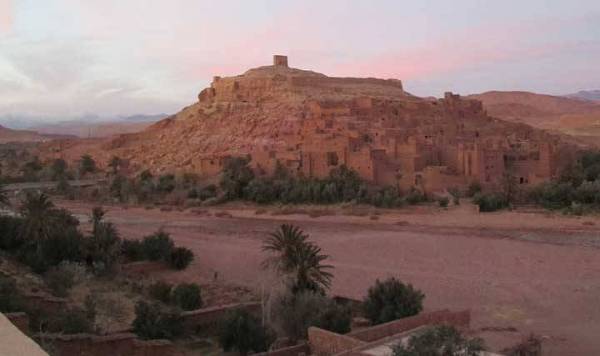 We stayed at a kasbah called the Maison d’hotes la Fibule d’Or.  We walked to the top of the fortification, which was a caravan stop.  That night we watched a cooking demonstration on cous cous and tajine by the hotel owner and his wife.   In the morning we went through Tizi N’Tichka Pass.  It’s very twisty turny road up to 2,260m during our 5 hour drive.  At the end of the road was Imlil.  There we left our bags and took day packs to our rooms, which was a one hour hike or pay for a mule ride to Aroumd.  We had lunch and took a difficult 4 hour round trip hike up to a shrine in the Toubkal National Park.  Some people book entire holidays here.  We had dinner at the jite (shared accommodation) and sat by the fire playing cards. 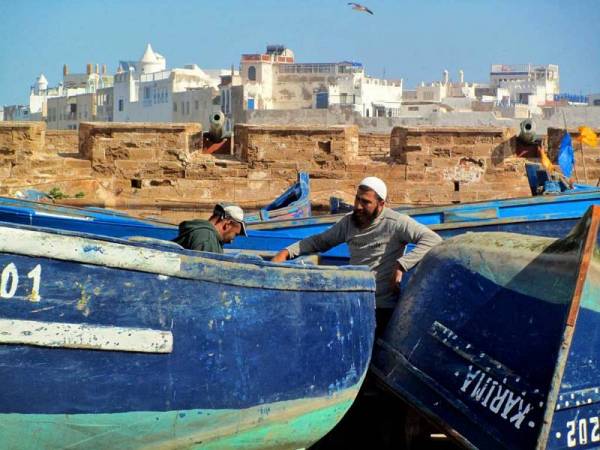 In the morning we walked an hour back to Imlil, gathered our stuff and drove 5 hours to Essaouira by driving around Marrakech. This city name is pronounced “essa where a”.   Our shuttle bus and driver left us at this point for the rest of the trip.  We stayed at the Riad Hotel dar el Qdima, which is a traditional house with a courtyard.  It had a Spanish feel to it.  They carry your luggage in wheel barrows into the walled city.

We had an orientation walk in Essaouira and then went to a roof top cafe to watch the sun set over the Atlantic.  We had crepes for breakfast.  The next morning a local guide gave us a tour in the morning of the fishing boats and the medina (walled market).  We also visited artisan coops for silver and thuya (wood).  The afternoon was free time and I chose to pay for horse back riding on the beach.  We had seafood for dinner.

The next morning was free time and we wandered about shopping.  This town was beautiful.  At noon half of us met our tour leader at the riad and we went to the fresh fish market in the medina.  We bought fish, squid and prawns then took it to the nearby grilling station where they cook it for you.  They have tables and beverages.  This was the best food of the trip and that’s saying a lot, as the food was excellent on this trip.  After lunch we collected our stuff, hired the trollies again to take us to the bus stop for the trip to Marrakech. 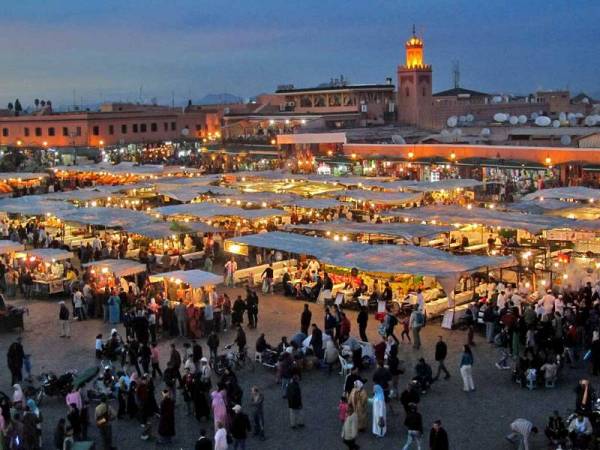 It was a 3 hour bus ride to Marrakech.  We walked 10 minutes to the Hotel Corail, probably the nicest hotel on the trip.  We went to the central square, Djemaa El Fna, where there are over 100 food stalls.  The tour included sampling from various stalls, such as udder, sheep face, snails, chicken, veggie kabobs, lamb and breads.

The next morning was free time and I paid to join a city walking tour.  On the tour we saw historical and cultural sites.  We shopped in the medina after the tour and wandered the square which has performers like acrobats and snake charmers during the day.  An hour before sunset we lined up at the entrance to the Grand Balcon Cafe Glacier and luckily were able to get a table for the perfect view of the sunset over the Djemaa El Fna.  A perfect Marrakech moment ending our trip. In the morning my Morocco Tour was complete and I headed back on Royal Air Maroc to Madrid.